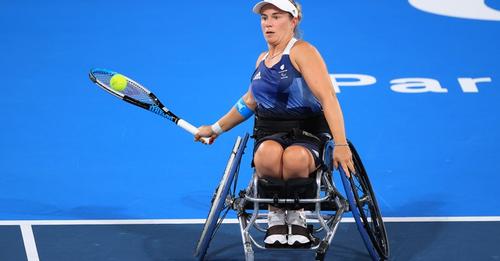 While browsing the internet, I came across the following article that is not just intriguing, but also extremely informative, which I hope you find as interesting as I did.

I continue to look and search for articles such as this as recently I had the chance to do a Sledge Hockey broadcast with Dwayne Evans that featured Canada vs the US which Carla Qualtrough came out for me to talk with the athletes.

Carla is a Paralympic Athlete and now holds the portfolio of Employment, Workforce Development and Disability Inclusion for the Liberal Government.

It was a repost from Sarah Hunter who is a good friend of mine and was seriously injured a number of years back and along with everyone who knows her understands there is nothing that will keep her from being competitive.

Enjoy the read and feel free to pass it on.

In recent years, older athletes have held a grip on tennis like never before in the Open era.

When younger players do break through, it’s big news — and speculation always runs rampant as to which up-and-comer will supplant one of the old guard.

But the side of the sport familiar to most viewers isn’t even where you’ll find the oldest competitors.

The elite-level athletes playing wheelchair tennis — which has been part of each Grand Slam tournament since 2007 — are even older than the best athletes who use their legs to play the sport.

There are still young guns, of course, including one athlete in the men’s top 10 who is just 15,1 but the career of para-athletes tends to be longer.

Wheelchair tennis is played on a court with the same dimensions as the able-bodied version, and besides the presence of wheelchairs, the only notable difference in the rules is that the ball may bounce twice instead of just once. The sport is divided into two classes: open and quad.

Athletes who have permanent impairment of one or both legs but full function of the arms qualify for the open class, whereas quad is for athletes who have additional restrictions in the playing arm that limit their ability to handle the racket and wheelchair. Many quad players will have the racket taped to their hand, for example.

In both men’s and women’s singles, the average age of the current top 102 is older in wheelchair tennis than in able-bodied tennis. The average for the top 10 in the quad division is even older.

Wheelchair tennis players are older across the board

Average age of current top 10 players* by division on the Uniqlo Wheelchair Tennis Tour vs. the WTA and ATP tours

The question, then, is why?

Four-time Paralympic athlete Lucy Shuker of the U.K. — at 41, the oldest woman in the top 10 of the wheelchair division — spoke to FiveThirtyEight from Melbourne, where she is competing in the singles and doubles divisions at the Australian Open.

She thinks part of the reason for the higher average age is that wheelchair tennis athletes have historically come to the sport later in life than their abled counterparts — often through injury, like she did.

“In wheelchair tennis, unless you’re coming through from, maybe you’ve had either an accident at a really young age, or whether you have been born with a disability, the normal path into the sport is then that you don’t follow the traditional route,” she said.

Shuker started playing after a motorcycle accident at 21. She credited prior badminton training as part of her success but said many athletes she sees are “coached into the sport,” as opposed to being spotted for their natural talents as able-bodied children.

Sarah Hunter, a retired Canadian Paralympian and current provincial coach for British Columbia, was identified at a camp after an ice hockey injury shifted her focus from wielding a lacrosse stick for the national team to wielding a tennis racket.

“I tried a number of sports there, and tennis is what took my attention immediately,” she said. “I absolutely loved it. … I was able to enter a really good program with an exceptional coach right away, and it just took off. It just became a full-time gig for a lot of years.”

Seventeen to be exact, in a career that began in her mid-30s and ended in 2017 only after a serious back injury forced her to stop.

Hunter said she thought the trend of wheelchair tennis players being older may be starting to shift, partially because the types of disabilities elite athletes have are starting to change.

While spinal cord injuries used to be more common among wheelchair players, more and more have congenital conditions or disabilities that tend to come along earlier in life:

Two-thirds of the semifinal athletes across the singles divisions in the past two Paralympic Games had congenital conditions; that was true of only one-third of the wheelchair tennis singles semifinalists who had publicly declared their disability types in the 2004 Olympics (the first for the quad division).

Hunter also believes that the greater intensity of the sport has a part to play in why wheelchair tennis is trending younger.

“It’s a different type of wear and tear on the body,” she said. “I think you’re going to see players start retiring much faster than they used to because every quadrennial, the training gets more intense. There’s higher expectations for the quality and number of tournaments an athlete needs to play in.”

Indeed, one of the biggest storylines in this year’s Australian Open is that it will be the last tournament for quad division leader Dylan Alcott, who has won seven straight titles in his native Melbourne.

He will retire at 31 even though the average age of the current top 10 quad players is nearly six years older and his rivals include a pair of considerably older Americans, David Wagner and Bryan Barten, who are 47 and 48, respectively, as well as 58-year-old Kyu-Seung Kim of South Korea.

In 2021, Alcott won the “golden slam” — all four Grand Slam tournaments plus the Olympics gold medal — as did the top women’s player, Diede de Groot of the Netherlands, who is 25.

But although those two stars dominated their divisions last year, their career win rates (82 percent for Alcott, 83 percent for de Groot) are comparable to those of the best players in the stand-up game: Rafael Nadal, for example, has a win rate of 83 percent.

The landscape for wheelchair tennis may be changing, but there are good reasons for it.

“I think as the sport is becoming more and more popular and, you know, there’s prize money, there’s the grand slams, Paralympic medals,” Shuker said. “As it’s becoming bigger in the media, I think naturally it’s going to attract more players — and the younger players who are physically strong and want to get into the sport.”

“As a disability sport, I think you’ll always have those people that have maybe come to the sport later in life as a result of an accident, like myself.”

Flaws But Not Deal Breakers