Trail Smoke Eaters hockey team recently marked a 5o years anniversary for the team who represented Canada at the 1961 World Hockey Championships bringing the Cup home with a squad of Amateurs who traveled to Switzerland and were inducted into the BC Sports Hall Of Fame in 1976.

The team of lesser-known players were comprised of local Trail players who were making their first appearance at the World Hockey Championships previously in 1939 finishing second in the tournament.

They competed against the Montreal Maroons who won the National Championship; but due to unforeseen circumstances were unable to travel to Switzerland which allowed the Smoke Eaters to represent Canada and ironically were able to add additional players to the roster.

For a bunch local of players playing the game in the moments when they were unemployed and not working and being family guys that went to beat the powerful Soviet Union.

Saturday March 13th marked 50th Anniversary for the 1961 team who defeated Russia pulling off an impressive win for the World Championship marking 50 years since the Smoke Eaters captured the championship.

Bobby Kromm (32) coached the team bringing together the team that traveled to Geneva and Lausanne doing an exceptional job bringing Gold home to Canada.

He advanced his career to coach in the CHL then moving on to the World Hockey Association (WHA) spending two seasons with the Jets to the 1976 World Hockey Avco Cup Championship. 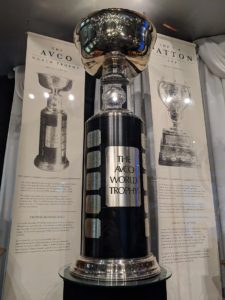 He advanced to coach the Wings winning the Jack Adams trophy for Coach of the Year (1977-78) winning 16 more games than the previous season, sadly  passing away at 82 years young in June of 2020.

The team’s roster from 1961 featured some players who advanced to have an exceptional career in various chosen fields.

The City of Trail and its Historical Society features the Jersey’s from that era to relive the 1961 World Championship team.

Feel free to visit the Trail historical society and relive that era in bringing home the World Titles by visiting “trailhistory.com.

Donations of sporting equipment, photographs and other memorabilia relating to sports in Trail are gratefully accepted. Please contact the Trail Historical Society at 250-364-0829 or history@trail.ca