With the Maple Leaf’s town playing the second of two games the passing of Walter Gretzky hit the team heard and in conversation around the press box you get the sense of disbelief to everyone who he has ever come in contact with throughout the years.

The photo on the home page was taken off the Leaf web site  and was on the bench prior to the Canuck game tonight and I felt it was only fitting to post the photo which to me showed so much class for the Leaf organization.

As the world continues to fight COVID-19 many in the world have lost loved ones that were the back-bone of the family that many looked up to for guidance and direction.

This by no means is meant to detract from the role of your Mother as she is the one that offers help and sets in place your life long focus allowing you to achieve success in your later life.

Sports plays a key role in today’s world helping everyone to develop skills that allow them to possibly reach the pro level of any game as long as they listen, learn and follow what they are told by their coaches.

Pro players have more pressure placed on them in today’s world from all or many media outlets in order to sell their game to attract fan’s for fun as well as money they all spend.

When we lose a family member it’s like being hit by a truck with pressure placed on them by their fans while they try to stay strong for their family members.

Last evening the sporting world was told of the passing of Walter Gretzky (82), Father to NHL  retired Superstar Wayne Gretzky. 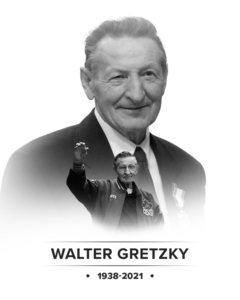 Wayne and his Father Walter were close as he spent time with a young Wayne helping him play a sport that he truly loved and wanted to make a career in, which he did.

He is known as a true hockey dad who watched Son Wayne have an exceptional career turning pro at 17, first playing in the rival World Hockey Association which was touted to be second class to the NHL.

Wayne began his career playing Junior B for the Metro Junior B Hockey League, then advanced to play with Peterbourgh Pete’s before moving on to Soo Greyhounds.

He was signed by the WHA Indanapolis Racers (78-79) for the first part of the season finishing with the Edmonton Oilers finishing the season with a record of 43 goals, 61 assists in 72 games.

As a teenager Walter met Phyllis Hockin whom he married in 1960 and were married for 45 years who had five children Wayne, daughter Kim and Son’s Keith, Glen and Brent.

Wayne, sister Kim and three brothers Keith, Glen and Brent were raised in Brantford 15 miles southeast of Canning where he (Walter) built the rink Wayne learned to skate which was located about 12 miles from the North River of his grandmother’s farm.

Walter was born October 8th 1938 and the fifth of seven children and raised in Canning, Ontario on the family farm and was known as a good high school athlete who excelled in track and field but was a better hockey player known as a goal scorer while playing Junior B in Woodstock but was unable to make the Junior A team as he came down chickenpox.

Wayne once mentioned that his Father was the reason I loved hockey and he inspired me to be the best I could be in not only the game, but also life.

The winter when Wayne was four, his father turned the backyard of their Brantford home into a rink that young Wayne called The Wally Coliseum.

Walter decided to make his own rink to avoid having to freeze standing outdoors at some outdoor rink elsewhere — or sit in his car with the engine running to get some heat — while Wayne skated. Gas was too expensive, he said.

Walter was close in every step of his Son’s career, starting from his days in minor hockey to his pro debut in the WHA then to the NHL, a career where he would win four Stanley Cup’s with Edmonton.

He went on to play for the LA Kings, St. Louis Blues and New York Rangers where he finished his career setting NHL records for most regular-season goals (894), assists (1,963) and points (2,857).

Walter was also a highly sought after-dinner speaker at charity functions and was named to the Order of Canada in 2007 for his contributions to minor hockey in Canada and dedication to helping myriad local, Provincial and National charities.

He was chosen as the final-day Olympic torch-bearer for the 2010 Vancouver Winter Olympic Games that saw him pass the Olympic Flame to son Wayne who lit the cauldron for the opening ceremony.

He continued “We will miss him so much, but know that he’s back with our Mom and that brings me and my family peace and he was truly the Great One and the proudest Canadian we know. “We love you Dad.”

Walter Gretzky was close to every step of his son’s career, from his days as a minor hockey phenom through his professional debut in the World Hockey Association and into the NHL.

He would go on to win the Stanley Cup four times with the Edmonton Oilers; play for the Los Angeles Kings, St. Louis Blues and New York Rangers; and set NHL records for most regular-season goals (894), assists (1,963) and points (2,857).

Walter Gretzky was named to the Order of Canada in 2007 “for his contributions to minor hockey in Canada and for his dedication to helping myriad local, provincial and national charities.”

In 2010, he was a final-day Olympic torch-bearer for the Vancouver Winter Games, after Wayne Gretzky lit the Olympic Flame at the opening ceremony. “For me, he was the reason I fell in love with the game of hockey. He inspired me to be the best I could be not just in the game of hockey, but in life,”

Wayne Gretzky tweeted Thursday. “We will miss him so much, but know that he’s back with our Mom and that brings me and my family peace.”

The Edmonton Oilers released a statement, extending their sympathies to the family. Wayne Gretzky played with the team from 1979-88.

“On behalf of the Edmonton Oilers Hockey Club, I extend our deepest sympathies to the entire Gretzky family on the passing of Walter Gretzky,” said Oilers chairman Bob Nicholson.

“The fabric of our franchise has been woven by some of the most influential players, coaches and executives the game has known and included in that too, are the loved ones that make our team a family. 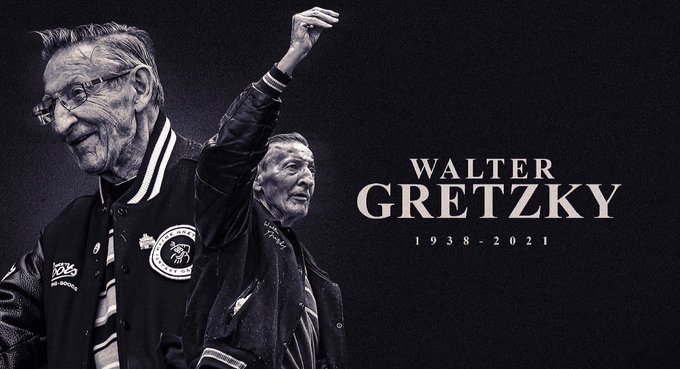