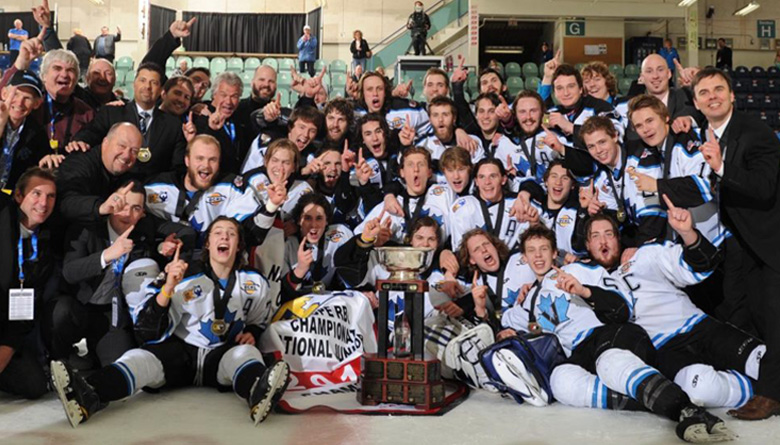 The 2011-12 Penticton Vees team who won the Fred Page Cup, Doyle Cup and National Championship, while also setting the record for the longest winning streak in Canadian Junior A history, will be inducted into the BC Hockey Hall of Fame on July 22.

That season, the Vees won 42 consecutive regular-season games from November to March.

The roster featured current-day NHLers like Mike Reilly (Boston Bruins) and Troy Stecher (Los Angeles Kings), as well as many other notable pros such as Michael Garteig and Steven Fogarty.

“Every championship team has a unique story behind it,” said Vees President, General Manager and Head Coach Fred Harbinson, who was behind the bench for that historic year. “The 2012 team created so many storylines, while breaking many of junior hockey’s records along the way. It will be great for the fans of Penticton to have a chance to see that group of players come back for what should be an outstanding weekend.”

Despite their record-breaking year, the Vees were challenged in the postseason.

The Chilliwack Chiefs pushed them to six games in the first round of the BCHL playoffs.

The Merritt Centennials took a game from them in round two, before Penticton swept the Powell River Kings in the Fred Page Cup Finals.

The Vees beat the Brooks Bandits of the Alberta Junior Hockey League in five games to capture the Doyle Cup, then lost their first two games of the National Championship tournament.

Despite the setback, the team eventually reached the final and won the title after a 4-3 victory over the Woodstock Slammers of the Maritime Junior Hockey League.

This year’s Hall of Fame ceremony is the first since 2019 after the past two were postponed due to the pandemic and is technically the class of 2020.

The ceremony will take place on Friday, July 22 at the South Okanagan Events Centre.

The BC Hockey League has announced the schedule for the 2022-23 regular season.

The league’s 61st season will begin on Friday, Sep. 23 and finish on Sunday, Mar. 26 and will once again consist of 54 games for each team.

The schedule currently does not include dates for the BCHL Showcase, where each team plays two regular-season games. A full Showcase schedule will be announced at a later date.

This year’s schedule includes 83 per cent prime-night games on Fridays and Saturdays. This includes a handful of buildings that restrict Friday and Saturday game nights.

Before the pandemic, the league hovered around 65 per cent over five years.

This allows for more practices, gym time and more recovery time for BCHL athletes, bringing the schedule closer to a college hockey format.

An exhibition schedule will be announced at a later date.