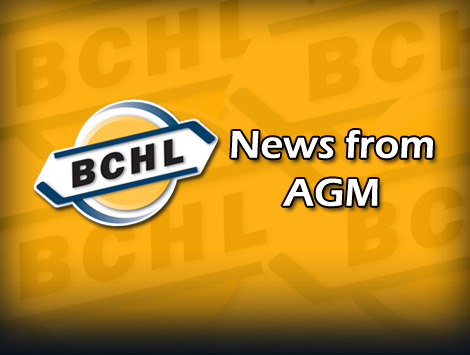 We published part one from the BCHL AGM and now publishing the second part for your reading with thanks to the Jesse Adamson, Media Relations BCHL

The BC Hockey League held its Annual General Meeting May 26 and 27 in Salmon Arm, B.C. The league’s Governors discussed and approved several initiatives regarding officiating, scheduling and a wide variety of other topics.

The Board of Governors approved the creation of a BCHL Officiating Development Program.

The stated goal of the program is to focus on developing current officials, recruiting future officials and retaining the best officials by creating a professional environment.

“The BCHL is a development league,” said Director of Officiating and Player Safety Brad Lazarowich. “Of course, this refers to developing players to move on to the next level, but it also includes our officials. We want to give our officials all the resources they need to reach their full potential and to eventually see them move on to the college and professional ranks, just like our players.”

The league unveiled the winners of two year-end awards at the Annual General Meeting.

Victoria Grizzlies Governor Ron Walchuk was voted as the BCHL’s Executive of the Year.

Walchuk is a member of several league committees, including the Executive Committee, Franchise Committee and Futures Committee. The winner was determined by a poll of league Governors.

“Ron’s thoughtful contributions to multiple committees have been a major asset for the league,” said Graham Fraser, Chairman of the Board of Governors. “We thank him for his time and effort over the past year and congratulate him on this well-deserved recognition.”

The BCHL also announced the co-winners of the league’s Marketer of the Year Award. This year’s recipients are Allison McCarthy, Corporate Sales and Event Manager for the Trail Smoke Eaters, as well as Chris Laurie, President of the West Kelowna Warriors.

The award was determined by a poll of marketers from across the BCHL.

“Allison personifies what a sports marketer should be,” said Barry Douglas, Vice President of Business Operations and Governor for the Chilliwack Chiefs as well as the Chairman of the BCHL’s Marketing Committee. “She is creative, has a team mentality and a passion to fill the Cominco Arena with Smoke Eaters fans”

“As for Chris, his vast experience in marketing is paying off in West Kelowna. He has led the path to re-energizing Warriors hockey in a major market in our league”

“We are very proud of Allison, Chris and all the hard-working marketers across the BCHL.”

In addition, the Governors approved several motions involving other BCHL awards. The league will announce the renaming of three awards, as well as the addition of a new year-end player trophy in the coming weeks.

The Board has approved the 2022-23 regular-season schedule, as well as the schedule of events for the upcoming season.

The regular season schedule will be released on Thursday, June 9th and details surrounding BCHL events will be announced in the coming weeks.