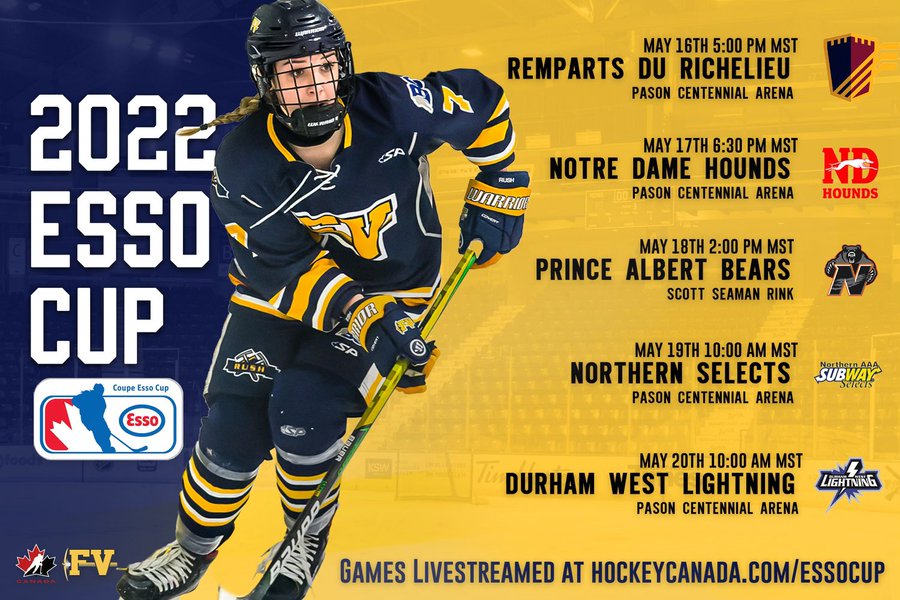 While hockey is winding down given that the Canucks, the Giants as well as both junior leagues women’s hockey is alive and well.

For starters from our perspective it’s great to see women’s sports continue to grow probably due to the fact that my daughter played women’s hockey in North Delta dating back to 1977 that seemed to be the start for the women’s program.

Locally we have an impressive group of young ladies playing on the Fraser Valley Rush are currently playing in Okotoks Alberta for the Esso Cup at the Pason Centennial Arena with all games being played in Mountain Zone Time.

The facility was built in 2006, this 1,500 seat, 2,000 person capacity arena is one of the premier facilities in the Alberta Junior Hockey League.

It is surrounded by a full 2 lane walking & running track, Pason Centennial Arena is also home to Okotoks Minor Hockey, Okotoks Lacrosse, and special events held in Okotoks throughout the year.

The Fraser Valley Rush Female are a U18AAA team and a member of BC Hockey Female U18AAA League, which is the top female U18 players in British Columbia.

Putting any team together isn’t an easy task and while under the guidance of GM Al Wozney, Head Coach Tony Lindsay and Assistant’s Tony Wong, Marilyne Cloutier, Shayne Green, Nicole Wong, Kelly Leroux and others this group was built for winning!!

Winning their local championship was followed up by a three game series against the Edmonton Panda’s, which they not only defeated, but outplayed their opponents from Alberta.

The game featured exceptional end to end fast paced action by players of both teams, but in the end one team would prevail and that was the Rush.

They made their trip which given the cost for gas one might say that they clearly paid their dividends representing British Columbia.

The event started May 16th with their first game against Remparts de Richelieu that saw them pull out a 4-1 win outshooting their opponents 55-21 with both teams unable to capitalize on any PP while New Westminster’s Clara Juca was rewarded with the win.

Winning builds confidence and while it’s true that a team can get over confident the coaching staff were making sure that this would not happen.

Their second game was played the following evening at 6:30 pm against the Notre Dame Hounds in a game that would remain scoreless through the first two periods.

The third saw aggressive play continue but it was the Rush that got on the scoreboard that saw Vienna Rubin break the scoreless draw at 12:13 forcing the Hounds to pressure the Rush.

As much as they tried, they were unable to get quality shots while being kept to the outside with the Hounds pulling their “tender” in the late stages of the period.

With the net empty and the puck getting free it was Aynsley D’Ottavio who jumped on the loose puck sending it in the open net that saw the Rush pull out the 2-0 win.

This game saw a change in “tenders” as North Delta’s Rebecca Noble was between the pipes giving her the shutout 2-0 win that saw the Rush outshot the Hounds by an impressive 35-24 margin.

A pair of wins in their first two games and with confidence on their side the competition would only get stronger, but the  young ladies were up for it.