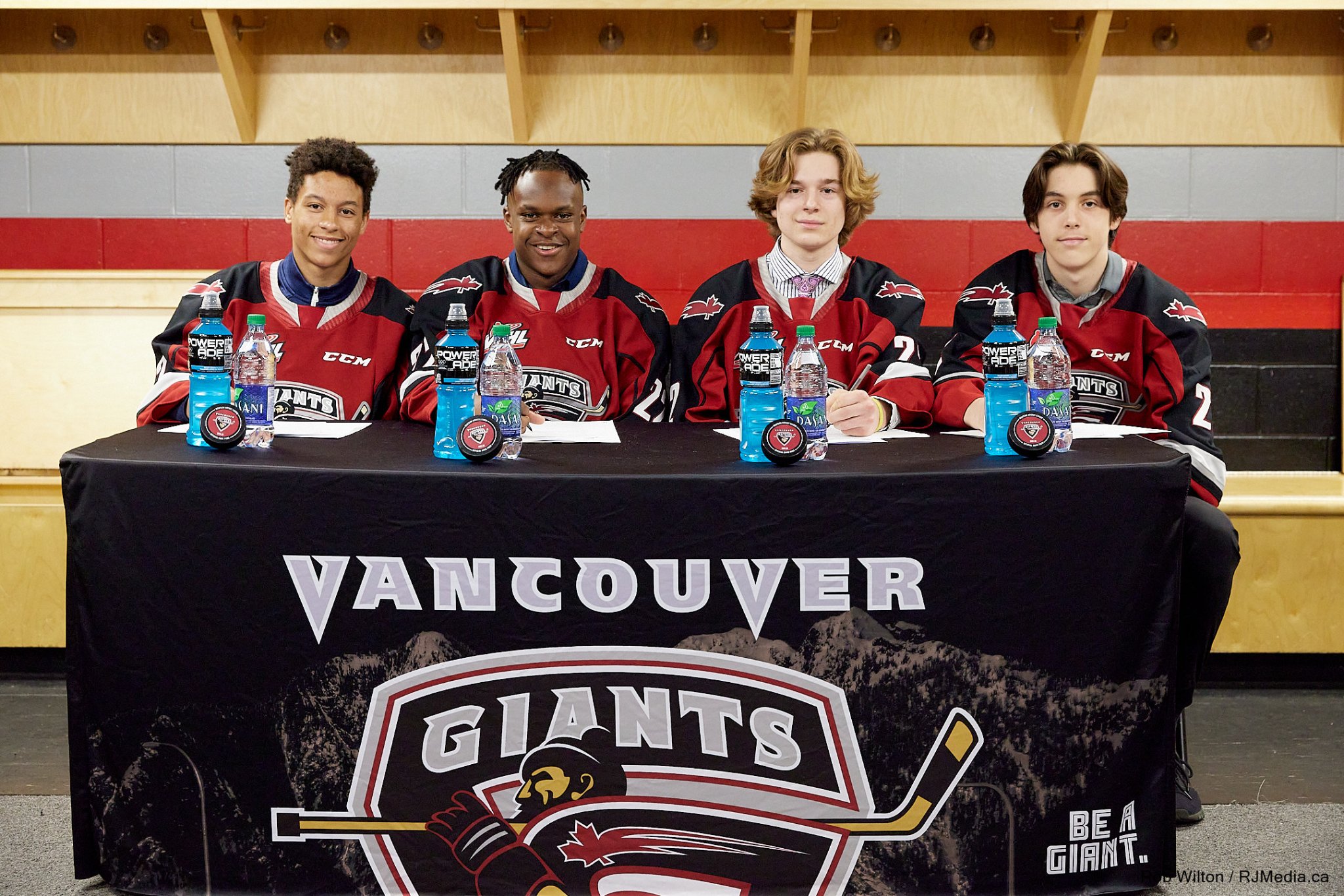 The Vancouver Giants introduced their top Bantam picks in the recent WHL draft which included three (3) first round picks and second round selections which has not happened since 2005.

Cameron Schmidt was selected seventh overall by the Vancouver Giants in the 2022 WHL Prospects Draft.

The 5’8” right-shot forward spent last season with the Rink Academy Kelowna U15 program.

He also appeared in one game for the U16 team and three games with the U18 team, recording two goals with each team.

Cameron Schmidt mentioned “It’s an incredible honour to sign with the Vancouver Giants and to start this new chapter of my hockey career and I’m looking forward to meeting my new teammates and taking part in my first WHL Training Camp.”

Parneta added “We are ecstatic to have Cameron join our organization to further his hockey development. He is a dynamic, offensive player with a great shot and his exciting skill set will bring fans out of their seats.”

In order to select Obobaifo with pick #19, the Giants traded up two spots in the draft trading the 21st and 70th overall picks to the Saskatoon Blades.

Obobaifo mentioned “It’s very exciting to sign today with the Vancouver Giants and a lot of great players have come through this organization and I can’t wait to get started. My family and I are grateful for the opportunity.”

Parneta mentioned “Aaron’s competitiveness and work-ethic is off the charts. He’s an excellent two-way player with great offensive upside and skating ability. We were thrilled to be able to trade up in the draft to select him.”

In 28 games, he managed 19 goals, 27 assists along with 8 PIM’s and dressed in five playoff games recording one goal and two assists.

Oreskovic mentioned “I’m very excited to sign with my hometown WHL team,” “I’ve grown up watching the Vancouver Giants play, and I’m honoured to have the opportunity to put on a Giants jersey and begin the next step of my hockey career.”

Parneta added “Jacob brings a solid mix of size and skill to the table and we scouted him closely this season, and really like his character, work ethic and on ice leadership and were thrilled he was still available to us at #22.”

He also played in five games with the U16 team collecting one goal and one assist and was the first D-man selected by the Giants in the 2022 Prospects Draft.

Parneta added “Colton is a big-bodied, versatile, mobile defenceman who can contribute in all areas of the ice. He’s got strong character and a bomb of a shot from the point. He’s going to fit in very well on our blueline in the seasons to come.”

As under-age players all four are eligible to play in up to five games next season with the Giants until their respective regular seasons come to an end with their CSSHL teams.