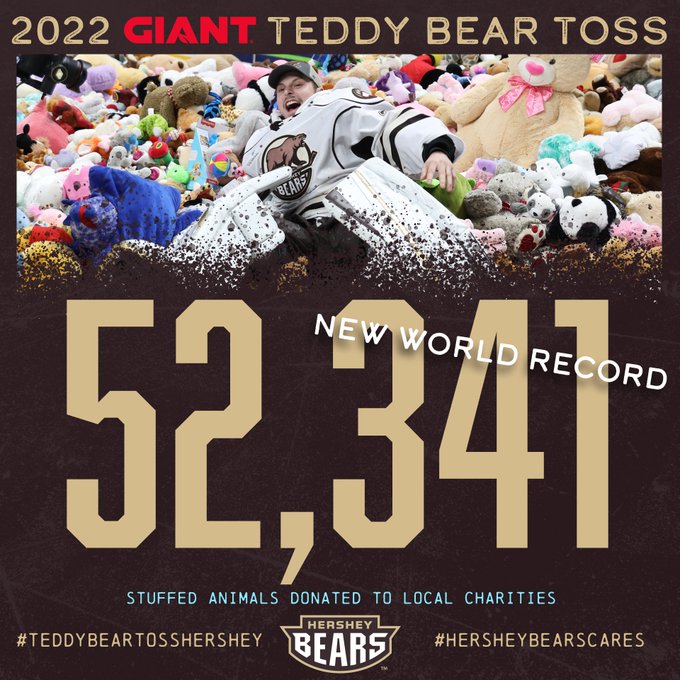 Each year we are fortunate to watch several teams feature what has become the “World Famous Teddy Bear Toss” but none will ever hold the world record – except the Hershey Bears.

In their recent 5-0 win over the Hartford Wolfpack they shocked the world and set a new world record Saturday at Giant Center, but it wasn’t for what the Bears did on the ice; but rather after they scored the game’s first goal.

Making it a record in the hockey history was Axel Jonsson-Fjallby who was fortunate to be the one to open the scoring at 6:13 while his team was on a PP that saw thousands of Teddy bear’s tossed on the ice.

Each year the event is held and has raised international attention as the Bears host a Teddy Bear Toss night where fans bring stuffed toys and are allowed to throw them on the ice after the team scores its first goal in the game and on this night it was Jonsson-Fjallby who sent the stuffed toys flying on the ice.

All of the bear’s will be donated to over 25 local organizations and distributed to children in the greater Hershey area and this year they set a new world record of 52,341 stuffed toys raining down.

Jonsson-Fjallby told the media after the game “I feel like you want to be on the ice for that first goal” and ironically had just returned to Hershey after a stint with the Capitals this past Thursday.

Wolf Pack head coach Kris Knoblauch also mentioned “The excitement in the building, the fans, the Teddy Bear Toss, I thought that [Hershey] played an excellent game and we did create some scoring chances, and when we did, their goalie [Pheonix Copley] played outstanding.”

Last season due to COVID-19 the event prevented the Bears from hosting the Teddy Bear Toss and it goes to say that this is one of the toughest tickets on the team’s home schedule.

While the team did have a drive-by toy collection last season, the organization’s front office spent months planning the in-arena return of the event.

Zach Fisch, Bears manager of media relations and broadcasting mentioned “It takes a village, and we have a ton of volunteers. We count them very quickly. It’s a very robust operation who make it a very smooth and make it the viral sensation that it is.”

Continuing to mention “Kudos particularly to [marketing coordinator] Meredith Bair in our offices for her hard work as well as Kathy McGraw as part of our corporate communications team [with the Hershey Entertainment & Resorts Company]. [They] do a lot of the heavy lifting.”

If we reflect back a few years it appeared that both the Bears and the WHL Calgary Hitmen were competing with each other mainly after the Hitmen had set a new world record.

Not to be outdone in 2019 the Bears outdid the Hitmen with 45,650 toys  and according to Fisch “it gained in popularity as Hershey fans.our fans want to win, but with the Calder Cups, we only hang Calder Cup banners.”

It does appear that that’s the mantra of the fan base and once they set the world record, it just continued and turned into an event each year everyone wants to be a part of, which is no different from the Vancouver Giants Teddy Bear Toss.

Hershey first entered the AHL in 1938 and have become committed to not only staying in Hershey, but also becoming a winning franchise and to date has won 11 Calder Cup championships.

While there are other Teddy Bear Toss events they are nothing compared with the one in Hershey, for a couple of reasons.

The first is the overall size of the building and second is  due to the restricted access for tossing the Bears on the ice, due to the netting around the rink.

Sad to think about, but full codo’s to Hershey on setting this record – but can they break it next year!!!

“‘Let’s not only be the world-record holder, but let’s also extend that kindness, that caring, that compassion that our town was built on, and let’s be the world record holders and put that many more smiles on kids’ faces from this event.’