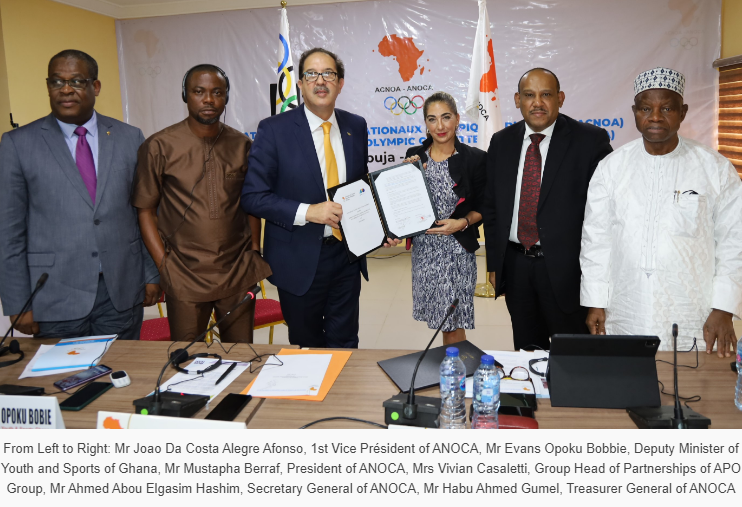 We continue to get info on various levels of sport from all areas around the globe, some of which have a profound impact on athletes who are focused on attending the Olympics.

We have recently received the following press release and wanted to share it with the sporting community.

The partnership was sealed Saturday in Abuja, Nigeria, during the 20th Ordinary General Assembly of ANOCA, by the President of ANOCA, Mustapha Berraf, and Vivian Casaletti, Group Head of Partnerships of APO Group, who was representing the Founder and Chairman of APO Group, Nicolas Pompigne-Mognard.

ANOCA is an international organization based in Abuja, which brings together the 54 African National Olympic Committees. ANOCA’s work includes:

In 2026, Africa will host its first ever global Olympic Games when the Summer Youth Olympics are held in Dakar, Senegal.

The partnership will see APO Group support the wider ANOCA organization, as well as the individual Olympic Associations of all 54 African nations, helping them gain international media coverage and achieve greater visibility.

The pinnacle of sport in Africa

The Olympics Movement represents the pinnacle of global sport, and ANOCA is the supreme governing body of the Olympic Movement in Africa.

The organization strives to showcase sport as the ultimate expression of life and healthy competition amongst nations.

ANOCA collaborates in harmony with Governments in every African nation, focussing particularly on creating opportunities for young people through sport.

By placing sport at the heart of education and social cohesion, ANOCA helps to motivate and inspire young people all over the continent.

APO Group and ANOCA have a shared vision for African development through sport, with both organizations passionate about providing support for young or disadvantaged people.

“APO Group are the best at what they do in terms of their media network and expertise, and their track record for championing sport in Africa is also exceptional. It is a natural step for them to be joining the Olympic Movement in Africa.

We are thrilled to be entering into this partnership, as it means greater prominence not only for our member associations, but for every African athlete competing on the Olympic stage,” said Mustapha Berraf, President of ANOCA.

“I want to thank ANOCA, and in particular President Berraf, for giving us this wonderful opportunity to be involved in African sport at the very highest level,” said APO Group Founder and Chairman, Nicolas Pompigne-Mognard (www.Pompigne-Mognard.com). “From the moment we met, it was clear we shared a vision for using sport to enrich people’s lives all over the continent. I look forward to a long collaboration, where we can shine a light on the Olympic Movement Africa, and give it the global audience it deserves.”

Africa currently has 50 Olympafrica centres and an African Olympic Academy.

The Olympafrica Centres are dedicated to caring for African youth through sport, by coaching young people in the Olympic values of solidarity, fair play and sharing. Since its inception,

The Olympafrica Foundation has contributed to the popularization of the Olympic ideals across the African continent, and its mission highlights the importance ANOCA attaches to this flagship project.

Millions of young Africans benefit from quality support enabling them to blossom in their environment and contribute to the influence of African youth.

ANOCA’s 2022-2025 strategic plan makes it possible to strengthen the impact of the Olympic Movement in the education of youth, the improvement of living conditions, and better quality of life for all thanks to the opportunities offered by the Olympafrica Foundation.

ANOCA has also set up a number of events and support programmes for African athletes, including:

ANOCA is also making serious preparations for African athletes to participate in the Winter Olympic Games, and has signed a partnership with South Korea for the training and preparation of athletes for the next Winter Youth Games.

This a Joint Press Release by APO Group and the Association of National Olympic Committees of Africa (ANOCA).