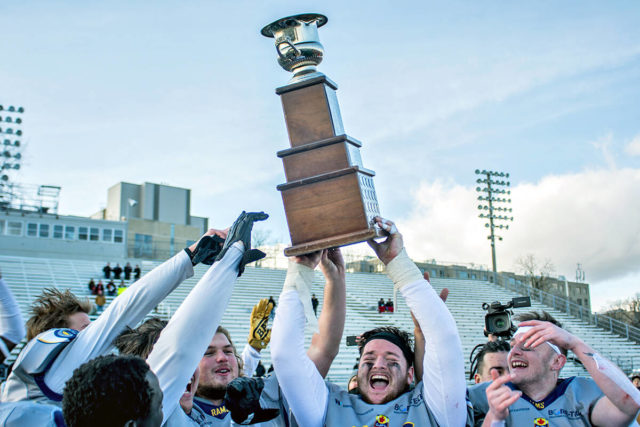 Football in the lower mainland dates back to the early  beginnings in 1953 for the BC Lions when they managed to grab their first win, score their first TD then moving from Empire Stadium to  BC Place as well as winning six Grey Cup Championships.

From the early days football has grown in popularity at the minor youth level of the game as well as growing at the high school level of play.

Given the fact that the game is far more popular in the US than in Canada one can only wonder what the CFL has to do to make this more family friendly than in a few cities.

Expansion was to take place on the East Coast but Covid-19 put that on hold with no current time to kick things off and attract the families?

The recent Grey Cup was one of the more exciting finals in some time and depending on what team you were pulling for this game took extra  time to determine the outcome.

Locally the Langley Rams took their game east playing against the London Beefeaters with many supporters cheering on their hometown Beefeaters hoping for a win.

In this year’s CJFL championship the Rams took a huge bite out of the Beefeaters spoiling any chance of a victory for their counterparts in Ontario.

The Rams played typical Rams football managing to pull out a commanding 37-0 win in the 113th Canadian Bowl at Western University’s Alumni Stadium.

The stadium was renamed due to a $1.4 million donation from the Western Alumni Association who currently outnumber 300,000 and with this the stadium and the lounge names will be for at least the next 10 years.

The Rams are coached by former CFLer Cory Philpot and has been heavily involved in  amateur football coaching since his retirement from the Lions in the 1990s.

Philpot has worked with the Seaquam Seahawks and had the chance to coach both his twin sons Tyson and Jalen who are expected to be high draft picks in the 2022 CFL Draft.

Focusing back on the South Delta  Sun Devils it was interesting to note that star QB was Michael Calvert who playing in his first season with the Rams after playing with the UBC T-Birds was also named as the Canadian Bowl’s Offensive MVP after completing 144 yds and a TD.

It’s fair to mention the Rams defense collapsed the Beefeaters O-Line with 10 QB sacks while not forgetting that both former Sun Devil Adam Hoegg (one sack) as well as Nico Ouelette were in the line-up.

For anyone playing a high level of football all should know that having a strong “D” is imperative to the line-up as well as getting  a strong performance from everyone.

Langley advanced to the final with a 7-4 win defeating the Okanagan Sun in the Cullen Cup BC final, then put the boots to the Saskatoon Hilltops 17-14 at McLeod Stadium.

Daniel Kubongo (CJFL Rookie of the Year) returned a punt back 85-yards for a major that saw the score double and was also named the Special Teams  Player of the Game.

Michael Calvert managed a 15-yard TD to Mario Johnson putting the Rams up 30-0 but in the fourth quarter Derek Best ran in for the final scoring of the game.

Players of the Game