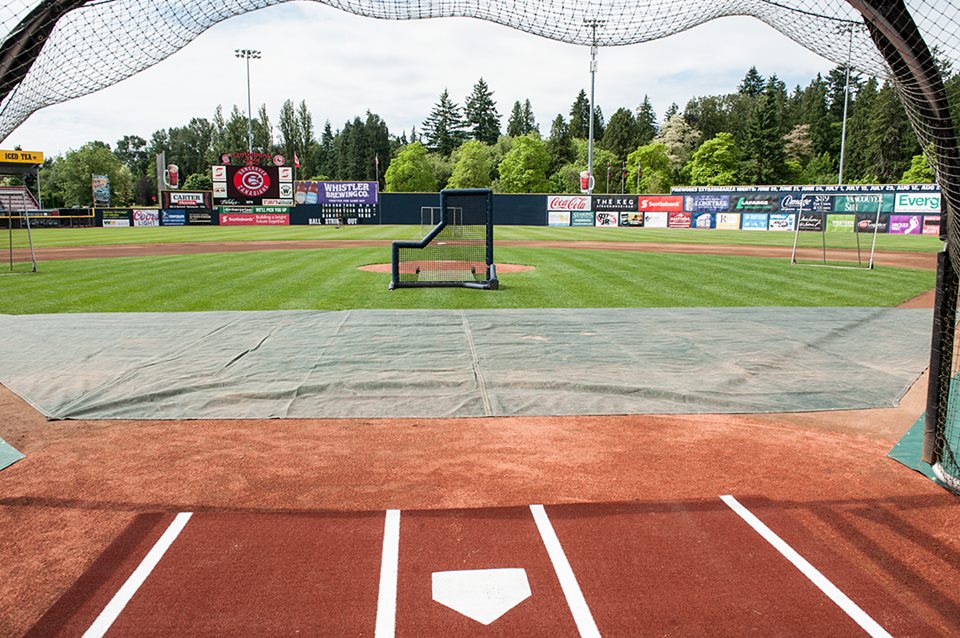 The struggling Vancouver Canadians are and will remain on the road finishing the season in Hillsboro, unless things quickly change for the better.

There is no second guessing that we as the fans have missed the sights and sounds of Scotiabank Field at Nat Bailey this summer and all are hoping that next season, they’ll be on their home diamond.

Having conversation with Tyler Zickel, Broadcasting & Media Relations Manager  earlier in the season we had mentioned that we want to keep you up to date on their “strange” season to date.

Three consecutive two out home runs in the first inning spurred the Vancouver Canadians to a 9-4 win over the Tri-City Dust Devils (Angels) Thursday night at Ron Tonkin Field.

With runners at second and third and two outs, Luis De Los Santos slugged his team-high twelfth home run of the year to dead center field to make it 3-0 Vancouver.

Will Robertson followed with a solo shot on an 0-2 pitch before Davis Schneider smacked his seventh dinger of the season for back-to-back-to-back jacks, the second time the C’s have hit consecutive homers in the last week (Zac Cook and Rafael Lantigua did the honors on Sunday in Everett).

After Tri-City got a solo home run of their own in the second, the Canadians got that run back in the third.

Spencer Horwitz doubled to extend his hitting streak to nine straight games, went to third on a fly out then scored when De Los Santos hit a grounder to third base that put Vancouver ahead 6-1.

The Dust Devils scored a run in the fourth and two in the fifth to pull within two, but that would be the closest they’d come. A run scored in the bottom of the fifth on a balk, Andres Guerra doubled home a run in the sixth and Horwitz brought in another score that inning with a sacrifice fly to make it 9-4 C’s.

On the mound, Paxton Schultz (W, 4-4) was solid through five innings in which he scattered seven hits, allowed four runs, K’d five and didn’t walk a batter. Will McAffer (H, 3), Hagen Danner and Roither Hernandez combined on four scoreless innings of relief and allowed just one hit between them.

Vancouver aims to even the series on Friday night. CJ Van Eyk gets the nod for the C’s and will be opposed by 2021 first round pick Sam Bachman. First pitch is set for 7:05 p.m. on the Sportsnet Radio Network. Individual tickets, 12-game plans and season tickets for home games in Hillsboro are available now at CanadiansBaseball.com.

After a seven-run inning doomed the Vancouver Canadians on Tuesday, it was a five-run fourth that poisoned the C’s chances to even the series as they went on to lose 6-3 to the Tri-City Dust Devils (Angels) Wednesday night at Ron Tonkin Field.

Leading 3-0 thanks to a run on three singles – including an RBI base hit from Spencer Horwitz – in the first and a two-run shot from Sebastian Espino in the third, Vancouver starter Sem Robberse (L, 0-2) surrendered five runs (two earned) on four hits and three walks in the fourth though got no help from the defense; they made three errors in the frame to help the Dust Devils go ahead 5-3.

Tri-City added a run in the sixth to go up by three.

Horwitz logged four hits for the second consecutive night while Espino matched a C’s season high with a knock in ten consecutive games. Tanner Morris extended his hitting streak to a personal-best nine consecutive games while Will Robertson has a hit in eight straight.

On the mound, Hayden Juenger led the way with two perfect innings of relief. Thomas Ruwe made his High-A debut and twirled a scoreless ninth.

The Canadians send Paxton Schultz to the hill on Thursday night as they look to bounce back after losing the first two games of the series.

A seven-run inning proved fatal for the Vancouver Canadians in an 8-5 loss to the Tri-City Dust Devils (Angels) Tuesday night at Ron Tonkin Field.

With the game tied 1-1 to start the third, Tri-City erupted for seven runs on seven hits – six of which were singles – over 12 batters to take an 8-1 lead.

Despite the deficit, Vancouver bounced back and gave themselves a chance to tie the game multiple times but couldn’t quite cash in.

The C’s responded to the crooked number in the third with three runs of their own in the bottom of the inning. Tanner Morris and Spencer Horwitz started the stanza with singles to put runners at the corners for Orelvis Martinez, who singled home a run to make it 8-2.

A wild pitch put men on second and third before Will Robertson sent a deep drive to center that was caught for a run-scoring sacrifice fly then Sebastian Espino delivered an RBI single to bring the C’s within four.

Base hits from Horwitz and Robertson in the fifth inning preceded an Espino sacrifice fly that ran the score to 8-5, but three different opportunities to tie the game – two on with no outs in the seventh, a pair of runners aboard with two outs in the eighth and a lead-off double in the ninth – sputtered as the C’s dropped game one of the series.

Tri-City started the scoring in the second with a solo home run from Beaverton, OR native Kenyon Yovan before the Canadians tied it in the bottom of the frame with a walk, two singles and an RBI groundout from Eric Rivera.

Eight of nine C’s starters had a hit. Horwitz became the fourth Vancouver hitter to log four hits in a game (three singles and a double) while Espino – the reigning High-A West Player of the Week – extended his hitting streak to nine consecutive games, the second-longest streak by a Canadians player this season. Robertson and Rivera have now hit safely in seven straight.

Game two of the series is set for Wednesday night. MLB.com’s #21 Blue Jays prospect Sem Robberse makes his second career High-A start for the C’s and will be opposed by lefty Ky Bush of Tri-City.

First pitch is scheduled for 7:05 p.m. on the Sportsnet Radio Network. Individual tickets, 12-game plans and season tickets for home games in Hillsboro are available now at CanadiansBaseball.com.