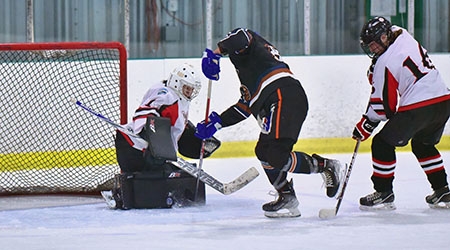 The Fraser Valley Jets took three of a possible four points in Week Six, getting back to the .500 mark on the South Coast Women’s Hockey League season.

The Jets played to a 3-3 tie with the South Fraser TNT in their first of two games played Saturday night at Planet Ice – Coquitlam.

Lindsay DiPietro opened the scoring in the first minute of play, giving the Jets an early 1-0 lead. Less than four minutes into the game.

Alisha Choy netted a pair of goals 28 seconds apart to vault the TNT into a 2-1 lead after one period of play. Choy leads the SCWHL in goals scored with seven.

Chelsea Wilson tied the game for the Jets in the second period, but again South Fraser responded quickly. Just 24 seconds after Wilson’s third goal of the season, Tiffany Chiu restored the TNT lead.

Jackie Lang scored the lone goal of the final frame, allowing the Jets to tie the game and earn a single point. Fraser Valley outshot the TNT 37-25.

Fraser Valley fired 54 shots on the Capitals’ net, while Jets netminder Stacey Wilson made 17 saves on 18 shots for the win.

Wilson netted a hat trick for the Jets, raising her season total to six, one off the league lead. Lang, DiPietro, Shay Gronnemose and Chelsea Barron also scored for Fraser Valley, which at 2-2-1 is in sixth place in the nine-team league. Lauryn Lee netted the goal for seventh-place

Their week began Thursday with a 3-1 loss to the North Shore Rebels at the Moody Park Arena in New Westminster. Despite getting outshot 45-13, the Capitals were tied with North Shore late in the game.

The Rebels snapped a 1-1 tie with a game-winning goal from Emily Froese with 80 seconds to play. Jess Sibley added an insurance goal 26 seconds later.

In the fourth game of Week Six on Saturday evening at the Richmond Ice Centre, the Richmond Devils found themselves in the lead four times yet had to settle for a 6-6 tie with the Meadow Ridge Moose.

Emily Costales paced Richmond with three goals, with Lauren Miller adding a pair of scores and one assist. Ashley Specht completed the goal scoring for the home team, currently in fourth place at 3-3-1.

Kirsten Langston, Emily Bajkov and Sydney Kreps scored twice each for the Moose, placing them in second place at 4-1-1..