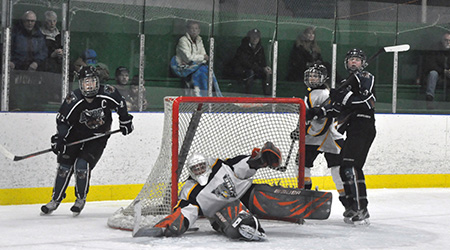 Six games featuring eight of its nine teams are on the schedule in Week One of the South Coast
Women’s Hockey League regular season, which begins Saturday, Oct. 1 in three cities.

The two teams clashed on the final day of the Ekanite Consulting/SCWHL Provincial
Championship Tournament in Hope, B.C. last spring, with the Moose topping the Vibe 3-1 to
claim third-place in the six-team tournament.

Meadow Ridge will be led by last season’s SCWHL goaltender Megan Buchanan, a former
member of the Chatham University Cougars (2011-14) in Pittsburgh, PA. From Stittsville, ON,

Buchanan played in 14 regular season games with the Moose last season and posted a 1.79
goals against average and a .938 save percentage.

The Vibe also feature a Most Outstanding Goaltender award winner. Ashley Fischer won the
trophy in the 2017-18 season.

Cassidy Bell of the Rebels won the SCWHL Most Outstanding Player Award for 2021-22, her first
season in the SCWHL.

A native of Baldonnel, BC (just outside of Fort St. John), Bell joined the Rebels after five
years (2016-21) with U Sport’s McGill Marlets.

The Devils will begin their 2022-23 season in the Greater Victoria area, playing two games
against the Island Surge.

Games times are 9 p.m. Saturday at the Panorama Rec Centre, and 11:20 a.m. Sunday at the Esquimalt Arena.

The SCWHL canceled the 2020-21 season due to the global pandemic, and the Island squad suspended operations for the 2021-22 campaign.

Jue, from Richmond, B.C., was in her first season in the SCWHL after playing four seasons in the
NCAA with the Cornell University Big Red (2006-2010) and four years in China with the KRS
Vanke Rays (2017-21).

The former University of Alberta Panda (2013-16) was second in league scoring with 10 goals and 27 points in 22 games played.

The South Coast Women’s Hockey League is comprised of nine Senior AA female teams, and is a
member of BC Hockey and Hockey Canada.