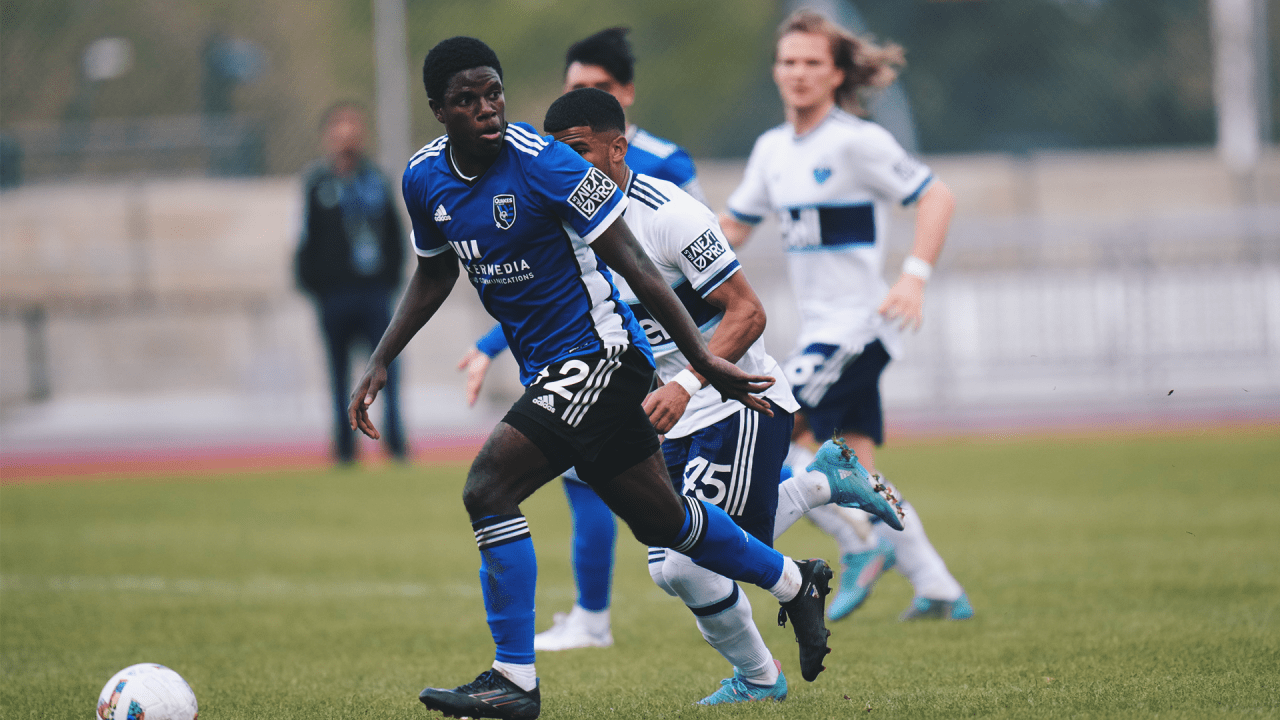 Whitecaps FC2 won for the third straight match a 2-0 win over the west coast opponents from San Jose Earthquakes FC 2 squad at moving into second place in western conference standings of the MLS Next Pro League.

Game’s notes quick start for Vancouver Elliano Brienza on a nice through ball from Vasco Fry in the second minute and slotted home to give the Caps a 1-0 lead as Brienza fired it home top corner past Eric De LaCerda.

This was followed by a corner kick won by Vancouver as the cross as the Earthquakes cleared the ball out of danger in the 15th minute.

But solid play by the Vancouver back four were able to keep it clean and clear it out of danger in the 18th minute as the game settled down to an evenly played match by the sides on the pitch.

In the 27th minute the first real threat by the Earthquakes was a corner kick left hand corner that was punched away by Caps keeper Eric White to keep a 1-0 game in favor of Vancouver as the space became tight with the marking.

Vancouver’s back four have been outstanding including a solid play in which the right fullback came back to help his team taking the ball away from three San Jose players deep in the final third of the pitch clearing it out of danger in the 34th minute.

The final 9 minutes in the opening half saw San Jose press Vancouver spreading the coverage wide causing problems in the penalty area with scoring attempts cleared by the “D” as they went to the half with Vancouver FC 2 holding a 1-0 lead.

Vancouver made their first substitution in the 45th minute as Simon Becher replaced Jay Herdman (son of Canadian men’s coach John Herdman) playing on the FC 2 squad this season.

San Jose made their first sub in the 52nd minute as Cruz Medina replaced Diogo Baptista managing to get the ball deep in the Caps penalty area causing problems for the Caps.

Vancouver had chances in the 68th and 69 minutes with excellent crosses in the Earthquakes penalty area testing Eric De La Cerda keeping the game lead.

San Jose gained control and possession of the match forcing Vancouver into mistakes and giveaways testing the Caps FC 2 squad late in the match and as Vancouver received cautions to Jay Herdman of Vancouver in the 83rd minute and Vasco Fry in the 85th minute.

Vancouver to equalize the match creating turnovers in the midfield and gaining space in the Caps penalty area as the 4th official announced 4 minutes of extra time.

Extra time saw Vancouver get a break in the 90 plus minute as Pedro Vite extended their lead to 2 nil securing the victory winning their third straight match to (3-1-2) on the season.

They move up in the western conference in second place while San Jose fell to 1-5-1 and continue to struggle remaining in 8th Place in the west.