Canadian soccer players are making a name for themselves on the world stage and the  two most notable are Kadeisha Buchanan and Alphonso Davies who were Canada Soccer’s Players of the Month for August..

Both  were instrumental in helping their pro clubs with UEFA Champions League titles closing out the 2019-20 season. 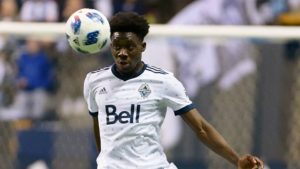 A four-time winner at FCF Olympique Lyonnais and Alphonso Davies wins for a first-time managing a win with his FC Bayern Munich squad.

Buchanan (24) is the two-time Canadian Player of the Year played in all seven of Olympique Lyonnais’ UEFA Women’s Champions League matches in 2019-20.

She is the only Canadian player managing to win four European club championships, in four in consecutive years since her pro debut in 2017.

In August, she played every minute at centre back as Lyon knocked off Bayern in the Quarter-finals, Paris Saint-Germain FC in the Semi-finals, and VfL Wolfsburg in the Final. 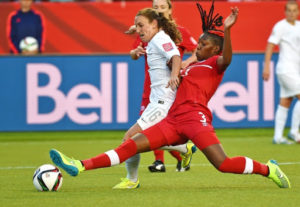 Sunday’s final saw Buchanan up against top the offensive threats from the German champions, including the Bundesliga’s back-to-back scoring champions Ewa Pajor and Pernille Harder.

Buchanan and teammates came out on top with a 3:1 victory, lifting the European trophy to complete their 2019-20 treble which also featured League (Championnat de France) and Cup (Coupe de France) titles.

To no real surprise to those that follow the Whitecaps who have watched Davies (19) on the pitch at BC Place and is the first Canadian soccer player to win the men’s UEFA Champions League title.

His play for the month of August, saw him play at left back as Bayern knocked off FC Barcelona in the Quarter-finals in all 90 minutes in the Semi-finals against Olympique Lyon  and the final against Paris Saint-Germain FC.

To no real surprise he was extremely impressive against FC Bayern managing to grab an assist against FC Barcelona in the Quarter-finals.

Both Buchanan and Davies pulled out wins in their finals, while Huitema and Lawrence each reached the Semi-finals of the 2019-20 UEFA Women’s Champions League.

August saw Lawrence, the 2019 Canadian Player of the Year play a full 90 in the Quarter-final and Semi-finals.

While on the home pitch travel will take them to the 2020 Canadian Championship Final which is being played across the Canadian Premier League’s Island Games and Major League Soccer’s first phase.

The Canadian Championship Final will be unique featuring one team from the Canadian Premier League and one from Major League Soccer.

It took a while but Jessie Fleming officially made her pro debut albeit as a sub for Chelsea FC that saw them win the 2020 FA Community Shield  with a 2:0 victory over Manchester City FC.

Don’t forget to mark the three upcoming Whitecaps matches on your calendar with the first against Toronto September 5th.

Thanks to Soccer Canada for the press release