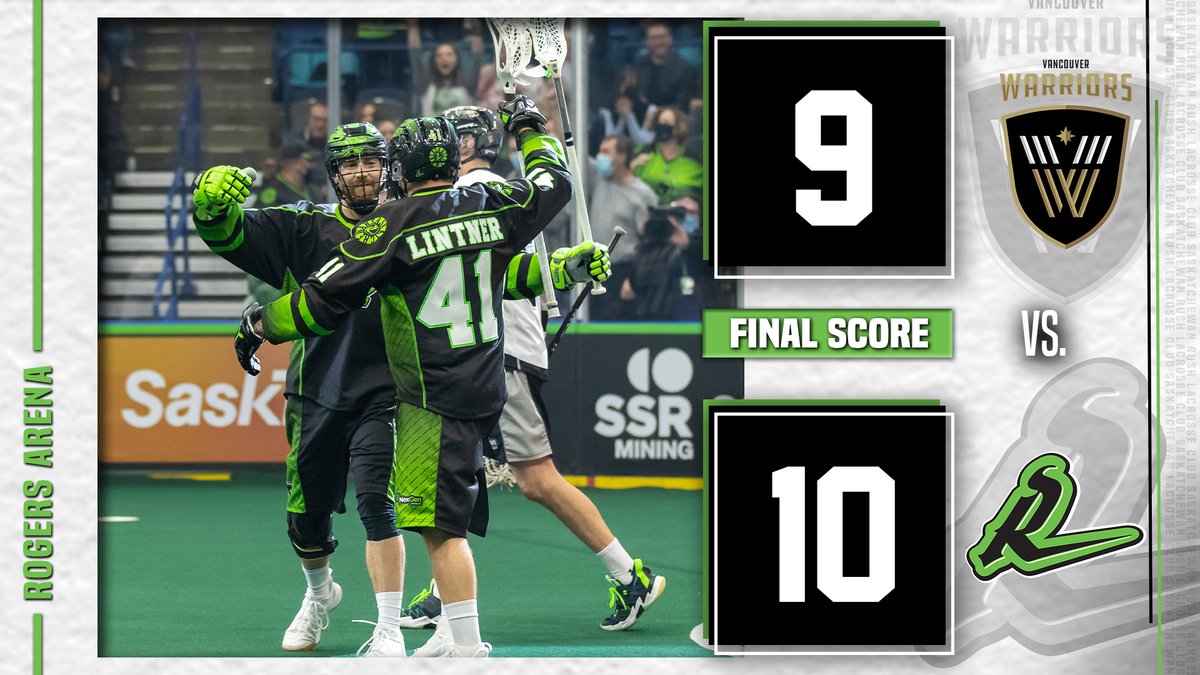 Locally the Vancouver Warriors returned to Rogers arena playing their first game in 657 days dating back to February 29 th 2020., hosting the winless Saskatchewan Rush who dropped their first two of the season.

The Warriors won their first two road games with a 8-7 win over San Diego and 14-8 over the expansion Panther City.

Vancouver, however, came up short losing with a 10-9 decision despite carrying the first and fourth quarters, but dropping the second and third came in the match.

Vancouver had a solid opening quarter, opening the game off the webbing of Ladner’s Mitch Jones (23 seconds) followed up with one from Coquitlam’s Keegan Ball at 3:40

Mark Mathews got the Rush on the board for Saskatchewan at 4:17 cutting the lead to 2-1 only to have Jones score his second of the night at 10:44 extending the Warriors lead 3-1.

Keegan Bal added his second of the game late in the quarter at 13:08 giving them a commanding 4-1 lead after the opening quarter holding an 8-6 edge in shots.

Saskatchewan’s offense “kicked-in” in the second quarter managing to score six straight against the Warriors “D” which proved to be the difference maker in the final outcome of the game’s final score.

Saskatchewan scored 6 goals on 13 shots showing that their “D” was not only outstanding, but as strong as any other “D” as they faced 16 Vancouver shots holding them scoreless.

Shots at the half were 24-19 for the Warriors who were unable to score during a span of 16 minutes and 52 seconds heading to halftime.

Vancouver managed to score in the third quarter at 7:59 with Marty Dinsdale cutting the Rush lead to 7-5 bringing the crowd back into the game.

They got within one on the PP  at 10:41 that saw Mitch Jones collect his hat trick goal that was set up by Kegan Bal making it a 7-6 game with the Rush holding a one goal lead.

Mark Mathews and Ryan Keenan scored a minute apart to restore the Rush lead back to two goals taking a 9-6 lead into the fourth quarter.

The Warriors were down three and also trailed in shot department (36-24) after three quarters, but would own the fourth quarter outsourcing the Rush by a 3-1 margin.

Kegan Bal completed his hat trick on a pair of goals a minute apart with the first of the quarter and third of the game at 9:22 managing to add his fourth of the night at 10:16, but not enough for a Warriors win.

The last 4 minutes saw the Warriors cause havoc in the Rush end of the floor outshooting the Rush 14-9 in the final quarter.

They did however have a goal disallowed in the final minute and came within an inch of tying the game, but this clearly wasn’t in the game plan for their home opener.

The game officials had a quiet night assessing only seven minors, four to the Warriors and three to the Rush all of which were minor’s.

Vancouver held a 14-9 edge in shots in the fourth quarter and fell to the Rush by a narrow 10-9 margin, which saw the Rush outshoot the Warriors by 45-38.

The Warriors fell short on the night dropping the first game of the year and home opener dropping to 2-1 in the West standings that saw the Rush improve to 1-2 on the season.

Vancouver’s next home game is scheduled for January 7th when they host Colorado with the face-off set for 7:30 pm

As one might expect this could all change given the recent surge in cases with Covid-19 and the new variant and rules put in place by the Provincial Government.