The elimination of the “heavy favorites” in Canada’s hockey domination for the 2020-21 hockey season saw both Edmonton and Toronto get ousted from further playoff action.

The shock has the hockey world in an upheaval not knowing why or how this could happen, but truth be told the above two mentioned teams were simply outplayed.

In one of the strangest hockey seasons we can ever remember with the Canucks and Montreal getting hammered with COVID-19 that saw a stoppage of games throwing the game and the league in the “sin-bin” putting it on ice for a period of time.

The hardest hit team were the Canucks which thankfully was controlled by a team of professional medical personnel under the strictest guidelines.

We are left with two teams in Canada to which the Canadiens after being down 3-1 in the series were able to stage an incredible comeback against the top team in the NHL north down.

The game seven 4-3 win in Toronto saw them knock out the top ranked Leaf’s moving on to face Winnipeg for the first time to who survives and advances in the postseason. 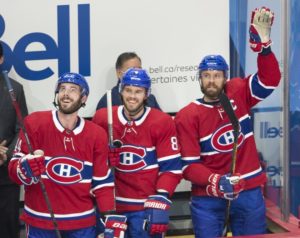 The fourth place Canadiens will play the Maple Leaf’s in this historic series which is the first time dating back to 1964 in which both teams have met in the postseason.

In the original six teams in the NHL, Toronto won the first of three straight Stanley Cup finals in a playoff run between these two historic teams.

As was the case in 1964 when Montreal trailed the Maple Leaf’s by a similar 3-1 game’s setback facing the same fate managed to fight back to eliminate the Leaf’s game 7 of the series.

This past season saw Winnipeg finish third in the North Division that saw them face the high octane powered Edmonton Oilers led by the NHL the scoring leader Connor McDavid along with Mike Smith between the pipes.

The series saw the Jet’s out work their rivals from Edmonton Oilers as a cohesive unit in a playoff series between the teams in NHL history.

Oddsmakers had the Oilers as favorites having an explosive offence from all four lines coming off a great regular season seeing them advance in the seven game series.

The Leaf’s strong offence paid off in the first four game’s which saw them take a 3-1 series lead, but the strong aggressive play of Montreal saw them rebound pulling off the series win led by veteran netminder Carey Price.

Montreal mounted an impressive comeback forcing their youngsters to press the Leaf’s into making mistakes allowing them to get timely scoring from all four lines to advance to the North Division final against Winnipeg.

Throughout the seven game series they shut down the vaunted attack of the Leaf’s top line which featured Austin Mathews, Mitch Marner (who has  a contract through to the 2024-25 season) not giving them time or space allowing them to make any key plays in either zone.

In the end it was veteran Carey Price who gave them the strength to complete the comeback win in Toronto in front of just over 550 front-line workers for the win also noting that Montreal also welcomed over 22,500 fans two nights prior.

The Canadiens played an emotional seven games in 12 nights against Toronto having only one night off before heading to Winnipeg to play Games 1-4 over a six-day span; which includes one back-to-back.

As the playoffs race continues to see who will lift Lord Stanley’s Cup back to Canada for the first time since 1993 as the Habs were the last Canadian team to win the cup.