Vancouver enters tonight’s game having a record of 1-3-0 this season and are set to put another “W” in the column before heading to Calgary for another re-match in two days.

With the Canucks coming off a win two days prior it’s imperative for them to follow up on the style of play that they played in a game that many saw as a desperation game for many on the team.

Following the casual dress Saturday it seemed to be a moment that took any pressure off them, in part due to the confidence press release on Twitter put out by ownership.

That alone builds confidence and can boost the morale of any team.and in the case for the Canucks simply put – they needed it!!!

Getting the first goal of the game was essential for Vancouver, which came after Hughes hammered one from the point that saw Pearson getting his 5th at 3:52 sending one past a surprised Markstrom one second after the minor expired.

If you watch the break-out for Vancouver you will notice that on most plays they get the puck up to center, then drop it back to the “D” for them to set up the play entering the zone mostly to the corners.

This has been an on-going theme for many of the games and if fans can see this develop, quite possibly so can the opposition or one would think so.

Vancouver jumped out to a 2-0 lead on a nice three-way passing play set up from the point with Miller sending a slap-pass to Boeser who tipped it to Horvat who scored his 4th of the season.

With the first coming to an end Vancouver allowed saw ex-Giants Milan Lucic (4th) get the Flames within one with the Canucks trailing in the shot department by a narrow 8-7 margin.

One can guess what was mentioned between periods other than don’t allow a turn-over’s allowing the Flames free shots on Demko, but apparently not everyone got the memo. 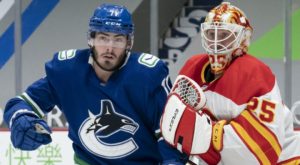 The second was anyone’s period with both teams having various chances that saw aggressive play around both nets, which caused both “tenders” problems they simply never expected.

The see-saw battle continued with both having various chances and it wasn’t until 10:47 that a bad cross pass at the blue-line was intercepted by Lindholm allowing him on the left side giving Flames a new lease on life.

The Flames continued to press and with one one of the strangest clearing plays you’ll ever see as Schmidt took a pass from Demko behind the net trying to send it up the middle hitting Demko deflecting off both skates to Dube giving the Flames the lead.

Demko pulled off a couple of impressive saves off both Gaudreau and Tkachuk keeping the game within reach for Vancouver who continued to press only to be turned aside.

With only 30 seconds left Boeser was set up on the left side by Myers who took a slap pass 35 feet out deflecting off the post going behind a frustrated Markstrom forcing O/T.

While many were expecting a Canuck win Hughes was serving a minor only to have Calgary set up a three-way pass sending one to Gaudreau who wired one past Demko 23 seconds in O/T for the win.

He continued “I didn’t think they were very good tonight. I just didn’t think they were sharp. Passing wasn’t sharp, they were on the outside. When you get an in mini-series like this, teams do make adjustments as the series goes on and their penalty killers do a good job tonight. But I thought our power play could have been better. You’re not always going to score, but sometimes momentum is gained and lost with a power play.”

Vancouver travels to Calgary for a re-match Wednesday then returns home for a four game home stand.

The first pair of games are against Winnipeg February 19th and 21st, then a pair against Edmonton February 23rd and 25th then have time off until March 1st and 2nd in Winnipeg.

It’s interesting to note that Boeser has scored one goal  in his last 11 games, so we’ll see if that continues in Calgary?