With hockey being put in the ‘sin-bin” for who knows how long the NHL have all the necessary steps in place to hit the ice for the 2021-22 season with several changes to what we are used to watching.

The games simply can’t come soon enough for everyone, hockey fan or  not with the winners being the fans.

Locally, the Vancouver Canucks have been hard at work making several changes to what we have seen in the past season all in hopes of putting a winning product on the ice in search of Lord Stanley’s coveted cup.

While everyone is excited for the puck drop the topic came up this past week regarding the Canucks affiliation with Utica Comets for a ‘farm-team” once again.

Years back it was Calgary that located their farm team in Abbotsford after a year in the North Division.

The Abbotsford Heat was moved to the newly renamed West Division, which was formerly the South Division, under an AHL realignment in the summer of 2013.

The Heat opened the season by splitting a pair of games against the Lake Erie Monsters on October 4 and 5, winning the first game after scoring three goals in seven minutes. Hanowski scored twice, and goaltender Reto Berra stopped 31 shots in his North American debut. 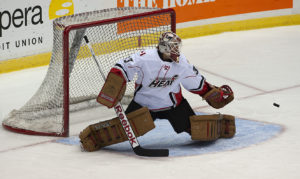 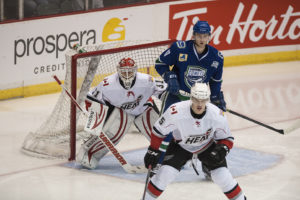 Abbotsford lost the second match-up 3–2 in a game that included four fights and 74 penalty minutes.

The Heat next split a pair of home games against the Milwaukee Admirals, winning their home opener in overtime on October 11th and losing the next day in a shootout where no Abbotsford skaters scored and Berra gave up two of four Milwaukee shots.

From there the Heat hit the road, but their following continued to grow given the fact that it was something new for the hockey fans and the community to be a part of, which they were – especially in the first few years.

Anyone you spoke with often questioned why the Canucks never put their farm team “down the road” which made sense to many in the area.

Former NHL-er Ryan Walter was the GM of the Abbotsford Heat at that time and focused on community involvement to draw fans of all ages to all home games, which worked for a while.

We quite often took my ‘junior” reporter Markus Bollen to the games with me who was a huge help, not only helping to carry the gear but also arranging interviews for me and it was interesting whenever he asked someone for an interview – he was never turned down!!

So whenever I went out to cover a game, it’s interesting to note that this is where we were while others questioned where we were – photo’s don’t lie!! 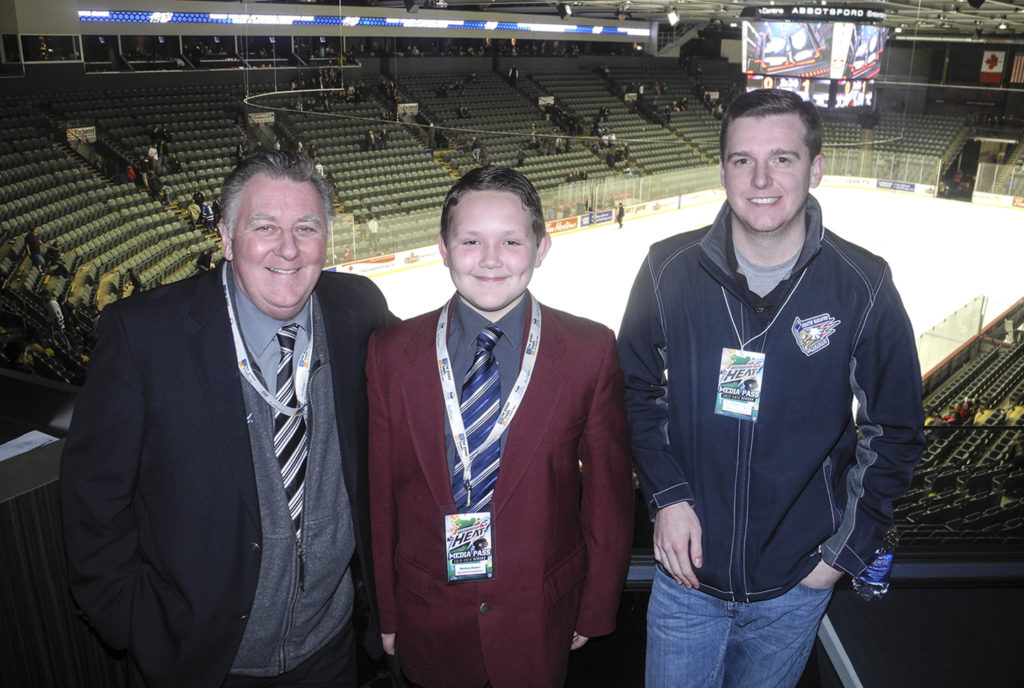 The main concern to the community was that everyone wanted to have a farm team for Vancouver to see the up and coming future stars the team has in hopes of securing a Stanley Cup, which has eluded them since they joined the league.

Try as he (Ryan) might the community simply did not want to embrace the Flames farm-team and in part that was the demise for the relocation of the Heat.

The Canucks for whatever reason don’t feel that having their farm-team in Abbotsford would be favorable to their success, other than bringing players up.

While they still have their farm-team in Utica this coming year they have teamed up with the Blues in which President of Hockey operations/GM Doug Armstrong and Canucks GM Jim Benning made it official by announcing that the Canucks and Blues will share the Utica Comets as an American Hockey League affiliate during the 2020-21 season.

The press release sent out is listed below and all indication is it should be a viable fit for both teams.

The partnership was created after the Blues’ AHL affiliate Springfield Thunderbirds opted out of the 2021 season due to the pandemic. The Canucks and Blues will each be responsible for filling roster spots on the Utica Comets.

Team and business operations for the Utica Comets will continue as in past years, including Robert Esche serving as President, Ryan Johnson as General Manager and Trent Cull as Head Coach.

“We are very pleased to partner with the Blues to find solutions that help both teams during this unique season,” said Jim Benning Vancouver Canucks General Manager. “We have strong leadership and support in Utica and I believe our players and our teams will benefit from this partnership.”

“Due to the unique circumstances, we are pleased to partner with Vancouver and Utica for the upcoming 2020-21 season,” said Blues President of Hockey Operations/General Manager Doug Armstrong. “We trust that our players will be in good hands with the direction and leadership of the Canucks, Comets and especially Robert, Ryan and Trent.”

“Vancouver and Utica have worked together seamlessly over the past eight seasons, and this experience has been no different,” expressed Comets President Robert Esche. “We look forward to the opportunity to work with the St. Louis Blues in the same fashion as our Vancouver Canucks.”

Here’s hoping that the joint venture works for both teams.

The City of Abbotsford has paid the owners of the Abbotsford Heat another $5.5 million to end the Calgary Flames’ farm team’s contract with the city, capping off years of financial losses for the city.

Banman said in total the contract with the team has cost the city more than $12 million since 2010, when then-mayor George Peary signed a ten-year deal with the Heat to guarantee $5.7 million a year in revenue. 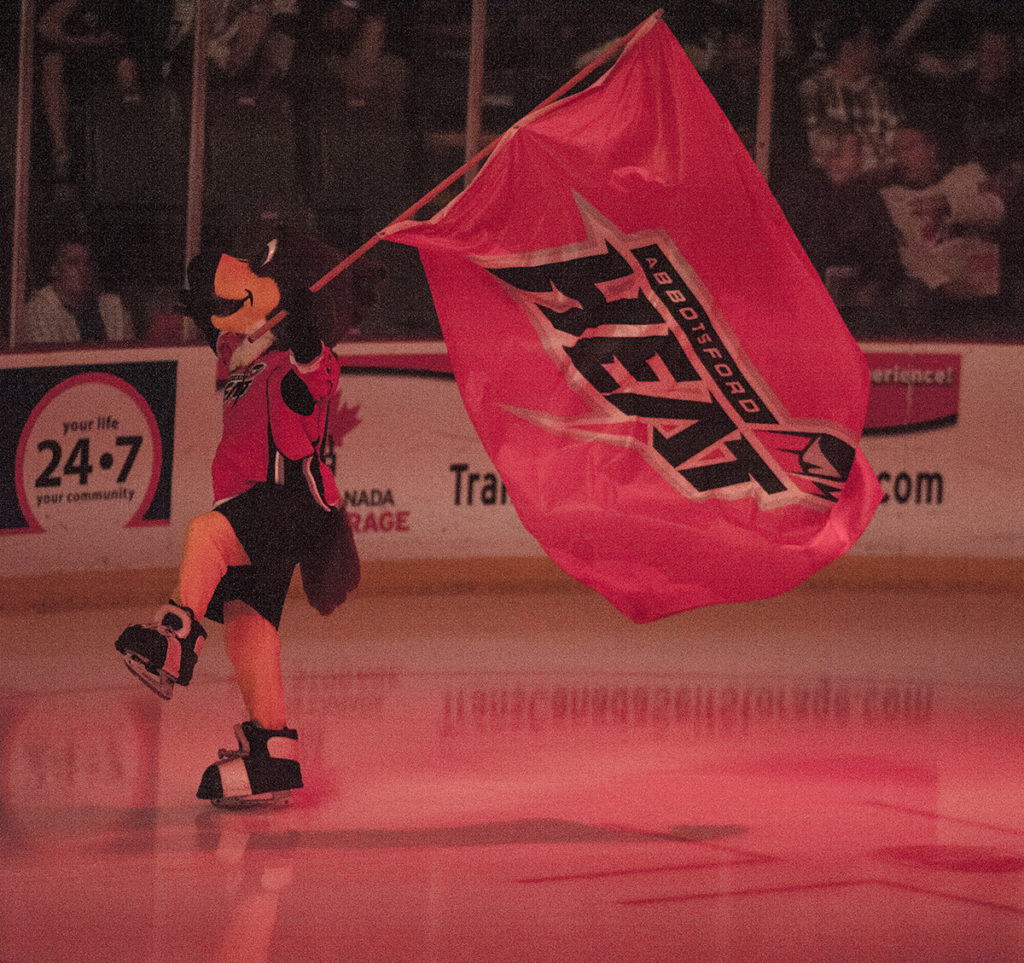