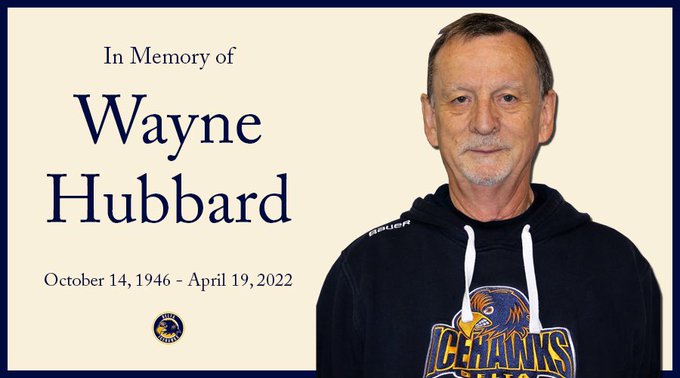 It’s with a heavy heart that I mention the passing of one of the game’s best ever trainers as well as a very personal friend.

I first met Wayne dating back to the late 70ies after I relocated from Winnipeg to Delta when I was officiating Junior hockey in the lower mainland.

Unlike some, Wayne was the kindest person you could ever get to meet and he never had a bad word to say about anyone.

He enjoyed it when I took  my Daughter Annette; or as he and others still call her today “George” to the rink and made sure no one bothered her.

He had a kindness that is hard to explain and disliked those who were overly abusive toward anyone.

He was always there to help the officials before, during and even after the game where we often would sit in the room re-hashing the game and the penalties I assessed.

While he might not have agreed with every call he could see our point of view and how we saw the call to assess the penalty.

One habit I had when officiating is chewing gum, normally juicy fruit and he knew that and whenever I skated near the boards he would hold his hand out that had two sticks of gum passing them to me when I skated by.

One night, I remember rather vividly that I was working with a “rookie” linesman and he would skate back to the boards holding his hand out in hopes of getting gum from Wayne.

It was in the second period and he skated back expecting gum and not getting any he asked Wayne “why don’t you give me any gum, cause you give it to Steve.”

Wayne quickly replied “Look rookie when you have been reffing and in the league for as long as Steve has maybe then I’ll give you some.”

My linesman was devastated and was shocked that a trainer talked to him that way, but all things aside he never asked Wayne for gum any more.

Wayne took care of the officials as though they were his family and often told others that the game consisted of three parts and if you take one away there’s no game.

Wayne’s career saw him work in the BCJHL, PCJHL and his summer hobby was working with the Vancouver Super Series and was an intricate part of the success of its longevity.

Wayne officially retired from working with the Fraser Health’s payroll department at age the young age of 57 and to the surprise of some he never married.

Years back he mentioned to me“I have all the kids I need here every year, but at least they can go home to their parents every night and I don’t have to deal with them, because they can be a handful sometimes,”

He continued “Every year you get a different bunch with a different attitude, different mix, everything. Most of the players are good kids.”

Wayne never wanted to be the centre of attention and as per his request any celebration of life will be held later this summer.