It’s interesting to learn about individuals who dedicate most of their time helping others and it’s even better when  they get recognized.

It’s fair to say that not everyone can get the recognition they deserve but in any community those involved in any sport know who these individuals truly are and what I call the Unsung Hero that helps today’s youth achieve success.

That alone is something that they might not otherwise achieve and it’s not necessarily about being in the right place at the right time, it’s just about not what they do but rather how they go about it.

Many areas often recognize these individuals at banquets held by the associations, but what if your area doesn’t have the funding to promote these exceptional individuals?

It’s not about money or fame but rather about wanting to help today’s youth stay on the straight and narrow without becoming a burden on their families or our society and lord knows it’s easy to do.

Being involved in sports as a volunteer for me personally all I want to do is help grow amateur sports as those playing minor sports today are quite possibly tomorrow’s pro players and yes I have been extremely fortunate to be recognized but never ever expected either one.

Sports are still on hold in most parts of Canada while other areas are allowing players to follow rules set in place, but as quick as it can start up it can be put on hold as we are seeing in Nova Scotia regarding their Junior hockey.

Recently the following notice came across my desk from the Western Hockey League regarding the recent announcement for the Bob Ridley Award for Media Excellence.

This is something that has been being discussed for a while and now comes to life and this new WHL Award will be presented annually to a distinguished member of the radio, television, and print journalism industry in recognition of their outstanding contributions to sports journalism and the WHL.

The WHL press release is below in full and I appreciate them sending this as I have met many great individuals who want only to promote the game they are passionate about. 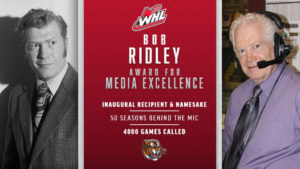 Bob Ridley, the longtime radio play-by-play voice of the Medicine Hat Tigers, is the first recipient and the namesake for this prestigious honour.

Bob Ridley was recognized by WHL Commissioner Ron Robison and the Medicine Hat Tigers during a special ceremony at Co-op Place in Medicine Hat on Saturday, the day of Ridley’s 4,000th career WHL game.

“The WHL and our member Clubs are honored to pay tribute to Bob’s remarkable career with the Medicine Hat Tigers by establishing the Bob Ridley Award for Media Excellence,” commented WHL Commissioner Ron Robison. “Bob has made an incredible contribution to the WHL and the Tigers over the past 50 years and as he gets ready to call his 4,000th WHL game it is only fitting we recognize his legacy with this new league-wide award named in his honour.”

Since the Tigers began play during the 1970-71 WHL Regular Season, Ridley has been the only play-by-play voice in team history, calling every single game the Tigers have ever played, with the exception of one.

In 1972, Ridley missed one Tigers game after he was sent out on assignment to attend the Women’s National Curling Championship in Saskatoon, Sask.

Ridley has been synonymous with Medicine Hat Tigers hockey for 50 seasons, with the 2020-21 WHL Regular Season representing his 51st campaign at the mic.

In addition to his work as the Tigers play-by-play voice, Ridley also served as the Club’s bus driver for 45 seasons.

Ridley’s contributions to Major Junior hockey in Western Canada have been recognized on a number of previous occasions:

In 1995, he was the recipient of the Medicine Hat Civic Recognition Sports Award.

In 2005, Ridley was named the recipient of the Alberta Sports Hall of Fame Bell Memorial Award, and he was also presented with the Alberta Centennial Award by the Government of Alberta.

In 2006, Ridley was recognized with the WHL Distinguished Service Award.

From there, he moved on to CKSW Swift Current, working as a rock disc jockey and calling play-by-play for an intermediate baseball team in Swift Current, Sask.

Ridley then spent two years at CKKR Rosetown before joining CHAT Radio and settling in Medicine Hat since day one and the team bus driver for 42 years.

The WHL consists of 22 member Clubs with 17 located in Western Canada and five in the U.S. Pacific Northwest. 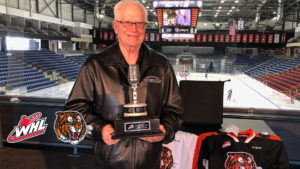 A member of the Canadian Hockey League, the WHL has been a leading supplier of talent for the National Hockey League for over 50 years.

The WHL is also the leading provider of hockey scholarships with over 375 graduates each year receiving WHL Scholarships to pursue a post-secondary education of their choice.