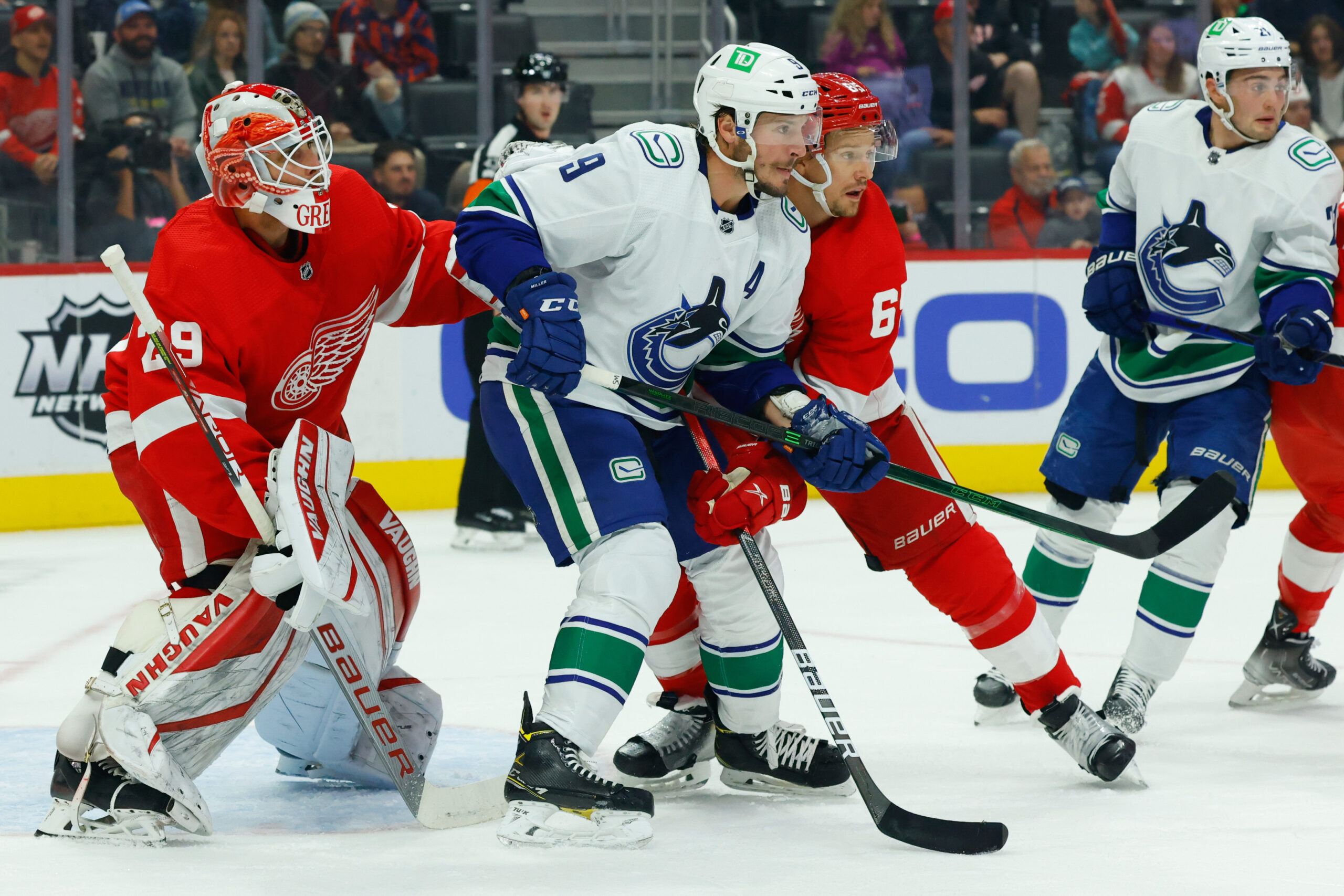 Tonight’s match-up featured the once powerhouse Detroit Red Wings who were on a six game losing streak in hopes of getting back into the “W” column.

If you were young like me, years back growing up in Ontario you either cheered for the two of the original NHL six, one being Toronto and the other being the  Red Wings.

Back then was the hay-day for the original six and having the luxury to watch super stars of decades gone by, for me personally it was easy to cheer for my favorite Red Wing’s player, Norm Ullman.

Ironic as it sounds he wore the same number as I did, or is it vice versa, but regardless of playing wing at times on “D” they were the team I enjoyed watching in a bygone era.

Ullman grew up in Provost Alberta and played 20 seasons in the league playing 1,410 games of a possible 1,458 regular season games.for both the Wings and  the Leafs.

He also scored 30 goals and finished with 83 points in 106 Stanley Cup Playoff games.

Looking back it’s important to know that he played center early in his career featuring future Hall of Famers Gordie Howe and Ted Lindsay and also centered Gordie Howe and Alex Delvecchio during the 1960s.

In a game April 11th, 1965 he scored two goals in five seconds against Hall of Fame goalie Glenn Hall of the Chicago Blackhawks in Game 5 of the Semifinals

Fast forward to the game at hand the press box is full with lots of scouts all getting a last minute possible players who could be on the move come the trade deadline Monday March 21st.

Naturally there are skeptics who are contemplating Canuck trades, some of which  make sense while others make no sense at all, well at least not to me.

For the second consecutive from a local perspective it’s great to see North Delta’s Nic Petan in the line-up along with the return of former Penticton Vee and Richmond BC’s Troy Stecher.

While many of late have questioned the work ethic of the Canucks, no one should question that from the highlights in the first two periods.

Both teams continued to pepper shots at the opposition tender that saw Demko face 31 shots through two allowing one, while his counterpart 190 feet away Greiss pulled a rabbit out of his trapper stopping 29.

It’s fair to mention that bench boss Bruce Boudreau wouldn’t have much to say, other than stay the course and continue to drive the net and challenge for any rebound.

While both teams played exceptional, the ones who literally stole the show was Demko who was forced to make several close in saves.

The Canucks best chance was on the PP mid-way through the third that saw Miller and Hughes on “D” while Boeser, Horvat and Garland were up front getting rebounds or hoping to get any rebound.

While we expect minor hockey players or even junior players to miss the net from various areas of the ice, one questions why pro players shoot from 30 or more feet out. Ron’s track record is anything worth a try.

Given the manner in hush technology has changed over the course of the past few years one  has to think that quite possibly the Canucks should look at contacting Delta’s Ron Johnson utilizing the Elite Hockey shooters.

At this level of the game, money is spent in various areas and given the fact that the Canucks have made huge strides since Bruce arrived, I’m sure it would be a welcome addition to the PP unit for one.

While the Canucks came up short dropping the contest by a 1-0 score no one can go home saying they weren’t entertained.

The Canucks hit the ice for practice Friday and return to the ice for a pair of games Saturday against the Flames followed by a game the following night against the Sabres before hitting the road.

Vancouver remains on a home stand with two games against Calgary on Saturday followed by a short turnaround against the Sabres Sunday at 7 pm at Rogers Arena.

With the trade deadline upcoming, there’s no question that there is added pressure on various players.

We’ll see what moves the Canucks make come the first of the week.