Family Fun Sunday At The Nat 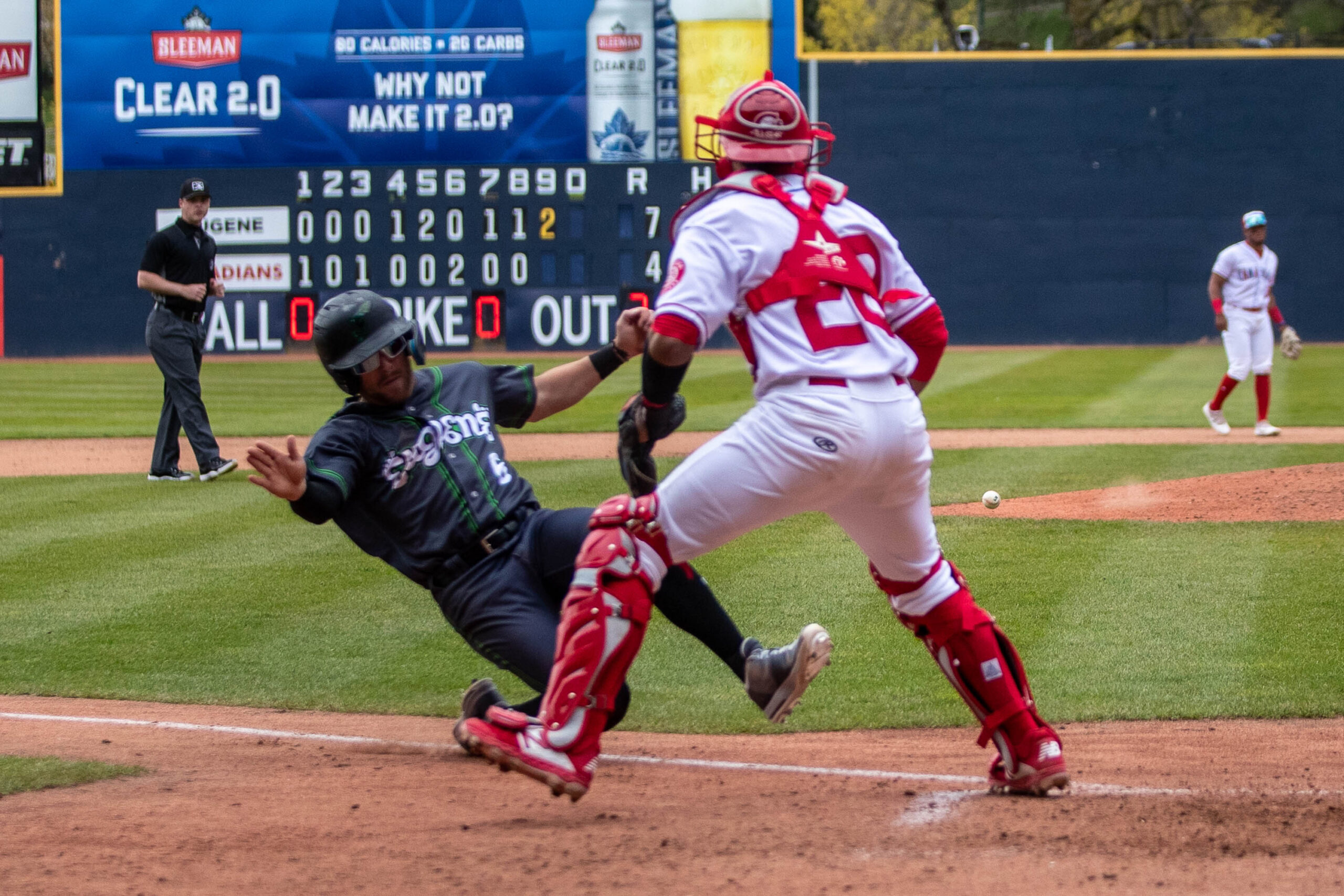 Attending games at the Nat isn’t just a day out it’s an experience that you soon won’t forget regardless of your age.

Sunday was the day for the kids to run the bases following the game and while you might think that very few show up, simply put the bases were loaded with none out.

The following is the game report from Canadians broadcaster Tyler Zickle who is enjoying his time north of the 49th and was eager to get the season off the ground.

Leading 4-3 to start the seventh, the C’s surrendered single runs in the seventh and eighth before the Emeralds scored three in the ninth to put the game away.

Vancouver started the scoring with a run in the bottom of the first. Addison Barger singled with two outs, went to second on a walk and scored on a wild pitch and a throwing error by the catcher that put the C’s in front 1-0.

Barger added another single to his line in the third when he singled home Garrett Spain, who walked, stole second then came around on Barger’s base knock to double the Vancouver advantage.

Eugene rallied for a run in the fourth on #7 Giants prospect Patrick Bailey’s second homer of the year then scored two runs with two outs in the fifth – one of which was unearned – to jump in front 3-2.

Andres Sosa clubbed his first home run of the season in the sixth to help the Canadians grab the lead back. Harry Ray doubled with one out in the inning before Sosa’s blast two batters later.

The Emeralds started their comeback on the second pitch of the seventh thanks to a Marco Luciano solo homer and were off and running from there to hand the Canadians their first series loss of the season.

Barger paced the offense with his second three-hit day of the season. Sosa and Ray provided the only C’s extra base hits on the day.

After an off-day Monday, the C’s travel to Hillsboro for their series with the Hops (Diamondbacks) that begins Tuesday night at Ron Tonkin Field. #7 Blue Jays prospect Sem Robberse gets the ball for Vancouver.

Radio coverage begins at 6:30 p.m. and continues with first pitch at 6:35 p.m. on CanadiansBaseball.com.

When you’re facing the league leader in home runs, you’re bound to get bit by the long ball.

That happened to the Vancouver Canadians on Saturday at Nat Bailey Stadium when the Eugene Emeralds (Giants) smashed three home runs and seven total extra base hits to hand the C’s a 7-3 loss.

Eugene used a solo homer to start the scoring for the fourth consecutive game. This time, back-to-back jacks to begin the third inning broke a scoreless tie and made it 2-0.

They scored two more in the fourth – though one was unearned – to lead 4-0 before the Canadians could muster their first hit.

Miguel Hiraldo got the C’s in the hit and run columns with a two-out RBI single in the bottom of the fourth that was set up by an error and a walk. He added a double in the sixth to finish with two hits, one of two Canadians with multiple knocks today.

The Emeralds padded their lead in the fifth by scoring a run on three walks and a fielder’s choice, but Vancouver pulled within two by scoring a pair of runs in the bottom of that inning. Trevor Schwecke and Garrett Spain started the frame with singles before a fielder’s choice plus a throwing error on what would have been a double play allowed Schwecke to score from second.

PK Morris came to the dish two batters later and singled up the middle to score the second run of the inning and make it 5-3 Eugene.

That would be the closest the C’s got. Single runs for Eugene in the sixth and eighth put the game out of reach, and the Emeralds evened the series at two games apiece with a 7-3 win.