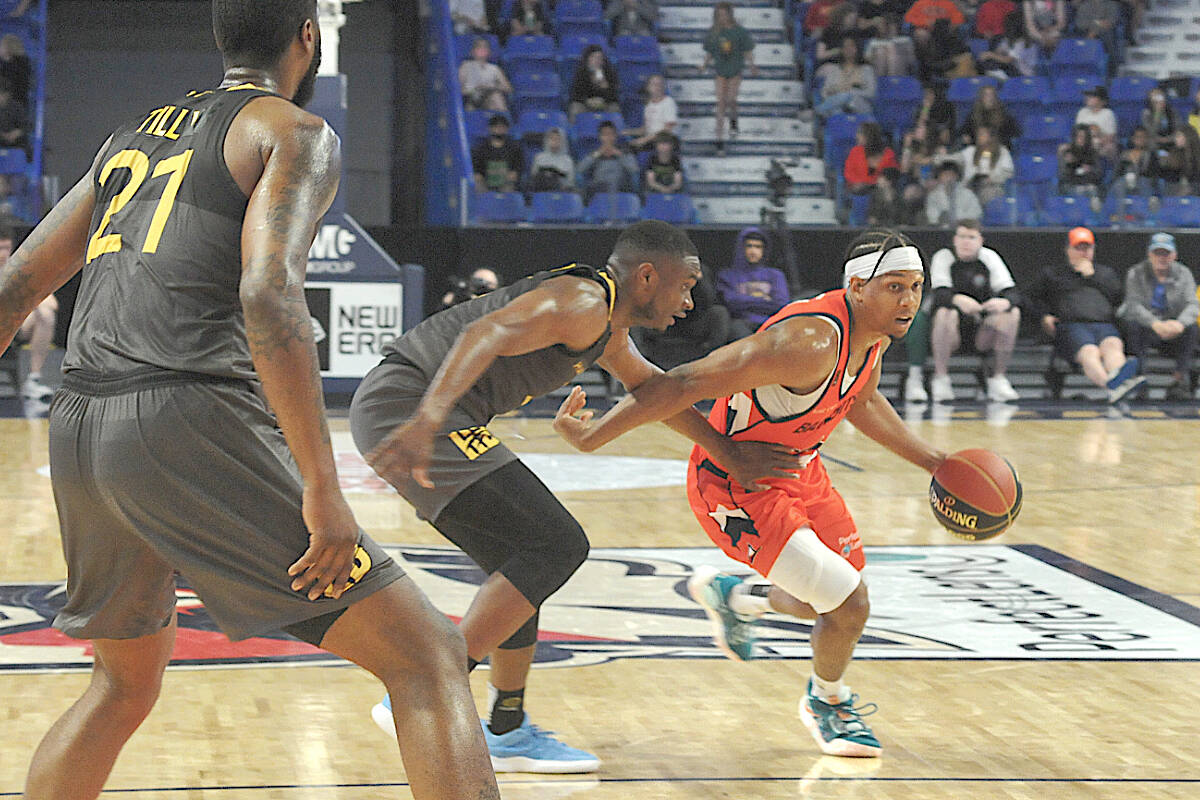 Locally the relocated Fraser Valley Bandits are beginning to attract record numbers through the turnstiles playing out of the Langley Events Centre.

It should be noted that it clearly wasn’t the three-point shot that carried the Bandits but rather the 13 schools that they hosted which was part of the School Day Game they hosted for the very first time.

Let’s be clear this isn’t the first ever school day game in the area, but rather the second with the first being hosted by the AHL Abbotsford Heat February 5th, 2013 when they played host to the Rochester Americans.

It was however the first hosted by any of its 10 teams in the Canadian Elite Basketball League noting that the game was sold-out with schools attending from Abbotsford, Mission, Surrey and Township of Langley.

As well as an entertaining game adding to the enjoyment for the students saw the Bandits place a complimentary co-branded drawstring bag on the seats which was supplied by Sentinel Storage.

The first part of the game was scoreless until the 33:13 mark that saw the Bandits sink 14 of 31 attempts shooting 45.2 % while Murphy Burnatowski sank five triples, while Alex Campbell and Shane Gibson each hit four.

Burnatowski opened with his sixth three-pointer, pulling them within one (68-69), but they missed their four shots, three from beyond the arc that saw Hamilton score the final 11 pulling out a 80-68 win.

Bandits’ Coach Mike Taylor told the media “As the game went on, you could see the physicality from Hamilton become a factor. At the end of it, they did a great job defensively, making us work for scores and we got out-played in Elam Ending, but you really have to give a lot of credit to the way Hamilton played today.”

The Bandits took a 9-0 lead going up 17-8 midway through in the first quarter  then Hamilton exploded cutting the deficit to 21-20 after one quarter.

The Bandits hit 41.7 % from beyond the arc and attempted only 23 shots from inside the arc going to the foul line five times.

Taylor mentioned “We did not attack and pressure the rim enough; we did not get enough paint touches to really pressure their defence and create those easy shots and our guys did a fantastic job hitting some of those tough shots.”

He continued “Again our offence, we want to pressure the rim a little bit more, get that ball into the paint a little bit more, create more advantages, whether it is out of pick and rolls or drives, penetration or paint touches.”

Hamilton outscored the Bandits 32-16 in the paint, and also rebounding (46-30) which included 16 offensive rebounds.

Gibson led the Bandits with 22 points, Burnatowski had 18 while Campbell had 12, while Hamilton Caleb Agada managed 17 points that saw Christian Vital score seven of his 13 points.

For the game, Hamilton forced 18 turnovers, converting those takeaways into 26 points.

Hamilton coach Ryan Schmidt mentioned “Our defensive effort was amazing. We talk about that is where our identity is going to be at and proud of the effort we got.”“

He continued “Defensively, that is where we are going to win games. We have a very versatile group, multiple guys that can get up and pressure the ball.

“It is a very team-oriented defence, we are not relying on just one guy to stop them. Again, getting in the passing lanes, forcing them to make tough decisions, resulted in forcing 18 turnovers.”

Hamilton sits in first place at 4-1 while the Bandits drop to a three-way tie for third place at 3-2.

Bandits Kadre Gray managed only two points not coming close to his season average of 10.3 and mentioned “We are just building trust every game … it comes the more you play,” “Situations like this where you have a bad loss, you have to figure out how to reunite and come together. I have all the faith in the guys that we are going to figure it out. It is about being ready for playoff time.”

The game was a special early start as students from Langley, Surrey, Abbotsford and Mission were in attendance, adding a raucous atmosphere to the contest.

The Bandits hit the hardwood in Alberta playing the Edmonton Stingers, June 15th then return home to face the Scarborough Shooting Stars as part of the BC Basketball Festival continues.