The Express hit the ice for the second game in as  many day’s playing under new bench boss Adam Nugent-Hopkins who wants to have the team more accountable.

As one might expect listening to the broadcast it’s no real surprise that the officials were not introduced at game start, but needless to say this is one of my pet peeves.

The Express started Kruss again who is coming off last night’s 5-1 loss while the Kings start West Vancouver’s Thomas Wardle who looks to have another impressive season.

The first season was impressive with one main issue that being the internet audio feed from the Scotia Barn which has slow internet at the best of times, so we are urged to be patient.

The first part of the period saw the Kings run into penalty trouble being assessed three in the first 11:10 while the Express were assessed their first penalty at 12:46 which proved costly.

The Kings capitalized on the PP at 12:46 that saw Ben Brunette get his first of the early season that allowed them to take the 1-0 lead to the dressing room after the first.

As one might expect the players are still sorting out the new rules that saw the Kings sit in the  box four times while the Express were assessed two, all of which were minors.

Shots after one were listed as 1-0 for the Kings while in reality they were 11-7 for Powell River who continued to pepper shot after shot on the Eagles net.

It’s interesting to hear that the Kings ran into problems that were due to the slippery ice conditions but isn’t that the same for both teams playing?

It was Krogfoss who put the Kings up 2-0 early in the second at 1:26 on the PP while Eagles Fraser was serving a Tripping minor which proved costly.

Express player Oakley was assessed a minor at 3:22 for Charging and not Interference as announced by the Kings broadcaster giving the Kings yet another PP chance.

Express got the first of the game at 13:00 off the stick of Will Dow-Kenny who is apparently ‘on-loan” from the Langley Rivermen which no one seems to know how this happened, but we’ll do our best to sort it out.

The Express continued to press and got their second of the game at 11:17 which was waved-off due to the net being knocked off its moorings or pegs.

The Kings pressed and took a 3-1 lead at 10:32 Josh Kagen getting his first of the season after a controversial wave-off by the officials that seemed to be more of a motivation move for the Express.

The Express continued to press that saw Ryan Tattle get his first of the “Pod-Season” pulling them within one at 10:18 with the lone assist going to Austin Fraser.

It’s fair to mention that all the pressure is on the Express considering all games are being played in their backyard and it wasn’t long until they tied the game at three at 14:46 with MacDougal getting his first of the season

As if tying the game wasn’t enough it was Dante Berrettoni who gave the Express the lead for the first time in the game at 16:48 with the pressure clearly on the Kings.

The second saw six goals, four going to the Express and a pair to the Kings as the second drew to an end with the Express leading 4-2 through 40 minutes with shots favoring the Express 15-12 and 25-22 for PR after two.

Being down is nothing new for the Kings that saw them come out more aggressive getting an early jump off a face-off in the left corner that saw Josh Kagan get his second of the game 21 seconds in.

As one might expect, tempers became heated as Express Tyler Schleppe was assessed a minor for Unsportsmanlike Conduct at 2:06 while Kings Ben Brunette took a Slashing minor at 2:57 with both clubs trading PP chances.

Santia gave the Kings a 5-4 lead with the teams playing four on four at 3:11 which was short-lived only to have Tattle get his second of the game tying the game at five on the PP.

Both teams had chance after chance and it wasn’t until an icing was waved off that saw Kings Krogfoss jump on the loose puck sliding it to Kagan who got his third of the game giving the Kings the 6-5 lead.

Try as they might the Kings were unable to rebound dropping the first game but hit the ice in less than 24 hours against the Surrey Eagles with the face-off set for 1 pm.

The third saw the Express outshoot the Kings by a 13-9 in the third for a three period total of 35-29. 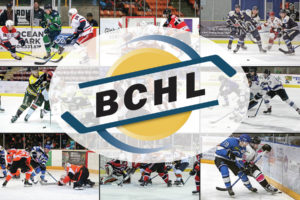 The Pod features 20 games with no playoffs to speak of which is different for the league not to  In mention the teams as well as all players, but they’ll adapt.