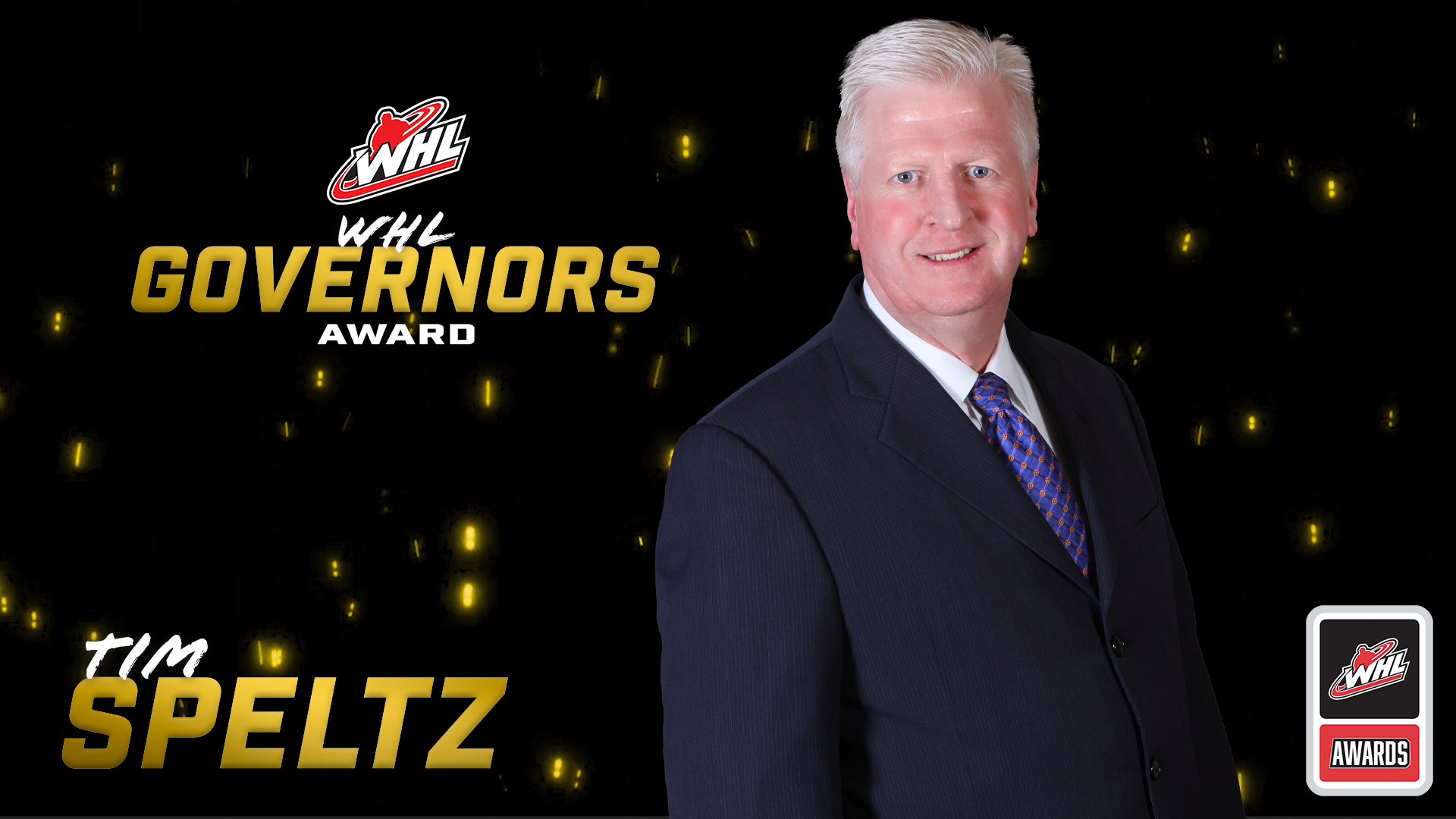 From day to day we receive several e-mails that let us know about their sport as well as various individuals, teams or organizations, all of which are appreciated.

We wish to pass on our congratulations to Tim Speltz on being named as the WHL Governor Award.

Enjoy the read and thanks to the WHL for the press release!!

The Western Hockey League announced today, on behalf of the WHL Board of Governors, that Tim Speltz, former General Manager and Governor of the Spokane Chiefs, has been named this year’s recipient of the WHL Governors Award.

The WHL Governors Award is the highest honour the WHL bestows on an individual who has been associated with the League.

The WHL Governors Award is presented annually to an individual who, through their outstanding hockey and overall contributions to the game, has impacted on the growth and development of the WHL.

“I am extremely proud to receive this special recognition from the Western Hockey League,” Speltz said. “It is very humbling to be included on this distinguished list with the previous recipients and it is difficult to put into words what this award means to me. I have always considered it a privilege and an honour to be involved in such a great League.

“I would like to thank my wife Lynn and my daughters Jenna and Hannah for their unwavering support of me and my hockey career.

Thank you to the Governors and leaders of the WHL for the nomination and this recognition.

Thank you to all of the Spokane Chiefs staff members over the years, especially two longtime co-workers Brenda Nelson and Mark Miles.

“Finally, thank you to Bobby Brett and the Brett family for the opportunity and guidance over my 26 years in Spokane. I will always cherish my time with the Chiefs organization and the Western Hockey League.”

Following 26 seasons as the General Manager of the Spokane Chiefs, Speltz advanced to the National Hockey League, joining the Toronto Maple Leafs as the Club’s Director of Western Area Scouting beginning with the 2016-17 season.

In 2018-19, Speltz was promoted and served as the Maple Leaf’s Head of Amateur Scouting for three seasons before being named General Manager of the AHL’s Henderson Silver Knights on August 31, 2021.

“Tim has become one of the most respected individuals in all of hockey,” said Bobby Brett, Owner and Managing Partner of the Chiefs. “His leadership has helped numerous coaches, players, and staff become better at their positions, whether that is in the game or personal lives.

He helped take the Chiefs to a new level and turned the franchise into one of the top teams and businesses in the CHL.

The WHL is better for having Tim involved and he has helped the WHL become the top junior league in the world. I’m proud to call Tim a friend and partner with the Chiefs, and no one deserves this award more than Tim Speltz.”

The Chiefs experienced great success with Speltz at the helm as the Club’s architect, including two WHL Championships (1991, 2008) and two Memorial Cup titles (1991, 2008).

On two occasions, he was recognized with the Lloyd Saunders Memorial Trophy, presented annually to the WHL Executive of the Year (1995-96, 1999-00).

The Chiefs won 961 regular season games under the direction of Speltz, adding another 142 playoff victories as they qualified for the WHL Playoffs in 23 of 26 of his seasons leading the Club.

“Tim Speltz was one of the most respected General Managers in WHL history,” commented WHL Commissioner Ron Robison. “Tim was instrumental in building the Spokane Chiefs into a model WHL franchise while being a major contributor on many of the WHL’s key hockey committees.

On behalf of the WHL Board of Governors and all of your colleagues and friends around the League, congratulations on being a most deserving recipient of this prestigious honour.”

With great success on the ice came great success in developing players for advancement to the NHL. During Speltz’s time as General Manager in Spokane, a total of 63 Chiefs had their name called in the NHL Draft, five of whom were selected during the first round.

Arguably two of the greatest players to emerge from the Speltz era in Spokane were forward Tyler Johnson and defenceman Jared Spurgeon.

From 2007-08 through 2010-11, Johnson registered 282 points (128G-154A) in 266 career WHL regular season games, and was named WHL Playoffs MVP as a member of the Chiefs 2008 WHL Championship and Memorial Cup-winning team. Johnson, a native Spokane, was passed over in the NHL Draft before being signed to an entry-level contract by the Tampa Bay Lightning on March 7, 2011.

Since making his NHL debut in 2013, Johnson has skated in 615 career NHL regular season games over 10 seasons with the Lightning and Chicago Blackhawks. He helped the Lightning to back-to-back Stanley Cup championships in 2020 and 2021.

Spurgeon was selected by the New York Islanders in the sixth round (156th overall) of the 2008 NHL Draft, but went unsigned by the club.

In September 2010, the two-way defenceman turned an amateur tryout agreement with the Minnesota Wild into an entry-level contract. Since making his NHL debut on November 29, 2010,

Spurgeon has appeared in 772 career NHL regular season games. Most recently, he was named captain of the Wild on January 3, 2021.

Prior to his 26-year run with the Chiefs, Speltz served for two years as General Manager of the Medicine Hat Tigers (1988-90).

Recipients of the WHL Governors Award: