Montreal played their best game of this year’s Stanley Cup championship series but fell short of getting a series split heading home for games three and four.

The hard fought battle wasn’t enough against the defending champs giving them a 3-1 win in game two managing to take a 2-0 series lead.

The Canadiens outshot Tampa forcing goalie Andrie Vasilevskiy to come up with some remarkable saves, which he did as he turned aside 42 of 43 shots through sixty minutes.

The opening period was scoreless with Montreal’s Carey Price facing only six shots while Tampa’s Andrie Vasilevskiy was forced to make 13 through the first twenty minutes.

The Lightning opened the scoring at 6:40 with Anthony Cirelli (5th) of the playoffs sending a shot through traffic that somehow found its way under the blocker of Price with helpers going to Johnson and Rutta.

The Canadien’s responded as London Ontario’s Nick Suzucki got his 6th of the postseason four minutes later sending one through the Lightning “D” who screened Vasilevskiy tying the game at one.

Montreal carried the play against the Lightning as Vasilevskiy faced 16 shots coming up huge to deny Montreal any chance of taking the lead but a late turnover at the Montreal at the blueline allowed Goodrow to intercept an errant pass.

The transition play saw the game change in the dying second as the Habs defense sent Ryan McDonagh in with a streaking Blake Coleman stride by stride.

Using his size (5’11”) to his advantage as well as the length of his stick he (Coleman) made a desperation dive while on his stomach and managed to get it over a sprawling Carey Price with no time left on the clock. 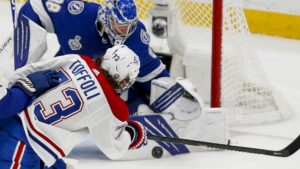 As one would expect the play was under video review and after a short delay it was determined that there was .02 seconds left on the clock giving the Lightning a 2-1 lead after forty minutes.

The Habs carried the play pressing Andrie Vasilevskiy who was forced to come up huge saves as they pressed for the equalizer but denied all chances.

Vasilevskiy faced 14 shots managing to preserve the Lightning lead while some 200 feet Canadiens Carey Price faced 10 of the 23 by Tampa.

A fluke chance saw Ondrjey Palat beat Montreal’s D-man to the puck deep in their zone almost parallel with the goal-line firing a desperation shot on Price who was protecting the post that somehow bounced in off his skate and into the net.

Tampa’s late goal at 4:48 of the third gave them a 3-1 lead on the scoreboard which proved to solidify the win heading to Montreal for games three and four.

Montreal continued to press the Lightning “D” getting several solid scoring chances only who again were turned aside by Andrie Vasilevskiy who denied them of getting back into the game and the series.

Tampa now takes a 2-0 series lead to Montreal playing at the Bell Centre that will only be permitted their standard 3,500 fans in attendance, somewhat short of the 10,000 they were hoping for.

It is interesting to note that Canadiens Head Coach Dominique Ducharme will return to behind the bench for game three which could be possibly more of a motivation for the Canadiens.

Acting coach Luke Richardson has done a good job running the bench but Montreal should benefit from having Ducharme on hand to implement his system.

Montreal managed to score only one goal in each of the first two games and made life difficult for goaltender Carey Price with poor puck management.

Five of the eight Tampa Bay goals were scored after the Canadiens turned the puck over and four of those turnovers were in the neutral or offensive zone.

Tampa Bay goaltender Andrei Vasilevskiy finished second to Marc-André Fleury in the Vézina Trophy voting, which might have been based more on sentiment than ability.

If the Lightning repeats as the Stanley Cup champion, Vasilievskiy should be the easy choice for the Conn Smythe Trophy as the most valuable player in the playoffs.

Vasilevskiy was the difference in Game 2 making 42 saves and allowed fewer than two goals in 10 games with a GAA of 1.89 along with his playoff-best SV% of .939.

Nick Suzuki and rookie Cole Caufield had a bounce-back game after nerves got the better of them in Game 1.

Suzuki had nine shots on goal and scored the only Montreal goal on a power-play shot from the blue line that rolled between Vasilevskiy’s pads.

With concerns about the kids in Game 1, the Canadiens have to figure a way to score the first goal, one of the keys in their first three series, while also needing some offence from their veteran leaders.

While Phillip Danault’s line is tasked with shutting down Tampa Bay’s top lines, it was has to be able to generate more than two shots on goal.

The international flavour of the game — a Canadian team versus an American team — had Canadian Prime Minister Justin Trudeau and U.S. President Joe Biden agreeing to a friendly wager on Twitter.