Due to cross-border travel restrictions imposed by the Government of Canada, the league temporarily realigned this season into four divisions with no conferences.

Subsequently; the first two rounds of the playoffs featured Intra-Divisional match-ups, with the higher seeded teams receiving home-ice advantage in those rounds.

Initially, it was unknown if Canadian teams that qualified for the playoffs would be permitted to play in their home arenas after the second round.

It was made official June 6th that those teams would be allowed to play in their home arenas for the remainder of the playoffs.

In order to complete the playoffs in Canada, the League directly applied for a cross-border travel exemption with the Public Health Agency of Canada.

Prior to the announcement being made official there were some ideas of the Canadian team playing in a neutral NHL city in the US after the second round.

The final series dwindled down to two teams for the right to play for the coveted Stanley’s Cup, that saw Tampa come off a hard fought seven game series over the Islanders while Montreal battled Vegas winning in six games.

With Tampa being the home team; the first two games will be played at the Amalie Arena before switching to Montreal’s Bell Centre.

The Lightning are looking to be the first team to win back to back titles since the Pittsburgh Penguins pulled off the feat in 2015-16 as well as the/2016-17 season.

The Canadiens are making their 25th appearance in the Stanley Cup final championship final which ranks them second to the New York Yankees of the four major sports in North America.

It’s been a magical run for Les Canadiens which one might liken to the run in 1993 some 28 years ago when they defeated Wayne Gretzky and the Los Angeles Kings in five games that saw them win their 24th title.

This year the journey for the Habs has been one of the most difficult seasons in the history of sports’ battling the Pandemic which saw the NHL play a reduced 56 game schedule and no fans allowed in any arena’s.

The opening round of the postseason saw them coming back from being down 3-1 in the series then going on to win the remaining three games and take the seven game series 4-3.

The second round of the semifinals saw them pull off what some say stunned the hockey world by sweeping the Winnipeg Jets (63 points) by sweeping them in straight games capturing the NHL’s North Title.

The win advanced Montreal to the third round and conference championship against the highly powered Vegas Knights (82 points) who had home-ice for the series.

Montreal dropped the first game of the series 4-1 to the delight of the Vegas supporters but rolled the dice managing to win the next five with Artturi Lehkonen scoring the O/T winner sending Montreal to Stanley Cup Final. 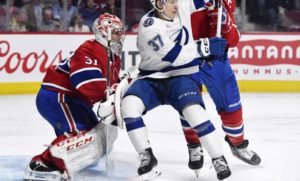 Tampa Bay Lightning won the Cup for the second time in franchise history and saw them play “in the bubble” last year in Edmonton managing to defeat the Stars more than two months after they entered the N.H.L. bubble in Toronto.

Lightning D-man Victor Hedman won the Conn Smythe Trophy as the MVP of the playoffs leading all D-men in the postseason with 10 goals.

The 2020-21 season saw the Lightning finish third in the Discover Central Division that saw an all Florida series taking on the Florida Panthers in the opening round winning the series in 6 games.

Next up in the second round saw them face the President Cup Champions, Colorado Avalanche (82 points) with 35 wins while Vegas Golden Knights had 30 wins in the regular season.

Tampa played Carolina in the third round in a hard fought series winning the series in 6 games (4-2) advancing to the Eastern Conference finals.

The Conference final saw the Lightning play the Islanders whom they had met in the previous year (2019-20) winning in a hard fought 6 games (4-2) series in a best of seven.

Fast forward to the 2020-21 season these rivals met again which was a tougher road for Tampa winning game 7 taking the series 4-3.

They now face the historic challenge of taking on the 24 time Stanley Cup Champions Montreal Canadians in what should be a tremendous final series.

The best of seven series begins in Tampa that should see over 18,000 rampant Lightning fans  set to  cheer on their home team.