The season of glory for the Oilers who finished with a record of 35-19-2 managing 72 points in 2nd place saw the Jets finish sporting a record of 30-23-3 with 63 points sitting third in North division. 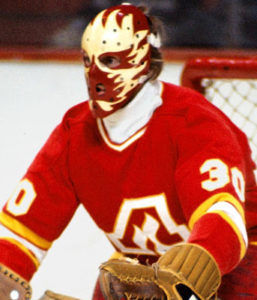 Both teams had never faced each other in the history of the NHL and this is the first time in their history since the Flames moved from Atlanta in 1980 when they were known as the Atlanta Flames and former London Knight Dan Bouchard was their tender.

The Atlanta Flames were founded in 1972 and upon arriving in Calgary saw them play their first three seasons at the Stampede Corral then moving to Scotiabank Saddledome, which was originally known as the Olympic Saddledome.

The history of the Jets dates back to 1972 in the WHA when 54-year old owner Ben Hatskins signed Blackhawks superstar Bobby Hull who received a check from the WHA in St. Paul for $1‐million as a signing bonus..

The signing in Winnipeg was made official at the corner of Portage and Main (June 27th, 1972) for almost $2.8 million over 10 years that saw him receive $1 million up front, making him the first player to sign a million-dollar contract.

Canada’s season in the Scotia North Division was unique and like no other especially for the Canucks who were hit with COVID-19 that forced a stoppage of play which forced them to play a condensed schedule.

The 2021 NHL season was the most unique, yet strange campaign that any of us will remember going down in history having no fans in the building due to the numbers on the rise in all Canadian Provinces as well as the US-Canada border being closed,

The top four teams squared off facing each other in a best of seven and it’s fair to say that we have been entertained with some exciting hockey making all else sort of mundane.

One could say that this series was posthumously named the “Battle of the Two Connors” which was named after both Connor McDavid and Hellebuyck who played exceptional in the four games that he faced the Oilers.

Its fair to say both teams were much closer than it seemed, having many one-goal games which saw game one that was mainly a 2-1 game with two empty-netters, while game two saw Paul Stastny grab the O/T winner.

Game three saw Oilers Draisaitl and McDavid take a 2-0 lead over the Jets before allowing the Jets to pull within one in the second, but as we know a lead in sports can be short lived where it took the Oilers a minute and four seconds to restore their two-goal lead.

The Oilers made it 4-1 looking like a convincing win but the Jets turned on the afterburners scoring three and in a span of just over three minutes clawing their way back which was like watching Nightmare on Elm Street.

Talk about a momentum shift that not only shocked the team but everyone watching forcing O/T in what best described as a third-period surge going from 4-2 to 4-4 in a shocking span of 16-seconds which had me reflecting back to 2017 when the Oilers dropped three straight goals against the Ducks before losing in OT,

Game four saw both teams play a seesaw battle with Mark Scheifele putting the Jets up at 6:16 followed by an even-up goal by McDavid at 7:33 proving to be a motivation marker for the Oilers.

The lead was short lived that saw Mark Appleton give the Jets a 2-1 lead at 15:55  heading to the dressing room after 20 while the Jets managed 12 shots to the Oilers 5 while the Oilers took three undisciplined consecutive minors.

Burnaby’s Ryan Nugent-Hopkins got the Oilers even on the board at 3:44 with Larsson and Kassian did the dirty work heading up ice, which proved to be short lived.

The end to end battle continued with both teams getting several chances only to be turned aside by both tenders who were forced to make some impressive game saving stops.

The Jets turned the puck over in the neutral zone allowing Oilers forward Alex Chiasson to put them up 3-2 at 16:55 allowing them to take the one goal lead to the dressing room after 40 minutes.

With the game on the line the second saw a reversal in the shot department as the Oilers out-shot the Jets 12-6 with the shots being 18-17 after two for the Jets.

Entering the third the Jets were looking at finishing the series off while the Oilers were in a do or die game that saw both coaches shorten the lines the longer the game went.

The Jets pressed while the Oilers defended only to have Kitchener native Mark Shceifle get his 2nd of the game with helpers going to Wheeler and Connor getting helpers tying the game at three.

The Oilers managed only five shots in the third; while the Jets got a modest four shots on goal (SOG) in the third.

Both teams were in “game mode” to end the game in 60 minutes but for the hockey fanatics they were in for more playoff O/T keeping Manitoba residents up until the late hours. 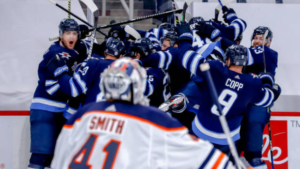 The first O/T and prior to double O/T, McDavid and Draisaitl looked dangerous but Winnipeg produced some of the best chances.

In what many on social media were describing as the battle of the West this game had what every hockey fan wanted which was aggressive play, fast skating, heavy hits and never giving up.

The O/T featured not one, not two but three O/T periods that saw a clearing dump out play by the Oilers on the left side only to be intercepted by Kyle Connor who managed to get a low shot stick side past Smith giving the Jets the O/T win eliminating the Oilers.

The Jets did manage to produce some quality chances and did received the only PP and almost a 5-on-3, but after the officials had a meeting of the minds no penalty was assessed to Oilers Darnell Nurse in the first OT.

Not being outdone, Jets speedster Nikolaj Ehlers got an impressive OT chance, only Mike Smith made the save.

Montreal and the Leafs play (at least) two more games, with Toronto taking a 2-1 series lead. 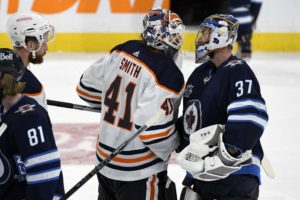 Ownership Committed To Winning
Gretzky Steps Down From Oilers
<script