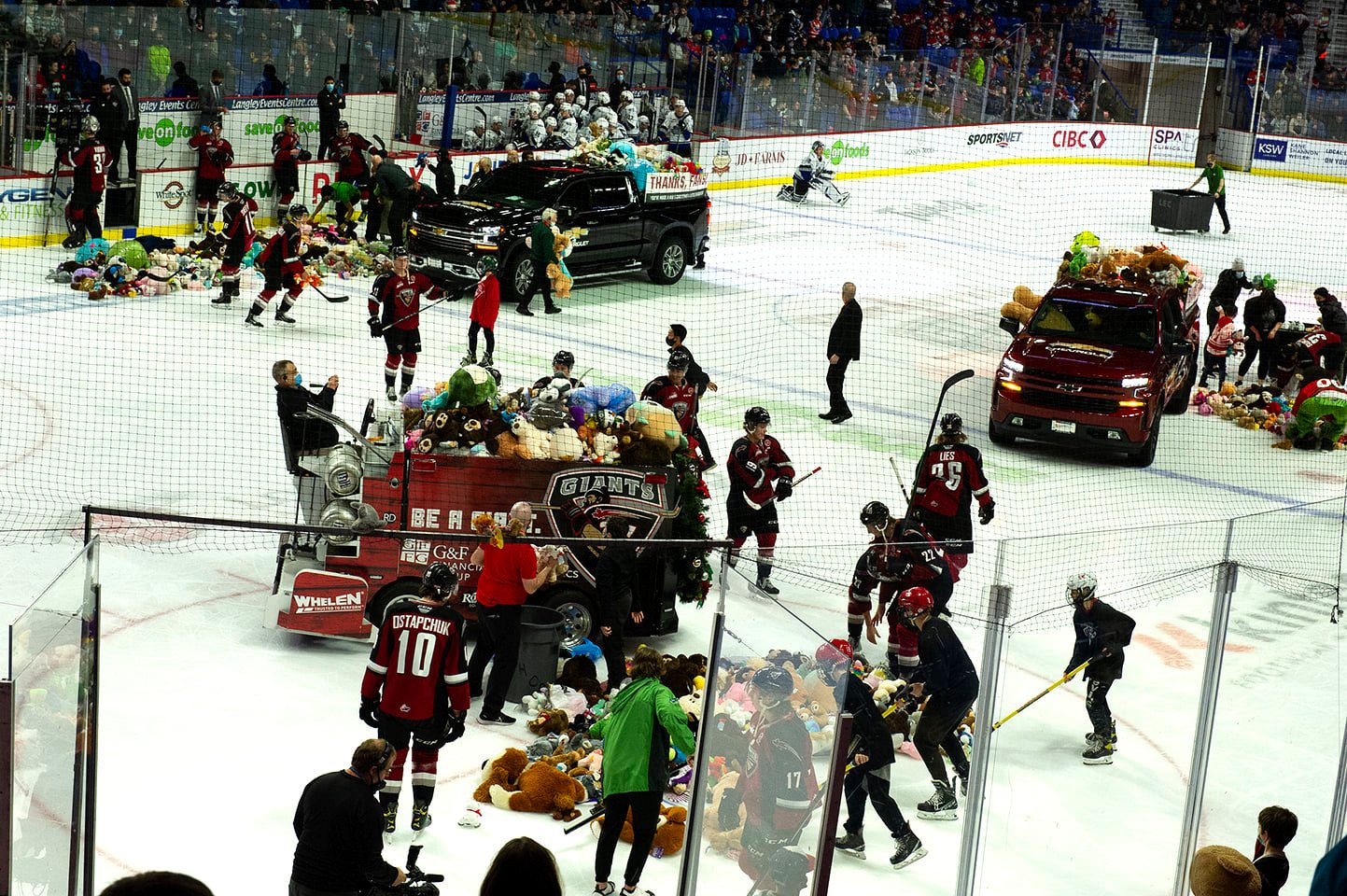 Each year teams hold their annual Teddy Bear Toss that brings delight to thousands of youngsters around the area and the Vancouver Giants are no exception to this tradition.

Prior to the latest phenomenon there was no real Christmas event to bring fans to not only cheer on their home team, but also put them in a festive spirit of giving – until recently.

Years back the San Diego Gulls were trailing the Stockton Heat by a 3-0 margin and were desperately in need of anything to bring their almost 10,000 fans to literally “shower” the ice with 16,000 Teddy Bears.

Time was working against them and hearing that the Gulls President of Business Operations, Matt Savant was worried about their promotion, but worry would be set aside.

With time working against them they were given a power play The birth of the teddy bear toss might be in dispute, but there was little mystery in the end for the Gulls.

With the game’s outcome at risk of being a “dud” the Gulls were unable to cash in on the PP, but all was not lost as at the next TV timeout the scoreboard instructed fans in to let the fur fly – and fly they did!

Eventually bears showered the ice and from here it grew so much that in 2015 the WHL Calgary Hitmen saw 19,289 fans fill the ice with 28,815 bears on the ice, which possibly is the teddy-bear toss record to this day.

This caught on by all  hockey teams not only in BC, but around the hockey world and in the lower mainland we see the Vancouver Giants continue this tradition which took place at the recent WHL game against the Victoria Royals.

The event was again covered by Sportswave Photographer Laird Allan, reporter Bruce Nolte who were on location to both capture and report on the event as we continue to do each hockey season.

For some the highlight of the night was having Michael Bublé in attendance at the game with his Family taking part in the opening ceremony.

As one might expect it doesn’t hurt to have a celerity such as Michael Bublé in attendance showing his support as well as his dedication to the lower mainland – the area he grew up in and comes home to on a regular basis considering that the Giants practice facility is the Ladner Leisure Centre.

The event was again a huge success  with over 4,000 fans in attendance who managed to throw over 6,000 stuffed Bears on the ice that were donated to the Langley Christmas Bureau.

Make note that the Richmond Sockeyes of the PJHL are hosting their annual Teddy Bear Toss Thursday December 16th at the Minoru Arena.

Seasons Greetings to you and your Family over the holiday season.