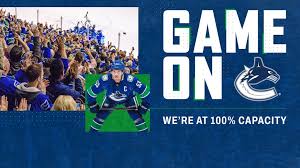 No different from the Beatles song called “The Long and Winding Road” from the 70ties album Let It Be could have been written years ahead of time thinking about today’s COVID-19 world where we have been locked up far too long.

In an earlier announcement by PHO, Dr. Bonnie Henry and Minister of Health Adrian Dix who are offering more glitter than gold when it comes to getting back to normal.

It’s been something that everyone in the Province has been waiting for as it opens up the road to playing amateur sports as well as tournaments throughout the Province.

In light of the announcement the following press release is listed below so enjoy the read and above all stay safe – we don’t want to go back to yesteryear!!!

“Today’s news was made possible thanks to everyone’s efforts and commitment in recent weeks and months as we all navigated the latest challenges of the pandemic,” said Michael Doyle, President, Canucks Sports & Entertainment, Business Operations. “But it’s now an exciting time to look forward again. The announcement today is great news as we head into our next Canucks home game on Saturday, and for our teams and fans in Vancouver and Abbotsford for the rest of the season.”

“The health and safety of our fans, employees, players and community continues to be a top priority as we safely open our doors to full capacity again,” added Doyle. “We will continue to follow provincial health orders at our games and live events at Rogers Arena and Abbotsford Centre as we welcome fans back to full arenas.”