Sunday’s first game of the day featured Tampa Bay travelling to Green Bay playing on a sunny 20 degree weather to see who would advance to play in this year’s Superbowl following three wins on the road.

First march down field  see’s Evans, who has 11 red zone plays this year, march down on a 3rd down play in a 4:01 drive down field for a 66 yd drive in nine plays.

Not the way in which the Packers were looking at starting in front of the 8,500 fans in attendance, but Rogers playing under his 5th watch sets up looking at winning his 3rd MVP.

First strike of the game saw Rogers sent a three pump route to Lewis for his first down, followed up by a failed hand-off

Second and nine saw Jones stopped by Jones and only the third time all season that they were stopped on the first play of the game at Lambeau Field. 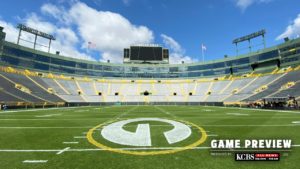 Second possession of the ball has 43 year-old Brady who has six Superbowl wins sets up key plays to Godwin for a 15 yard run for another first down.

The march down field failed forcing Tampa to kick giving Green Bay a chance from the Rogers who after being sacked for a loss set up a third and fifteen which Adams easily ran.

Rogers is five for five in his start with the first quarter coming to an end setting up an exciting second quarter for those in attendance.

If you’re going to get the fans back in the game that was what the Packers did a short 53 seconds in with a 50 yd TD play tying the game at seven.

Not being outdone by the Packers, Tampa started with a huge fun play that saw a 20 yd pass/run play setting up Fournette for the TD.

After the kick-off the officials ruled that the ball did not hit the goal line for a touch-back that saw the Packers throw a flag challenging the ruling on the field by the officials.

The challenge was success which moved the ball out to the 20 yd line that saw a short throw that has Tampa bring more pressure on Rogers.

With 5:02 left in the 2nd the Packers missed on three straight completions and saw them kick a short FG making it a 14-10 game for Tampa.

A missed holding call saw Tampa steel and interception after and seconds remaining in the quarter and taking a T/O they had a fourth and three with only six remaining saw Brady throw a 39 yd TD taking a 21-10 lead heading to the half.

Aggressive play by Tampa saw them punch the ball out of the arms of Jones that created a fumble turnover giving Tampa the ball again.

The first play after the takeaway saw Brady throw a play fake giving on to Brate to get his first TD from 8 yds out putting Tampa up 28-10 noting that Tampa has had seven postseason takeaways.

Green Bay have to rely on Adams, with Rogers knowing that his time in the pocket is short lived forces Rogers for quick release plays to the receiver.

Rogers finds Lazard moving closer to the goal-line followed by a quick pass to Adams for the TD trailing 28-17.

Green Bay have used nine different receivers through three quarters that have seen some quality passing from Rogers as he works on pulling them closer in the run/passing plays.

With the clock running down Tampa was charged with a helmet contact to the head moving the ball half the distance to the goal-line only to be stopped with a third and goal setting up a passing play to Adams for a two point failed attempt.

Not only is Rogers fighting the offensive line but also the clock having 22 lost yards on sacks to Brady’s 5 lost yards.

Savage put pressure on Brady forcing a jump ball only to be intercepted by Jones giving the Packers the chance to possibly pull ahead.

The questionable call was the kick late in the fourth quarter when the Packers gave Tampa the ball only to have the Packers called with 12 men on the field.

The strange part for the NFL is that the home team has never hosted a Superbowl in the 54 year history of the championship, but this year see’s a change.

This loss for Rogers see’s him go 1 for 4 in championship games and as the game wraps up this has Brady at the age of 43 is going to his 10th Superbowl Championship.

This had all the hype that it was promoted for so the key for Tampa is to stay healthy, get rested and don’t get overconfident.