Steve Nash a household name in British Columbia and was born February 7/74 and it was in Victoria where he was to achieve success in a sport that would bring him fame and fortune in the world of  professional basketball.

He grew up in Victoria BC and played high school Basketball at Mount Douglas for the Rams enjoying a fine education and then transferring St. Michael’s graduating with high honors.

Upon graduation from St. Michael’s University he received a scholarship to the University of Santa Clara in California upon graduation after four years where his success continued and he was drafted into the NBA 15th overall enjoying a stellar career. 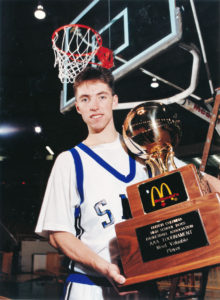 Nash carried the Santa Clara Broncos to NCAA appearances three times in four years on the campus enjoying a stellar College career on the court graduating with full scholastic records from there moving onto a successful career on the court in the NBA in his rookie year with the Phoenix Suns after being drafted in 1996 15th overall.

He was honored as the league MVP twice and finishing as a close runner and almost taking a third title but was barely beat out for by the slimmest narrow of votes he was a player that changed the way the game was played with an upbeat tempo and had a great vision of the court as well which made him unique as a player.

In his fourth season he was traded to the Dallas Mavericks and voted All NBA selection as well to his inaugural first NBA All-Star game leading them to the NBA finals in 2002-03 teaming up with Dirk Nowitzki and Michael Finlay coming up just short of winning the League title he became a free agent in 2003-04 and returned back to suit for the Phoenix Suns.

And leading the Suns to the western conference finals in 2004-05 again coming up short of advancing to the NBA finals but his play was unreal seeing the floor and teammates as clear as day and being named MVP in 2005-06 for his play on the court back to back but was barley beat for third shot as MVP.

ESPN named him in 2006 the ninth-greatest point guard of all time, Nash career stats league the league in assists free throw percentage at various points in his career.

He is also one of the top three players in NBA league history in three-point shooting, free throw shooting, total assists, and assists per game.

In 2006 he was named as one of the top 100 influential persons in the world as well he (Nash) has been honored for his contributions to various philanthropic causes.

It takes a special individual to achieve success as he has and to his credit and in 2007 he was rightfully appointed to the Order of Canada and invested in the order in 2016, and also recognized in 2008 by the University of Victoria and given an Honorary Doctor of Laws

Nash has played for the Canadian National team several times at the Olympics from 1991 to 2003 making one appearance and twice laced up at FIBA America Cup and taking MVP honors twice has also served as General Manager of his country for the basketball team.

Steve is well suited for the change which he was signed to as head coach of the Brooklyn Nets and has the ability to bring the franchise back to respect and leading them to winning ways for the next four years with his guidance.