Over the past week I have had several comments from various individuals, coaches, beer league players as well as some officials all voicing their comments made by Tim Peel, ex-NHL referee.

I hate mentioning that in a sentence simply stating that but regardless the comments and/or replies vary from pro to con on his dismissal.

As you can see the comments vary but all are direct and this photo is a former coach and I use that term loosely who was a total embarrassment to his organization, the league and USA Hockey. Long gone and NO REAL LOSS TO ANY SPORT!!!! 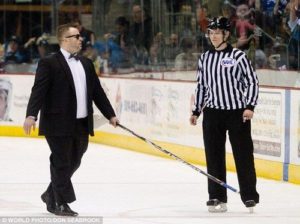 Campbell is an idiot who doesn’t know what he’s talking about. Goes to show you how much you know about the game

If you knew anything about the game you’d know this happens at every level and has for YEARS, Campbell is just dead set on changing the game until it’s as soft as Soccer

First of all, he didn’t get fired. I talked to him last week. He will still receive his pension. Also, the NHLOA is seeking damages.

The game has changed…we used to manage the game, score, calls, etc. Now however, especially at the highest levels, it doesn’t matter or shouldn’t matter anymore.

Unfortunately, there is an underlining acceptance that the “standard” changes from the regular season to the playoffs. That’s the issue.

First thank you Steve for the article and your comments on officiating as they are direct and to the point and if anyone could do justice to this issue it would be you.

I am a player and while I never agreed with all your calls I knew you were fair with no bias toward any player or team(s) you officiated which is unique and seldom happens with other ref’s.

I have followed your refereeing career for a long time and even watching you do hockey broadcasts it was great to listen to you explain why the call was made and how the ref saw it from his point of view.

Simply put if there were more officials like you what a welcome change to the game. Thanks again for the article.

Whether it’s game 1 or game 82, or game 7 of the finals….a penalty should be a penalty. It’s black and white, apply the rules of the rules book.

The issue becomes grey when the NHL and NHLOA continues to allow the standard to change as the season grows older.

As the game has evolved, increased in speed and eliminated “clutch and grab / interference” via new rules and adding a 2nd referee, it has also significantly limited or reduced any “game management” by the officials. Moving forward, the spotlight is too bright…game management will be gone and if the officials don’t comply, new officials will be hired.

The players/coaches/team will learn to adjust

This specific situation is not the true problem. I believe it’s exposed the greater issue.

Either call the rules as printed or come up with different versions for players/coaches/officials/fans to understand. “Tied Game Rule Book, Lopsided Game Rule Book, Playoff Rule Book, etc.” Could you imagine the NFL saying…”that’s not a playoff pass-interference”.

Once judgement was taken out of the protocol for officiating hockey, we needed to adjust. I remember being taught as a young official….if something happens and it’s not on the puck carrier, a turnover, deliberately obvious or injury potential then “use your judgement”.

As for you specifically, I didn’t realize until my late 20s that I needed contacts hence why I probably missed several dozen penalties against you but did somehow give you dozens of phantom assists. As for hearing any of your subtle compliments, well, you can ask my ex-wife or current wife, my listening skills have always been “a work in progress”.

*I appreciated our in game chats, battles and loved “managing” the game…I was good at knowing the temperature and letting things play out or tightening the standard. Oh the good ole days.

hey I’m totally open to a podcast that Would be great to talk about this with officials. Steve Erickson in my opinion would be a great in between.

Imagine Reffing the same teams over and over. Players get grudges and though refs need to be impartial they also get grudges. You can take only so much abuse and BS, it’s only human.

Funny how the scrutiny is on NHL refs they are clearly some of the best in the business, it’s not an easy job, did it for 30+ years, did I make mistakes, hell ya, but for the most part refs are fair and equitable, so just enjoy the game and quit the blame game.

How’s hockey officiating any different than most other sports. Have you ever even watched an NBA game???

If he wants to make a weak call to start the game and make that the bar for which to call all the others off of, there’s nothing wrong with that. All we need is consistency.