With the Canucks hitting the ice for another game against the Jets in two days one would think hockey talk would be surrounding Horvat and Sutter, but no such luck in the press box on this night.

As you might expect the talk was about the firing of (now former) NHL Referee who earlier in the day was released and sent to the “sin”-bin being assessed a Major penalty that holds extending consequences.

Being an official; many know that I personally will go to the end of the earth to explain rules to players or fans who simply don’t know or understand why any call was made, but on a note to officials if you expect to get any respect be honest, fair, on-time and most of all don’t make calls up.

Sadly; I am hearing that the situation involving Tim isn’t the first time he has been at the front of controversy in a situation that involved penalty calls and the previous one was in the game played 2012 in a game between Carolina and the Ducks.

For those who are questioning the severity of the infraction which the league was forced to act on was that he was involved in surrounded comments he made during a game in Nashville with his mic being ‘hot and live” so that everyone  was able to hear what he mentioned regarding a penalty call.

Realistically speaking my phone never quit ringing for the better part of the day in which various individuals were asking and wanting my thoughts on not only how he he acted but what he said and being honest this was a situation that was eventually going to happen, just at one point in any NHL game.

You have to ask yourself “Could a blown call result in a controversy for any team or better yet could the game be filled with several mystery or make-up calls and missed calls alike?

The problem is that it was Tim that was made the “scapegoat” for his actions which he clearly should have known better, but he was caught up in the moment while also understanding that he isn’t new to officiating with his first game October 21st, 1999 in Ottawa.

Reportedly the in-house mic overheard him boasting about whistling a penalty because he “wanted to” which was shortly after Viktor Arvidsson was assessed a tripping minor at 4:56 in the second period on an ensuing play, which apparently over looked and not called.

It’s reported that he said “It wasn’t much, but I wanted to get a f____kin penalty against Nashville early in the game” and ironically it was the in-house home team broadcasters who heard his comments.

The website scoutingtherefs.com says over the past five years, home teams get 52 per cent of power plays, road teams 48 per cent. 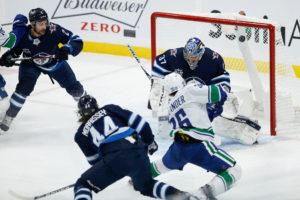 It’s rather ironic that his partner was Kelly Sutherland who grew up in Richmond and took up officiating probably as his Father Stan was a BCAHA minor hockey official.

The officials are under the microscope with each and every call they make due to video review even with a call such as “I was going to blow the whistle but never” after a controversial goal was scored.

While many who have never officiated any sport they are the ones that are quick to jump to the conclusion that all calls are either wrong or the wrong call with no real knowledge of the rules of the game.

Being retired as an on-ice official for over 60 plus years I can say that I watch a game far different from many due as I focus on not where the puck is but rather what happens after the puck is passed.

Officials have to make split second decisions to make the call and unlike other sports are under the microscope all in the name of the almighty dollar and the fans with the majority not knowing many of the rules.

It’s true that officials talk, but not to the extent of the comments made by Tim, but rather Junior officials discuss missed calls in the dressing room between periods while Minor hockey officials can only review any possible penalty situation when the game is over but clearly do not target any specific player.

It’s sad to know that this situation of a “go get-em” penalty infraction often happen on a regular basis in beer league and non-sanctioned hockey where many of the officials used are retired players who “think” they know the rules but honestly speaking they only there for the dollar.

Sad to say that, but it’s true and if you don’t believe me watch any beer league game(s) and yes some officials are better than others but that’s only a few and not all.

Having the luxury of attending Canuck games during this COVID-19 it’s amazing being able to hear every skate thrust, turn or comment made by any player on the ice, some of which are quite interesting but I have never heard a remark back from an official.

Penalties are instantaneous and should never be made on a delay from any official meaning if an infraction happens count the time such as one, two, three or four that it takes the official to raise his arm to indicate a penalty and should this happen it gives everyone a sense of uncertainty which has everyone questioning your call.

Personally, I have never ever seen this happen in the past nor would I have expected this to happen in any game let alone an NHL game but it did and you simply have to ask yourself “how would you react if you were the NHL Brass?”

Action was needed for the integrity of the game, the league but mostly the NHL Officials as everyone is so very critical when any penalty call is made by an official, especially in minor hockey.

So the next time you’re watching a minor game remember they are kids doing the game and don’t have the luxury of video review.

The young officials of today are quite possibly tomorrow’s pro’s – let alone the Son or Daughter of a neighbor so show some respect!!!

From the NHL’s press release

National Hockey League Senior Executive Vice President of Hockey Operations Colin Campbell announced today that Referee Tim Peel, following his comments during the game last night between the Detroit Red Wings and Nashville Predators, no longer will be working NHL games now or in the future.

“Nothing is more important than ensuring the integrity of our game,” Campbell said. “Tim Peel’s conduct is in direct contradiction to the adherence to that cornerstone principle that we demand of our officials and that our fans, players, coaches and all those associated with our game expect and deserve. There is no justification for his comments, no matter the context or his intention, and the National Hockey League will take any and all steps necessary to protect the integrity our game.”