Each and every year we get the chance to cover one of the most spectacular track events in Western Canada held in Burnaby at Swangard Stadium.

Due to Covid the 2021 event was held in various locations with this year being something unique for all who attended.

Sometimes, when you know you’re good and feeling in terrific race form, it’s OK to bet on yourself.

That was the case Saturday for Canadian racewalk veteran Evan Dunfee who decided that even though he would essentially be circling the Swangard Stadium track on his own in the 10,000 metres, his two-year-old national record was about to fall.

With the lapped Tyler Wilson being disqualified and Katelynn Ramage dropping out of the mixed event a quarter of the way through, Dunfee was a solitary figure as he walked on in seemingly effortless style, finishing in 38 minutes:39.72 seconds.

That smashed his previous mark by nearly 15 seconds and was the fastest time in the world this season.

“I put (the record) out there this morning, put all my cards on the table, telling people I’m going for it. No outs. Just put it on the books and see what happens. It was a lot of fun to just call my shot.”

The whole afternoon and evening at Swangard was a lot of fun. Covid-19 restrictions, which meant no athletes from outside the Lower Mainland would be allowed to compete unless they were nationally carded, made for a small field of athletes, but there were still some strong performances.

Mike Mason of Nanaimo high jumped a season-high 2.30 metres and was assured a spot in his fourth Olympics at Tokyo in July.

White Rock native Luc Bruchet went under the Olympic qualifying standard with a personal-best of 13:12.56 in 5,000 metres and women’s 3,000-metre steeplechaser Regan Yee of Hazelton lopped four seconds off her personal best with a time of 9:31.07 to move closer to a spot in Tokyo.

Dunfee, as personable and engaging an athlete as there is in Canada, said he’s used to basically competing on his own lately, racewalking without any pacers or wave-ilight technology.

Dunfee has been on his own since two of the other so-called three amigos who took team bronze at the 2015 world championships and put Canadian race-walking on the map called it quits.

“It’s been about three years now without any of my top teammates since Inaki Gomez and Ben Thorne kind of retired to go do bigger and better things, being lawyers and studying for PHds at Harvard and stuff and I’m still here walking.

“But it’s still a lot of fun to go and prove myself.”

Dunfee, of course, had an eventful first Olympics in 2016. He finished fourth in the 50K, but was bumped into the bronze medal position after winning an appeal based on a bump by Japanese runner Hirooki Arai that threw Dunfee off stride. 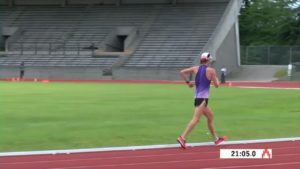 The Japanese then won their own appeal of that ruling and Arai was reinstated into third.

He says his new Canadian record in the 10,000 metres is a great confidence booster heading into Tokyo.

“It’s a really strong group of racewalkers (for the Olympics). All three of the Japanese are world class. They’re going to be at home, they’re going to have that advantage. The defending Olympic champion Matej Toth (Slovenia), he’s getting back into form.

“My goal is to just be as fit as I can be, prepare for that heat. I know I can race well in those conditions. But the problem is they all know that now too, so extra pressure to up that final one percent. I just want to stand on the start line knowing I’ve done everything I can do and then it’s just about having the best day I can have. If I can do that, then I know I can walk away proud.”