We received the following from Canada Soccer and wanted to pass on our congratulations to both Bob Sayer and Tony Waters on their recognition of the prestigious award.

Both individuals are extremely deserving of this recognition as indicated by the photo’s captured by D. Laird Allan at the ceremony held at BC Place Stadium and and on behalf of Sportswave we offer our sincere congratulations.

The following is the press release from Canada Soccer and the first part will be on Bob Sayer, followed by part two on Tony Waters and we thank them for the info.

Canada Soccer will honour two important contributors to the game in 2021 at the upcoming Annual Meeting of the Members: former Canada Soccer Vice-President Bob Sayer who will be inducted to the Canada Soccer Hall of Fame and the late Tony Waiters who will have his name added to the new Tony Waiters Coaching Excellence Award. 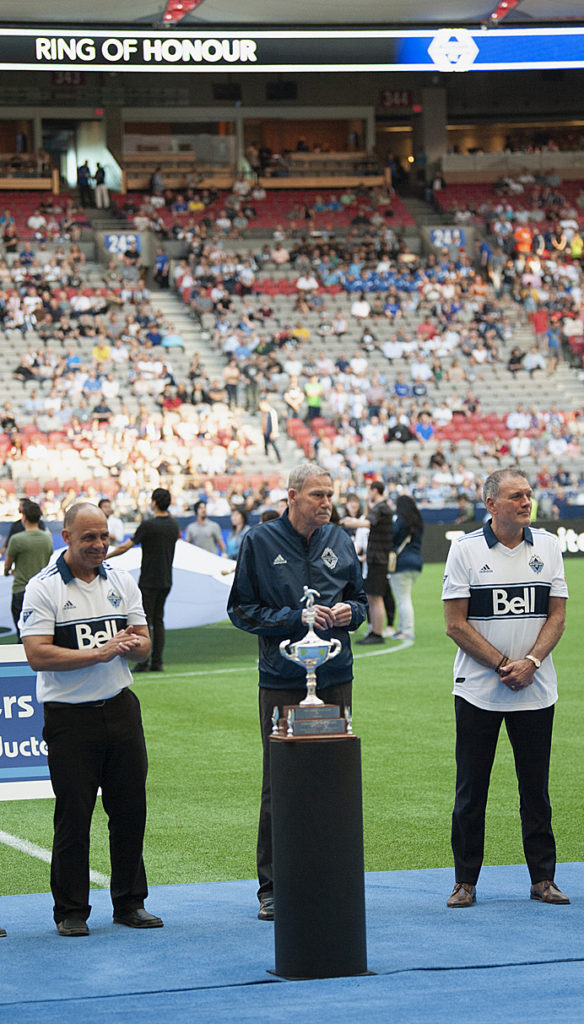 The Tony Waiters Coaching Excellence Award recognizes a person’s overall contribution to coaching in Canada for a minimum of 20 years.

The award is named after the late Tony Waiters, a former Canada Soccer Head Coach that qualified the Men’s National Team to both the 1984 Olympic Games and 1986 FIFA World Cup™ as well as won the first Concacaf Championship in 1985.

The first recipient of the new award will be announced in 2021 at the Annual Meeting of the Members.

Waiters, who passed away in November 2020, is an honoured member of the Canada Soccer Hall of Fame and was named a Canada Soccer Life Member at the 2019 Annual Meeting of the Members.

He served as Canada Soccer’s Men’s National Team and Olympic Team Head Coach for more than six years in two stints from December 1982 to February 1992 in both roles and until May 1992 as the Olympic/U-23 Coach. He was a recipient of the Aubrey Sanford Meritorious Service Award in 1996.

The Tony Waiters Coaching Excellence Award is an important addition to Canada Soccer’s awards & recognition program as it is the first, coach-specific award that celebrates coaching and coach education over an extended period of time.

“Tony Waiters was a monumental figure in Canadian soccer and we are privileged to name our new coaching award in his honour, the Tony Waiters Coaching Excellence Award,” said Dr. Nick Bontis, Canada Soccer President.”

He continued “Mr. Waiters played an important role both as a coach of our National Teams as well as an instructor and coach educator. He had an incredible influence on our game, our players and our coaches.”