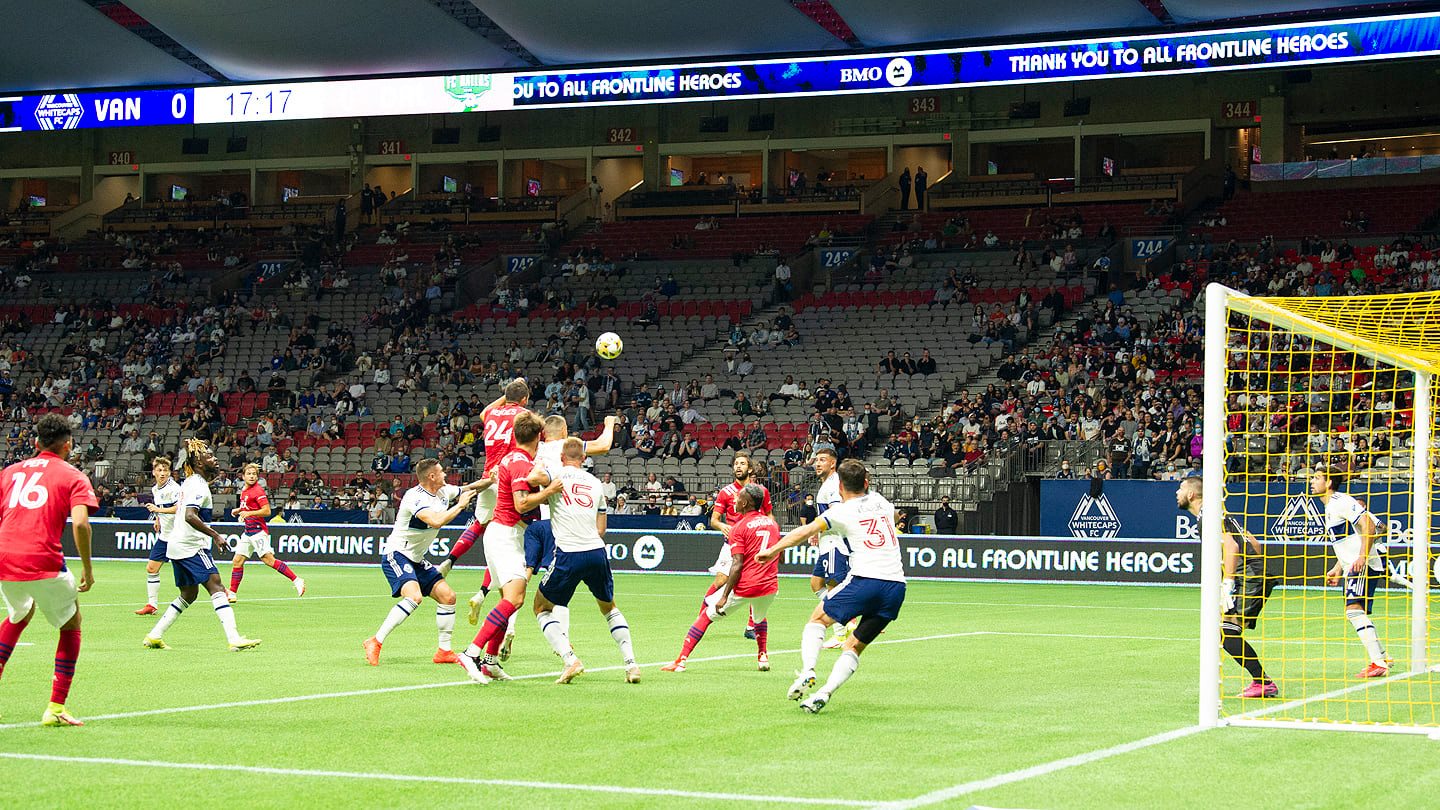 The Whitecaps came out and from the beginning it was obvious they were going to employ a structured and solid defensive game.  They took the lead at the 20′ on a goal scorer’s goal from a header from forward Kevin White from a beautiful cross from Russell Tiebert.

Vancouver continued their success against Dallas FC win as they took points for the fourth straight match with an impressive 90 minute 1-0 win in front of 11,312 fans.

Prior to the match Vancouver honoured frontline workers who continue to provide exceptional and tireless work during Covid-19 and are keeping us healthy, despite all the nay-sayers.

It was imperative for the Whitecaps to have a fast start against Dallas FC forcing them to make mistakes in their own half of the pitch creating turnovers, hopefully to get on the board early.

Vancouver opened the scoring in the 20th minute as Brian White headed home a cross from captain Russell Teibert from the edge of the Dallas penalty area giving them the early lead of the match.

Playing against Dallas FC saw them take points for the fourth straight match in front of 11,312 fans at BC Place going 2-0-2 the last their last taking 7 of a possible 8 points.

Vancouver came close to finding the back of the net with a cross that found Lucas Cavalini but was blocked off the line by the Dallas back four as well as other scoring chances only to be cleared away out of danger in the opening five minutes.

Dallas came back on a counter strike as Jesus Ferreira broke in off the right flank forcing Maxime Crepeau to pull off another impressive stop.

Vancouver opened the scoring in the 20th minute as Brian White headed home a cross from captain Russell Teibert from the edge of the Dallas penalty area to give them the all important first goal of the match to take a 1-0 lead.

Dallas pressured the Caps defense forcing the back four and Crepeau with scoring chances, testing Vancouver in the last 10 minutes of first half, but were held off the board.

Both Lucas Cavallini and Brian White had scoring chances off free kicks forcing the Dallas defense to be sharp in not giving any goals as the Caps took a 1-nil lead after the first half.

Minute 50 saw Brian White with a chance off a Caps corner that went wide of the far post past Jimmy Maurer while Caps Bruno Gaspar received a yellow card caution in the 52nd minute of the match.

Brian White had another chance in the 54th minute from the top of the penalty area that was punched away keeping the game close.

Lucas Cavallini received a caution in the 58th minute for a late foul while subs Dallas sent in the 60th minute with Jose Antonio Martinez in for Justin Che and Szaboics in for Paxton Pomykal.

The Whitecaps made changes in the 62nd minute as Deiber Caicedo went in for Lucas Cavallini and Jaivain Brown for Bruno Gaspar.

Both Teams played excellent soccer tonight creating chances at both ends of the pitch with the goalies Maxime Crepeau of Vancouver and Jimmy Maurer of Dallas sharp in the net to keep it a close match in the 71st minute yellow card caution to Dallas player Facundo Quignon.

The ‘Caps were able to hold on in the last minutes of the match to capture a crucial three points in their quest to secure a spot in the Audi MLS Cup Playoffs.

Vancouver has a midweek match against Houston Dynamo FC Wednesday with the kick-off set for 6 pm Vancouver time and return home Oct 2nd in a match against San Jose.

It was a Team solid effort and the clean sheet was largely due to Crapeau’s (Man of the Match) play.

The defence was solid and blocked many shots and WC’s keeper Crepeau was at the top of his game making 7 saves.

In injury time at games end, Dallas was awarded a penalty shot via VAR but the attempt was denied by Crepeau thus cementing the 3 points on their playoff chase.

Thanks to Vancouver Whitecaps for game stats:

In the 11th of play, Whitecaps FC took a moment to remember one of the club’s very first Kid Captains, Danielle Hoult.