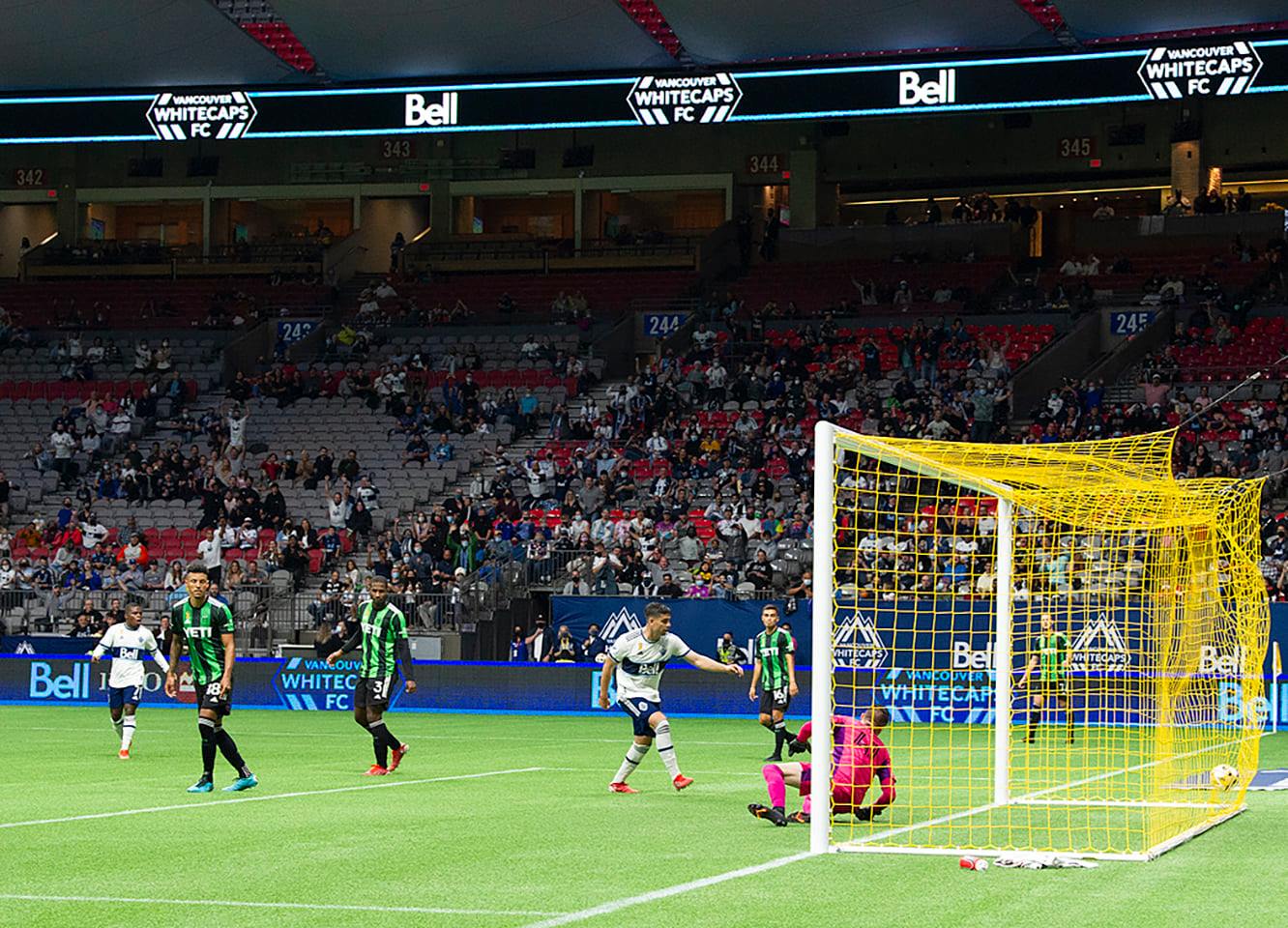 Vancouver entered the match in need of a win or at least a tie to keep their streak alive extending their win streak  extending their unbeaten streak to a franchise record 10 MLS games (7-7-8) having 29 points.

They are playing without Maxime Crépeau, Javain Brown, and Lucas Cavallini who are all away on international duty forcing acting head coach Vanni Sartini to make three changes to their starting lineup.

Austin’s Diego Fagundez got a yellow card for a late tackle on Vancouver’s Cristian Dajome in the 7th minute, while Vancouver’s best chance was in the 13th minute off a corner kick with Brad Stuver smothering the ball on the line keeping the game scoreless.

It was like a game within a game as both halves were far from being the same as both clubs had various chances that saw Austin limit Vancouver to one shot, while Austin had 5 in the first half on a goal by Midfielder Sebbastian Driussi in the 45th minute.

Vancouver’s best chance came in the 59th minute as Scotsman Ryan Gauld made a brilliant move on the Austin defender from just outside the penalty area that Brad Stuver got a hand on the ball deflecting over the crossbar out of play.

Both Ryan Gauld and Brian White exchanged scoring chances only to be turned aside, maintaining their lead.

Vancouver got the equalizer in the 70th minute on an Erik Godoy header off a cross from Cristian Dajome that saw Vancouver sub Patrick Metcalfe in for Leonard Owusu in the 60th minute, while Ranko Veselinovic came in for Janio Bikel in the 73rd minute.

Deiber Caicedo had a chance to put the Caps up 2-1 only to be turned aside by Austin’s Brad Stuver in the 79th minute after Caicedo chipped the ball over the keeper that was headed to the vacant net only to be cleared away by his defender Julio Cascante.

Gauld’s long shot brought the 9,223 Whitecap supporters to their feet on the initial shot which was followed by a more voiceterious cheer after Caicedo fired the rebound in the net giving the Caps a 2-1 lead.

Vancouver’s final sub was Ricketts for White in the 90th minute and Ryan Rapsos for Ryan Gauld.

Despite the win, they remain out of the final playoff position in the Western Conference as they improved to 7-8-7 on the season with 29 points trailing Salt Lake with 30 in the standings by a point for the final playoff spot in the west.

Vancouver host’s the Portland Timbers who visit BC Place September 11th with kick-off set for 7:00pm.

Following the match Santini told the media “In the first half they outplayed us and in the second half we did it to them.”

He continued “We made a couple of adjustments. They are a team that wants to have the ball, they exploit gaps when the other team is not very organized. We made those adjustments. The guys in the second half were flying. I think we deserved the win.”

A humorous piece of Whitecaps folklore!!

During his ABC broadcast he reported that the Whitecaps were from the village of Vancouver.

Of course the villagers won the Championship game.