I can honestly say that I never ever thought I would be at a sporting event with the stands completely empty, but in today’s world that is simply the reality.

After being away from home for 189 days or 11 months, they have played all between home games.

No different from other pro teams in Vancouver the Whitecaps have and continue to be strongly focused on being involved in the community, which says a lot about the professionalism of the team.

Attending today’s game is so different from previous matches, not just having no spectators, but having to follow the protocol of wearing a mask, having your temperature taken upon entry as well as the social distancing in the media seating area. 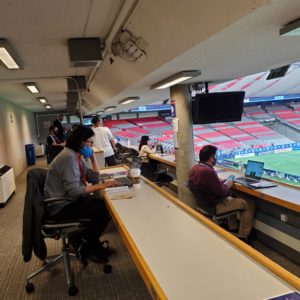 \It’s so strange to see the players sitting with two seats separating them, while the spare players are well off to the right end of the bench area as well as having no giant screen for replays.

The Whitecaps “It Takes A Village” art print by local artist Carson Ting  raised approximately $150,000 for the Greater Vancouver Food Bank and the Village Hero beer from Phillips Brewing.

The changes saw  the debut of Érik Godoy with the other two changes having Theo Bair and Leonard Owusu replacing Ranko Veselinović, Patrick Metcalfe and Cristian Dájome.

Regardless, this match saw the Whitecaps manage to overcome adversity given the recent games they have dropped, this 3-2 win.

They will put this game behind them and focus on next week’s match against Montreal.

Following the match, Head Coach Marc Dos Santos mentioned that he will work tomorrow with the players that did not play in today’s match, followed by a day off for the entire team.

Tuesday, they will return to regular practices with the entire roster, which he is hoping that they need to have a solid work ethic ensuring that they are 100% ready for Montreal’s match.

He continued saying “it’s important for all players to focus on what they face for the next couple of weeks, but did feel his players were somewhat of a threat.

Scoring three goals was something that Marc was overly pleased with, considering that they were in  somewhat of a drought which seemed to start in Miami.

He’s looking forward to playing Montreal, but mentions that soccer without fans doesn’t feel like a real game and he mentions “It’s very hard to adjust with, but the world is so, so different.” 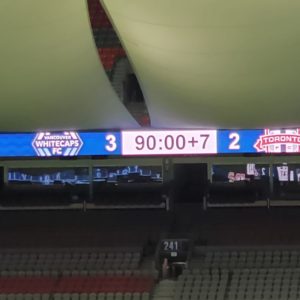 Not only was the coach pleased, Lucas Cavallini mentioned “he was please to score his first goal and he now knows that he’s not only playing for himself, but rather he understand he’s playing for the team.”

Here’s hoping  that they can keep moving forward as they prepare for Montreal September 12th.

Thanks to the entire Whitecaps media for their assistance!!