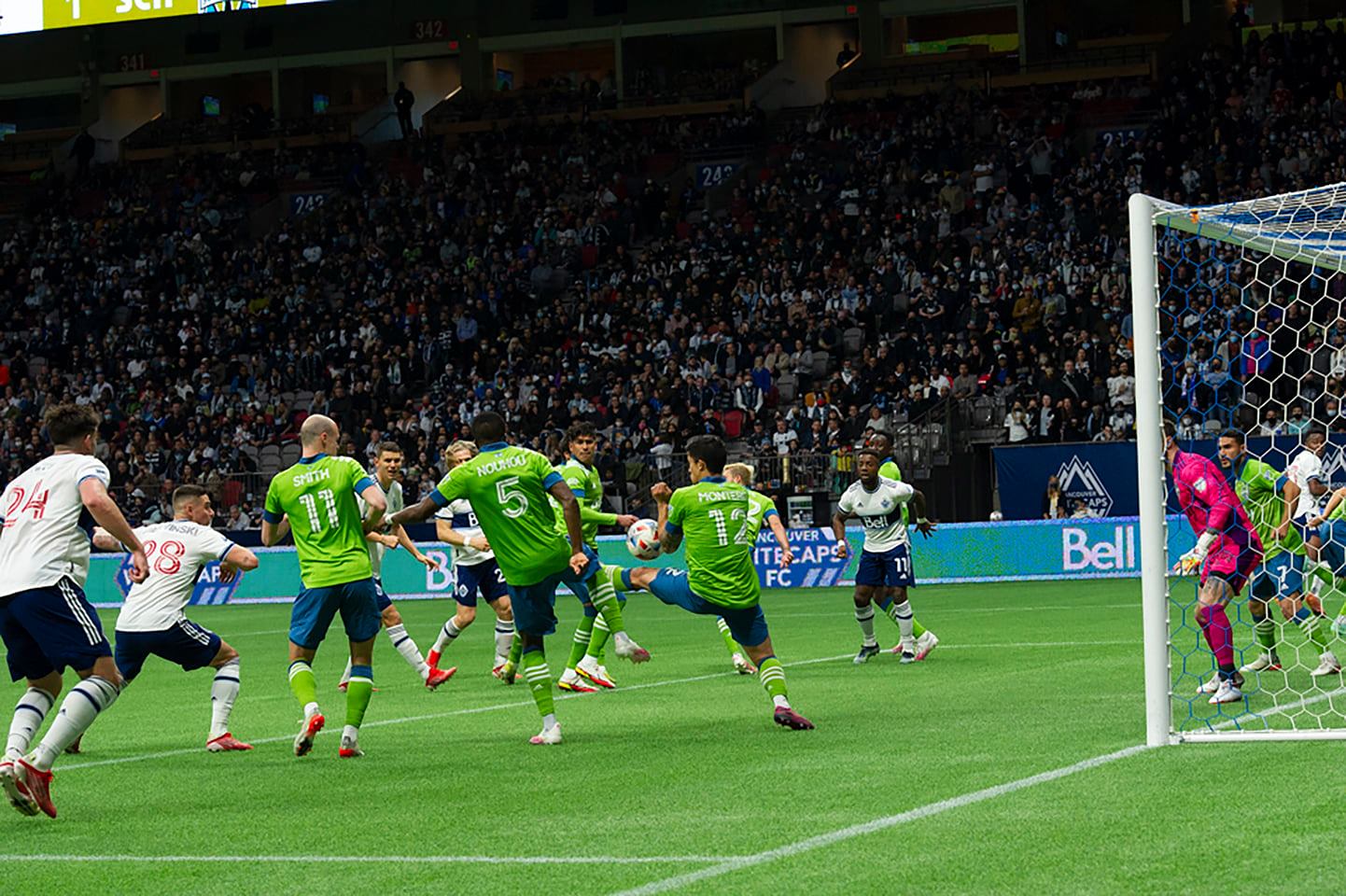 Many had written the Whitecaps out of postseason play assuming that they would simply focus on the 2022 MLS season and put the past behind them, but were the skeptics in for a shock!!

To the surprise of many the Whitecaps have punched their ticket to the 2021 Audi MLS Cup Playoffs after earning a win over their Cascadia rival Seattle Sounders.

The 1-1 draw sees Vancouver finish sixth in the Western Conference making their first playoff appearance since 2015 played on a “chilly” Sunday in front of what was listed as a sellout of 25,117 boisterous fans dating back to 2019.

For the past week the talk of the town was the Vancouver Whitecaps with many pondering their fate against their rival Seattle Sounders, but this match would live up to its billing.

The sound was deafening for those on the sideline or on the edge of the pitch such as Sportswave Photographer Laird Allan who was as excited as anyone in the building.

The opening two minutes of the match saw Vancouver go wide on the outside of the pitch, testing Seattle’s defense causing back-to-back corner kicks creating confusion for the Sounders “D” problems.

However the sixth minute saw the referee award a spot kick when former Whitecap Freddy Montero was taken down and was ruled a penalty kick that saw Montero give the Sounders the early lead.

Motivated by the enthusiastic crowd Vancouver continued to press Seattle, managing to even the contest in the 20th minute that saw Cristian Gutierrez send one in the box to Ryan Gauld who redirected it past Stefan Frei  for his fourth of the season tying the match at one.

With play in the Sounders corner Seattle’s Nouhou Tolo was frustrated with a call made by Referee Fotis Bazakos with the awarding of a penalty kick earning a yellow card caution.

As if one wasn’t enough Seattle earned a second yellow card in the 35th minute after a stop by Cap’s “keeper” Max Crepeau as the Caps defense took down Javain Brown was pulled down by Yeimar Arreaga.

The match would remain at one as both clubs headed into halftime that saw Vancouver return to the pitch looking for an early goal in the second half with both “tenders” being tested with added pressure.

Seattle entered the match with a record 17-8-8 with 52 goals allowing 32 against which is the least amount in the Western Conference sitting with 59 points atop the west.

On reaching the playoffs: ​

“I think we did a miracle. Pure and simple. And we’ve been fantastic. And I’m not talking about only my time in charge. I’m talking even before. If we went to the playoff, it’s also credit to Marc Dos Santos and Phillip Dos Santos that were here before because the team was already improving a lot. The team was starting to win. And so it’s their win too, not only the win that we’re here now. You have no idea, to stay in Salt Lake for a lot of months, we’re away from home. And it’s been fantastic, in the last 13 games, 14 games when I’ve been in charge we made 26 points. And today, if you look at the game today, in the last five years of MLS, we looked [like] Seattle, they looked [like] the other team. We looked a strong team, they’re happy to get away from BC Place with a point, because not so many teams can come here and make points because we are a very good team but also because we put everything and it’s a testament to the work of everyone, from the medical staff, to the performance staff. We fully deserve it.”

Can Canada Qualify For The Big One(s)?’
Whitecaps Eliminated