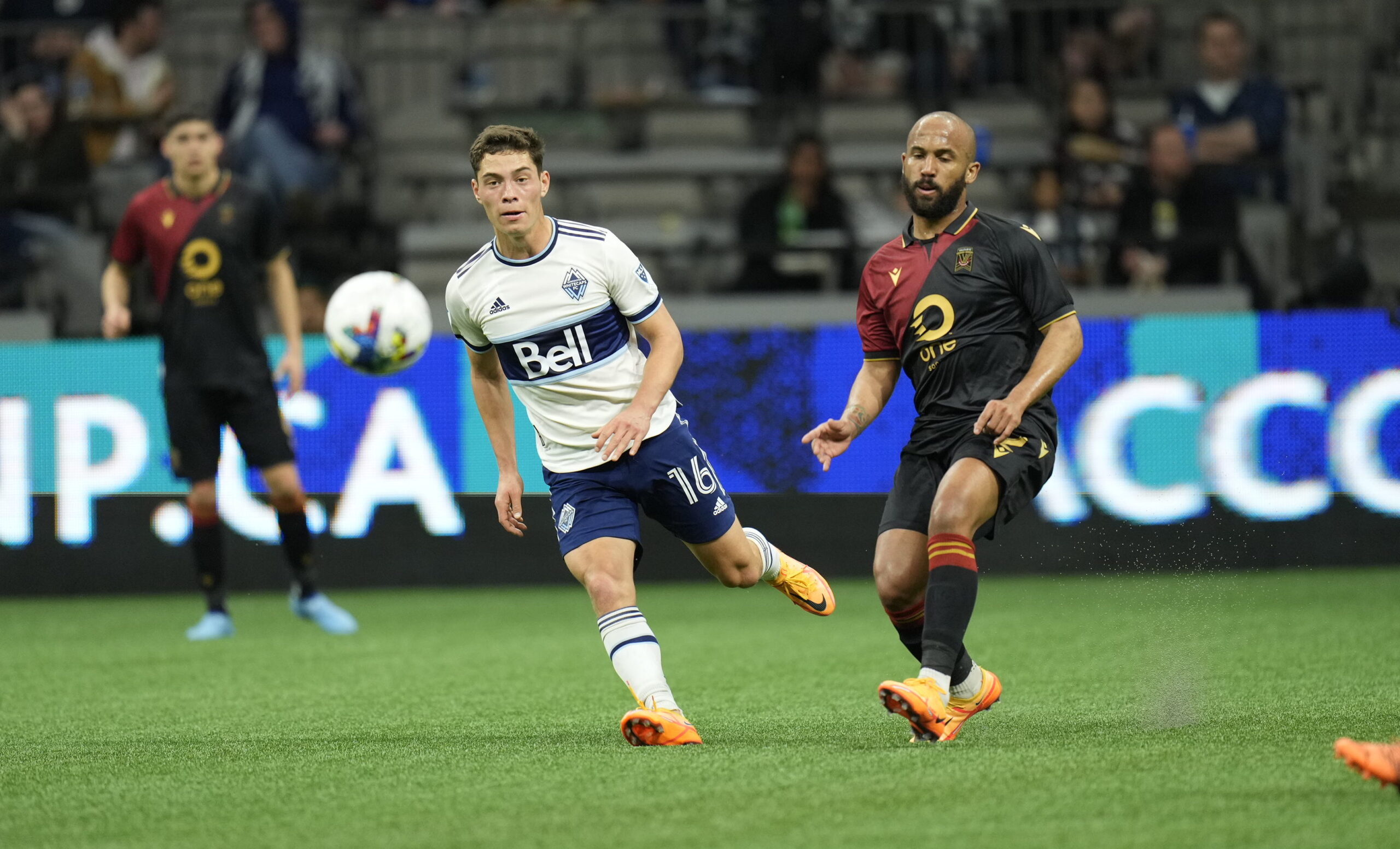 The Whitecaps played two games in a span of three days that saw them face the Winnipeg Valour FC in a CPSL match in the preliminary round of the Canadian Championship on Wednesday evening at BC Place.

In a mid-week match saw a small, but supportive crowd of 7,803 fans saw them shut out their Winnipeg Rivals 2 nil.

The Canadian Championship consists of thirteen clubs which stretch from the Halifax Wanderers to the Vancouver Whitecaps of the MLS.

Locally; the Caps entered the match with a 2-6-1 record with 7 points, while Valour FC’s record sits at 1-2-1 in CPLS play this season.

Valour FC started 6’7″‘ Rayane Yesli while Vancouver started Cody Cooper who was replacing Saskatoon’s Thomas Hasal who was out of the lineup with a hand injury in a match against Toronto FC this past weekend.

For those on hand at times it was like watching a cat and mouse game in the opening minutes with both trying to create openings at each end of the pitch.

Vancouver’s Russell Tiebert opened the scoring in the 19th minute converting on a cross to left flank Jake Nerwinski with the original shot taken by Ryan Raposo.

Vancouver added to their lead in the 23rd minute as Ryan Raposo got his second of the Canadian Championship after receiving a pass from Caicedo Dieber in the center of the penalty area giving the Cap’s a 2 nil lead.

Vancouver’s Michael Baldisimo left the game in the 33rd minute after being taken out of the game and replaced by Sabastian Berhalter.

The 38th minute saw a Yellow Card handed out to Winnipeg’s Diego Gutierrez by game official  Alain Ruch for a challenge on a Whitecaps player in the Valour FC penalty area.

Valour’s best chance of the first half came in the extra two minutes of injury time that saw Dyer Moses test Caps keeper Cody Cooper from the top of the penalty area who smothered the shot preserving the 2 nil lead at the half.

The second half saw sub’s made by Valour FC as Andy Baquero entered the match for starter Alessandro Riggi when they finally got their first scoring chance on a free kick into the Vancouver penalty area in the 52nd minute.

This was followed with a caution to Vancouver’s Lucas Cavallini in the 53rd minute kicking the ball away narrowly outside their penalty area, while the 58th minute saw a shot deflect off a Caps defender and out of bounds.

The 59th minute saw play inside the Valour FC penalty area that forced Raposo get robbed with the ball going over the line for a corner kick, forcing Yesli to make a difficult save keeping Vancouver in the lead.

Vancouver made three subs in the 61st minute that saw Brian White, Pedro Vite and Javain Brown enter the match forcing them to make changes with the Caps libe-up.

Former Whitecap player Brett Levis entered the match in the 69th minute as a sub for Valour FC while Vancouver sent in Cristian Dájomein the 72nd minute for their final sub of the match.

The Whitecaps now advance to the quarter final Canadian Championship where they will face the Calgary Calvary FC in the next round of qualifying for the Canadian Concacaf.

Whitecaps FC continue their home stand at BC Place with a match against MLS side San Jose Earthquakes this coming Saturday, May 14. Kickoff is set for 4 p.m. PT.

MATCH DETAILS (Thanks to Whitecaps)

Quote Sheet (Thanks to Whitecaps)

“I think we were relaxed, also we approached it with the right mindset to play a real game, to play on top of our game and I think we played a very good first half. I think the first half was a quality first half. Lot of chances, we showed that we were the higher league team and I was very happy. I think that we relaxed too much in the second half. I wanted to see more hunger from the players and to close the game because 2-0 is always an open game, because everything can happen… I think we relaxed too much and I wasn’t very happy with the performance in the second half, I think there wasn’t the intensity that we needed but we took care of business in the first half.”

On the upcoming schedule:

“I love it, to be honest. I like it. I like it so I can tinker the formation without you saying that I changed too much. We need to be very careful. I want to be again very, very, very, very clear. We’re going to play San Jose, Dallas, Charlotte and then Cavalry. On the next four games, the most important game is the one against Cavalry. That’s clear and because it will give us the possibility to go into the semifinal. So we’ll have, of course, to juggle the 11 every time and try to play the best team in every game. I’m happy that Leo [Owusu] is back, Guti [Cristian Gutierrez] is back, Caio will start training full tomorrow then in two weeks he will be able to play again. So we have players now and we can make rotations. And maybe there’s magic from immigration and Cubas is here next week. It’s going to be good because I have a lot of players now that can play.”

On the attitude heading into the match:

“I don’t think there was pressure within the group. I think that was more outside where people were saying ‘Oh Whitecaps this, Whitecaps that,’ At the end of the day everyone’s calm, cool, and composed. Training all week, not one person was thinking about last year, the year before. We knew that we had to come in and play our game. And if we did that, then we would advance. I think for 25 minutes today we did that, and that was good enough.”

On the win and home stretch:

“Yeah, we definitely could have got a couple more. No, but it’s good for the confidence, good for the team. No one’s overly excited like they weren’t expecting it. But yeah, it’s good for team morale, and it’s good for the team to get a couple of goals and more importantly to keep a clean sheet. Two games in a row where we haven’t conceded. At the end of the day we’re good at home. If you look at the statistics from when we came home from RSL and we’ve played here at BC Place, we’re a good team. I think a lot of teams realize that – I think we’re the best team at home since coming home from Salt Lake. So I think teams don’t take us lightly. They understand that coming to BC Place is going to be a challenge every time they come.”