Shannon Kane Player Of The Year 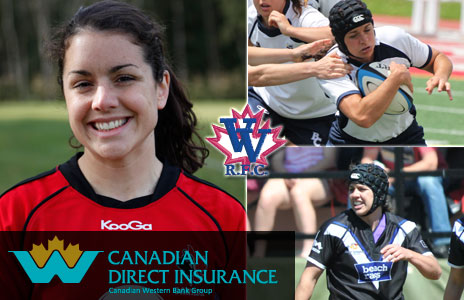 Velox RFC’s Shannon Kane is BC Rugby’s 2012 Canadian Direct Insurance Women’s Player of the Year.
A versatile back row forward, Kane was a key figure in Velox’s undefeated provincial Adidas Women’s Premiership season this past Spring as the Valkyries lifted their first Gordon Harris Memorial Cup since 2008.
Velox’s league-leading offence averaged an astounding 45 points per game, with Kane ranking third in team try-scoring with four to her credit. In the 2012 provincial final against Burnaby Lake Rugby Club, Velox fought back from 7-0 down and secured the title with a 20-14 final score line.
Kane was lethal at the breakdown and stretched Burnaby’s defence throughout the full 80 minutes. Kane went on to play for BC’s provincial team at the National Women’s League Finals in Quebec this past July where the squad finished as runners-up to Ontario.  “Shannon is known for running great lines and her ability to get around the pitch,” said Kane’s teammate Marlene Donaldson. “Her biggest assets are her fitness and her pace. She is full of energy and always seems to pop up at every breakdown.”
A former national team age grade rugby standout at the U19 and U23 levels, Kane has recently spent the Fall pursuing bobsledding.
This past November, Kane was competing at the North American Cup and continues to excel on the track in tournaments held in Whistler and Calgary. Four of Kane’s Velox team mates also received Player of the Year nominations including the league’s top try scorer Jesse Olynyk (14 tries), Lindsay Anderson, Natalie Tam and Selinna McGinnis. Kane is the first Velox RFC member to be awarded the provincial distinction since Charlotte Haley was recognized in 2007.
For more updates visit her blog at theshannonkane.tumblr.com

BC Rugby Player of the Year Past Recipients