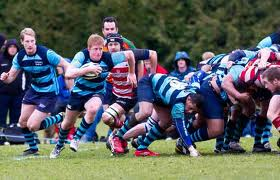 Round three of the 2011 Spray Elite League competition is underway this weekend with two sides in the hunt for a 2012 Canadian Direct Insurance Premier League berth squaring off.

The game of the week will feature Capilano RFC (2-0) hosting the Bayside Sharks (2-0) on Saturday at Klahanie Park.

Capilano RFC and Burnaby Lake Rugby Club are currently sitting on top of the Spray Elite standings with 10 points a piece while Bayside trails with nine.

With such a tight race and short time frame to qualify, a single loss could derail any hopes of securing the automatic berth.

Five teams are already through based on last year’s Premier League finish as the UVic Vikes, Castaway Wanderers, James Bay Athletic Association, UBC Old Boy Ravens and Meraloma Rugby Club await to see who will join them in the top flight.

There will be a second chance to qualify this Fall, as the seventh berth will be contested for in a round robin between the next four highest Spray League finishers and Vancouver Island’s Velox Valhallians.

After failing to qualify for the 2011 Tier One competition, West Vancouver’s Capilano RFC appears to be back with a vengeance.

They held Abbotsford try-less 34-3 on September 10th and then ran away with a 48-27 victory over UBC last weekend. Kayne Tapiki’s boot has been especially lethal, kicking six conversions and a penalty for 15 pts., ranking fifth overall in scoring this season.

In their most recent meeting, during the 2011 qualifying rounds back on February 5th, Capilano edged Bayside 16-10 at South Surrey Athletic Park.

With their new head coach Pat Kearney at the helm, the Sharks are chomping at the bit to prove they belong in the top tier of Premier rugby in British Columbia.

Kearney guided the Sharks to a 19-11 victory over defending Miller Cup champs UBC Old Boy Ravens in week one, and then saw his side run rampant over a depleted Meraloma roster 80-11 last weekend.

The Sharks currently boast the Spray Elite League’s top scorer in Peter Clifford who leads the field with 29 points through a try and 12 conversions.

Their top try scorers each boast 15 points with Keaton Styles (formerly of UVic) and Koresi Ledue each scoring three a piece.

Capilano will host a triple-header this weekend starting at 11:30am when their Third Division squad faces off against the Surrey Beavers. T

he First Division game between Capilano and Bayside is scheduled for 1:00pm with the Spray Elite matchup slated for 2:30pm.