Years back covering amateur sports seemed to be the “thing to do” for some, but not all TV stations and the only one still focused on broadcasting this level of the game is Eastlink TV, formerly Delta TV.

While we sit home with not much to do, unless the wife has some unattended chores, I find myself reviewing some old games I have covered for Shaw TV, Rogers TV as well as Delta TV.

While the quality might be hard at times to watch listening to some of the players or coaches names brings back some quality memories.

I recently posted a game on Youtube from the 2001 Keystone Cup Championship that I worked alongside Terry Murray and Keith Frew that was hosted by the Ridge Meadows Flames at Planet Ice in Ridge Meadows. 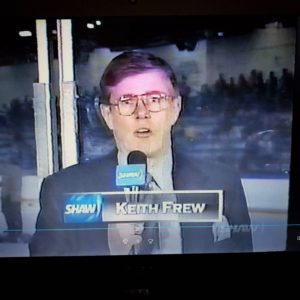 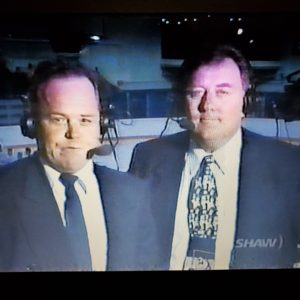 The championship game saw the Flames come up on the short end of the scoreboard as they dropped a 3-1 thriller against the Assiniboia Southern Rebels in front of a sold out crowd.

The game featured an empty net goal in the dying seconds of the game that saw the Rebels seal the win.

With stat’s being what they are in today’s world, it’s interesting to note that the Assiniboia Southern Rebels were founded in 1992 and managed to win three Keystone Cups between 1996 and 2003.

Following the game Keith spoke with the BC Director of Junior B hockey, Ian Currie who mentioned that they were looking at making various changes to the format of the event, which are used in today’s tournament.

Each and every year a Junior B team plays host to a four-day tournament that see’s four provincial teams compete for the Cyclone Taylor Cup Championship.

This championship in years past was known as the Keystone Cup, which saw teams from Western Canada compete for the National title.

The cost was enormous for all clubs, mostly for the teams that were travelling on short notice given the fact they never knew who was attending until after they won their provincial title.

The teams that competed for this championship were finalized through a round-robin of the winner of the BC’s Cyclone Taylor Cup, Alberta’s Russ Barnes Trophy, Saskatchewan’s Athol Murray Trophy, the Keystone Junior Hockey League, and Northwestern Ontario’s William Ryan Trophy.

Truth be known the initial idea for this championship was great, but the cost overrode the tournament for any team that managed to win their provincial title, but the cost was too much of a burden.

It wasn’t until the 2018 season that both Alberta and British Columbia withdrew from the event where Barry Dewar, then GM of the Kamloops Storm voiced his concern about accommodations and playing conditions in Manitoba and Northwestern Ontario which were never proven, nor acted upon.

The PJHL over the years has been well represented with various teams winning the championship that saw the host Richmond Sockeyes defeat the Delta Ice Hawks by a 5-1 trouncing with all games played at the Minoru Arena.

This past event was cancelled due to COVID-19 and if all goes to plan next spring will see the Delta Ice Hawks host the event with all games played at the Ladner Leisure Centre.

If you happen to do a check of some of the names, you will notice that some of the players went on to play at a higher level.

It was interesting to note that the three officials used in the game were Ian Caldwell, Jamie Linden and Karl Christiansen.

More in Reflecting Back