The defending Stanley Cup Champions Tampa Bay Lightning dominated the Canadiens pulling off an impressive 6-3 win in game three at the Bell Centre in front of a mere 3,500 fans.

After discussion with my sources I found out that the reason for the low number of fans is due to Provincial criteria that require over 80% of the population to be vaccinated before opening up any facility.

Tampa are one win away from taking their second straight cup championship after taking a 3-0 series lead in this year’s finals, which ironically is the first game of a final in Montreal in 10,050 days which dates back to 1993.

Tampa opened the scoring from a point shot that saw Jan Rutta get one past Carey Price at 1:52 in the opening period to give the Lightning a 1-0 lead.

A short 1:25 later while on the PP it was Tampa’s Victor Hedman who ripped a slapshot past Price putting the Lightning up 2-0.

Possibly overdue but more of a calming down period Montreal called a TO in hopes of settling the rattled squad down.

Many were questioning the scoring ability of Montreal, but eventually the Habs got on the scoreboard with Phillip Danault getting the Habs within one.

goal as he rang the shot off the goalpost past Andrei Vasilevskiy with 8:44 left to cut the score to 2-1 with the Lightning up on the Habs.

Montreal had chances to get the tying goal but it was Tampa’s Andrei Vasievskiy who turned the Canadiens shots aside, sending Tampa to the first intermission holding a one goal lead.

The second saw Lightning’s Nikita Kucherov (playoff leading scorer) take a Palat pass going in with a two on one managing to beat a desperate Carey Price giving Tampa a 3-1 lead. 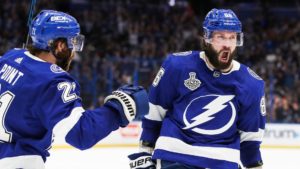 Tyler Johnson got an unassisted marker, (second of the game) with 4:41 left in the third, extending the lead to 5-2 with time working against the Habs.

To the surprise of Tampa it was Canadiens Corey Perry who got one 39 seconds later beating Vasilevskiy cut the lead to 5-3.

Lightning’s Blake Coleman put the game away for the defending champs, managing to grab an MT net marker at 3:1 marker to double the score to 6-3.

From there it was all Tampa who shut down the Habs for the remainder of the third, moving them one win away from their second consecutive Stanley Cup title.

The Canadiens outshoot Tampa by a 35-30 tally in a contest that forced Vasilevskiy to make 32 quality saves in the game, while Montreal’s Carey Price finished the game stopping 24 of 29 shots in the loss.

Game four goes Monday night at the Bell Centre with the faceoff set for 5:00 pm BC time ass shown on Sportsnet.