The Canadiens staved off elimination playing probably what some call their best game to date of the series game in game five against Tampa beating the defending champs in front of the allowed 3,500 fans at the Bell Centre.

Prior to the start of the game the Canadiens paid tribute to Columbus Blue Jackets goalie Matiss Kivlenieks, who died of chest trauma from an errant fireworks mortar blast in what authorities described Monday as a tragic accident on the Fourth of July in Novi, Michigan. 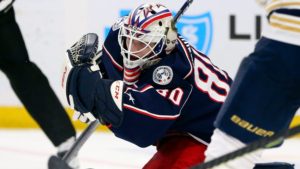 It’s reported that he was in a hot tub and tried to get clear along with several others as released by police Lt. Jason Meier.

Originally police said the young Latvian slipped and hit his head on concrete, with the team saying Kivlenieks’ death resulted from an apparent head injury in a fall.

Montreal had requested that Canadian health officials allow Lightning players’ immediate family members to travel to Montreal but were denied the exemption.

The O/T win came off a scramble play to the left of the net that saw a sprawling Josh Anderson net the game winning goal at 3:57 putting on hold any chance of a series sweep by Tampa.

Anderson was shifted to a new line, playing alongside Nick Suzuki and rookie Cole Caufield in Ducharme’s bid to add more speed.

Montreal was outscored 14-5 in the first three games, including a sloppy 6-3 loss in Game 3 on Friday.

They got off to a better start Monday, thanks to Carey Price stopping 12 shots in the opening period

Given the fact that Tampa won last year’s championship in Edmonton it’s no  real surprise that Tampa Mayor Jane Castor suggested, a day earlier, that perhaps the Lightning “take it a little bit easy” in order to win back home.

Montreal came out showing a gritty performance that saw Josh Anderson (4th) put them up after a set-up from Nick Suzucki at 15:39 giving them the early 1-0 lead.

This saw the Canadiens improve their playoff record to 8-1 when scoring first with Tampa outshooting the Habs 8-6 after 20 minutes.

Tampa came out with more jump in the second that saw both teams have several close-in chances, but it wasn’t until 17:20 that saw Barclay Goodrow score his 2nd of the playoffs tying the game at one with helpers going to both Blake Coleman and Ryan McDonagh.

Carey Price was forced to make several impressive saves keeping the game within reach with both teams tied after 40 minutes.

It wasn’t lost on Canadiens assistant captain Brendan Gallagher how Anderson provided his teammates with a rallying cry a day earlier when he said: “We’re not finished yet.”

“We understood the hole that we were in, but we just kind of talked about it: Find a way to win one game here,” Gallagher said. “(Anderson) stepped up and scored a couple of big goals for us. It’s going to be the same thing next game.”

With the addition of Alexander Romanov into the Habs line-up he managed to score his first playoff goal at 8:48 as well as becoming the youngest Canadiens D-man to score in a cup final with the assist to Jake Evans putting the Habs the 2-1 lead.

Tampa continued to press, catching the Habs in an outmanned situation deep in the Habs zone that saw Pat Maroon collect his second of the playoffs at 6:22 left in regulation time tying the game at two.

Tampa pressed in the final minutes but were unable to get the game winner in regulation time and if not for Carey Price the cup might be heading south for the second time in as many years.

With time winding down  in the third and the Canadiens season on the brink of elimination Habs D-man Shea Weber was assessed a double minor for high-sticking with 1:01 remaining in the third period in what some might call a photo finish.

As both teams headed to O/T it was anyone’s guess as to who might score the eventual game winner sending the championship to Tampa or giving another life to live to play again.

Entering O/T saw Tampa carry the additional three minute PP which put more pressure on the Canadiens penalty killers with Price coming up huge keeping them in the game.

Cole Caulfield fired one on target with the rebound bounce out to Anderson’s stick at the edge of the crease that saw him fire home for the game winner at 3:57 giving the Habs the 3-2 O/T win forcing game five.

Tampa outshot the Canadiens by a huge 34-21 shot total that has Tampa head home for a chance to lift the Stanley Cup in front of their hometown fans.

Montreal entered the playoffs with the worst record among the 16 qualifiers before rallying from a 3-1 series deficit against Toronto. Montreal then swept Winnipeg in the second round and eliminated Vegas in six games in the semifinals to advance to its first final appearance in 28 years.

Tampa has a chance of winning if they don’t go 0-for-5 on the PP  as well; they hit three posts with the man advantage.

No real surprise as they’ve bounced back before after losing potential clinching games and had clinical performances (last year against Dallas, Game 7 vs. Islanders).

During the media press conference Perry told the press “Price’s play is among the reasons the Canadiens remain confident going forward and he definitely gave us a chance last night to get our feet wet and then start our engine,”

In NHL playoff history, only four teams have rallied to win a series after losing the the first three games, with Toronto the only one to do so in the final in beating Detroit to win the Cup in 1942.

The Los Angeles Kings were the last team to overcome a 3-0 series deficit by beating San Jose in a 2014 first-round series. 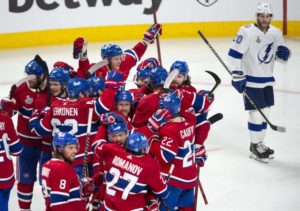