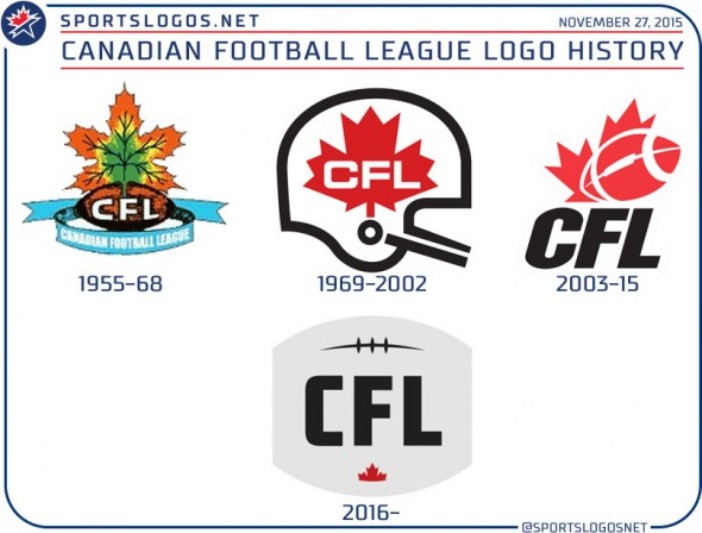 The 103rd Grey Cup was hosted in “Chilly” Winnipeg with Edmonton pulling off an impressive win over the Ottawa Red Blacks which has some questioning the “name”?

The game itself was impressive to watch and if you are an Ottawa fan, your dream lasted until the last quarter when it official died while reviewing an instant replay of an incomplete pass.

The hype of the game was front and centre for the past month all in hopes that the CFL could attract a more younger audience to the game north of the 49th, considering more and more are turning in to the NFL product.

True Winnipeg did an impressive job in playing host to the championship, but whatever they did as a city was thrown a wrench when the announcement of a new logo was unveiled. Thoughts??

Ok let’s face it, the game has changed in a variety of ways, but like it or not, the league has more issues to address than a change of the logo.

League commissioner Jeffrey Orridge had the honors at his first Grey Cup state-of-the-league address and we are hearing that the change is targeting a younger demographic audience, both on and off the field.

Since he was hired last March he said that attracting younger fans is a top priority for the league and in May, they (CFL) joined up with Whistle Sports, a multi-channel digital network with millions of subscribers on various platforms including YouTube and Facebook.

Social media is the way of the future, if not the present, but attracting today’s youth is more than simply changing a logo and any young person will tell you that!

This season they (CFL) adopted several significant rule changes which include pushing converts back 20 yards and moving up two-point attempts two yards.

The changes implemented helped create an 8% increase in scoring (44.5 points per game this year compared to 37.7 in 2014) while shaving three minutes off the average length of games which was listed at two hours, 52 minutes.

In addition and putting far more onus on the game officials the league saw a 9% increase in penalties, which resulted in far more criticism of the CFL officials.

In conversation from some of the fans attending, the game takes too long to play, has far too many penalties and simply does nothing to entice fans to come to the game.

It’s all about being entertained and getting your money’s worth is what the fan’s will tell you, regardless of what the sport is or where you play.

Ticket’s range on the high side to $65 in Saskatchewan to $140.00 in Montreal and that’s not the end of the spending, it’s parking, souvenirs, food and listening to music that is far too loud making it so the fan’s are unable to talk to each other. Some people agree that when they go to a sporting event, they want a souvenir from the game. Prices can vary depending on the memento, for example a t-shirt will be more expensive than a wristband. Sports matches produce small merchandise, such as caps and wristbands for those fans who don’t want to spend a lot to remember the day. Alternatively, you could consider getting your own rubber bracelet made to remind you of the event. You might want to look at SleekWristbands.com for example, to design yours.

Aside from all the above, it’s a great sport that has value, but given what the fans have to do, it takes a true dye-hard to attend the games.

In 1958 the CFC separated itself from the governing Canadian Rugby Union and adopted the Canadian Football League, which is still used.

Several of the teams currently playing in the CFL pre-date the formation of the league due to the merger in 1956.

The merging of the leagues led to two teams using the same nickname, which is the Ottawa Rough Riders and Saskatchewan Roughriders, or at least until the Ottawa team folded in 1996.

The league played with the same eight teams until 1981 when the Montreal Alouettes folded, then in 1993 the league expanded into the United States.

This saw the addition of the Sacramento Gold Miners and by 1995 the league split into two divisions, which were one Canadian and one American.

The following season every American team either relocated or folded and the league eventually returned to play only in Canada.

So while they put a solid product on the field, things have to change and first and foremost, it’s about entertainment and not some silly logo that does nothing to impress.

I have to ask why the league never held a contest for school age kids to design a logo and invite them to the Grey Cup?

Makes sense to me?