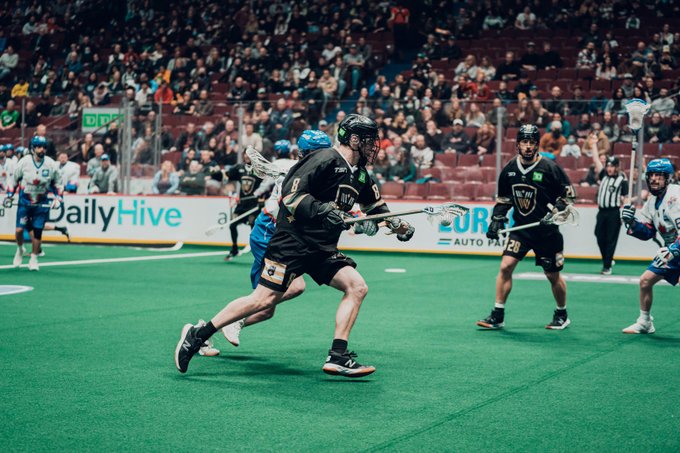 While the night was damp outside, the temperature inside Rogers Arena the Warriors jumped out to an early lead at the 3:40 mark that saw Loewen give them the only goal or the quarter.

Toronto was on the other hand rested almost as if they had taken a stroll the seawall managing to sidestep the barge which is more of a landmark than anything else.

Mannas responded for the Rock at the 14:17 mark  that saw the teams play to a draw after one that saw Warriors tender Steve Fryer face 12 shots, while Rock tender Nick Rose stopped all 12.

Many were waiting for the Warriors to return after a long absence on the road that saw them added airmiles visiting Calgary, Panther City and a jaunt cross Canada to visit the Halifax Thunderbirds.

Anyone who has played sport understands that most road trips are more of a team bonding event, but for those playing at this caliber means taking time away from the family, which says lots about quality family time when home.

The games away saw them get outscoret means getting out to a quick jump, which they did but maintaining the lead is a different story.

Tonight’s second quarter saw the Rock chase Fryer to the sidelines replacing him between the piper with Whitby Ontario’s Alex Buque who allowed 2 goals earning 6 saves through two.

The third quarter started after an entertaining half only to have the Rock continue to hammer shot after shot with many wondering where’s the “D” or are they?

The Rock chased both teners forcing the Warriors to put Fryer back in with the third winding down managing to score six unanswered goals taking a commanding 12-2 lead entering the last quarter.

For those who thought the score was somewhat lopsided, the shots after the third quarter saw Toronto leading 45-27 with many wondering – simply wondering???

The third saw the Warriors play a stronger style game but on this night baring a miracle their simply wasn’t enough time left for the Warriors to upset the Rock.

While Toronto continued to drive the net managing to jump out to a 14-3 lead the Warriors never quit managing to get one while on a delayed penalty call going deep to the corner throwing it out front to hammer one past Rock tender pulling within 10 .

Toronto’s R. Hellyer has manage to hit the 9 point mark with 10 shots on goal while all Warrior players manage only 9 total

While the game had the chance to be one of the better more entertaining games on the season to date, on this night it was nothing unlike watching wrestling featuring the ROCK!!

The loss see’s Vancouver fall to 5-6 on the season, and remain in third place in the Western Conference with only seven games remaining.

Having the chance to catch up with some fans our conversation got around to uniforms and for all intensive purpose many feel that the Warrior uniforms are fall too dull and in need of a re-visit.

The Warriors drop this key game by a 14-5 margin to their eastern counterparts.

The Warriors next home game is March 25 against the Seals. which is country night featuring AARON PRITCHETT!