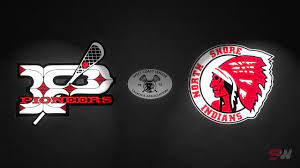 Locally, lacrosse playoffs are underway with the one we are focused on being the West Coast Sr. Lacrosse Association.

The finals are currently being played between the first place Ladner Pioneers and the North Shore Indians who finished second overall in season play.

The playoffs were to feature all five teams with the first place Pioneers getting a bye, which would see the second place team play the fourth place squad.

Thus the third place team would face the fifth place team, with the winner of the round  facing the Pioneers in the WCSLA final championship five game series.

For whatever reason the league was forced to change the playoff format, with Po Coq Saints and New Westminster eliminated from this year’s playoffs.

As things worked out the Victoria Shamrocks faced the North Shore Indians in the second round  with the winner facing the Pioneers in a five game series.

The final series started Tuesday (Aug, 2nd) following the long weekend with the series being played in Delta’s Sungod Arena due to minor  renovations at the Ladner Leisure Centre.

Regardless of location the series was touted to be both physical and aggressive with goal scoring being prevalent forcing each “tender” to come up with some stellar saves.

Game location means nothing when it comes to teams having a strong following and such was the case with both clubs that saw a large crowd on hand to take in the league final.

The series features the final series being “Live Streamed” by SportswaveTV/YareTV which are free to watch for those who are unable to make the trip to either arena.

The Pioneers pulled out a commanding 18-4 win with the series moving to North Van which had indications of more than a three game sweep.

Give that the Pioneers jumped out to 4-0 lead 4:32 in, it was North Shore who  were slowly clawing their way back in the contest, or so they were hoping.

The first twenty minutes saw the Pioneers take a 8-1 lead to the dressing room coming back to never look back and not wanting to make this a four or five game series.

The second was a much closer period with the Pioneers grabbing three goals while the Indians only managed two through 40 minutes.

The third was more of a physical contest with tempers flaring at times forcing the two officials to pull the players back in with six penalties.

At times emotion got the better of each team, but the end result saw the Pioneers pull out the 18-4 win through 60 minutes of play to the delight of fans who made the trek over the second narrows.

Game three has the teams square off in a “must win” game for North Shore Saturday night at 7 pm at the Sungod Arena.

Should North Shore manage to pull out a win, game four would be played Tuesday April 8th in North Van at 8 pm.

The Pioneers on the other hand are looking to wrap up the series in front of their home crowd, and if overall attendance means anything, we should see large numbers supporting both teams.

Should the Pioneers wrap up the series they would advance to the Nationals played August 28th to September 3rd in Leduc Alberta, located a short distance south of Edmonton.

The Pioneers are looking to make only their fourth consecutive trip to nationals that saw them finish sixth in 2019.

The Pioneers were the last BC team to win the championship in 2004.

If you are unable to attend in person you can watch the game which is being streamed free by clicking on this link.